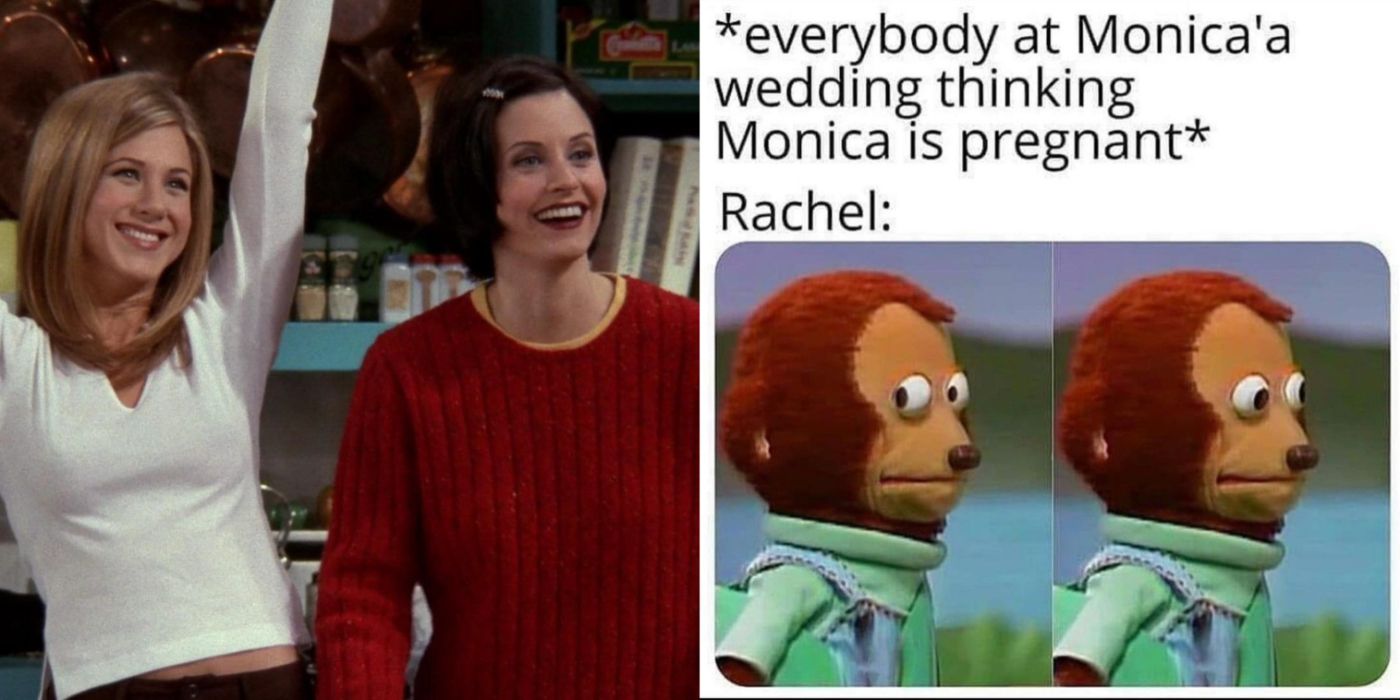 Jennifer Aniston recently opened up about her wishes for the third season of The Morning Show (via Variety). The actress would like to see her character, Alex, be more in the real world, which would be great character development. However, there’s still no information about what the audience can expect for this season, nor when the season will air. This show has become widely popular since it started streaming on Apple TV, mostly because of Jennifer Aniston and Reese Witherspoon’s excellent chemistry.

Funny enough, the two actresses had shared a screen previously during Aniston’s time on Friends since Reese played one of Rachel’s difficult sisters, Jill. However, even though Jill was an amazing character, Rachel spent way more time with Monica. They aren’t related, but these two characters really do act like sisters and fans are in love with their friendship dynamic.

They’re A Bit Too Involved In Each Other’s Lives

The characters from Friends are incredibly close, spending most of their free time together. They’re often aware of what’s going on in each other’s lives, whether their friends want them to know or not. When Rachel and Ross are having a huge fight, Monica and the others hide in Monica’s room, eavesdropping on the whole thing.

Even though sometimes they are not good at respecting each other’s privacy, it’s obvious Monica and Rachel just want what’s best for each other. Maybe they will have some fun about it for a while, such as when Rachel discovers Monica is dating Chandler, but in the end, they will be incredibly supportive.

They Have Very Different Personalities

One of the funniest running jokes in Friends is how different Rachel and Monica are. Whereas Monica is very organized and cautious, Rachel tends to be more messy and careless. When Monica trusts Rachel with the dessert for Thanksgiving, Rachel ends up making a disastrous concoction.

However, even though the two women tend to fight a lot, they are still the best of friends. Even when Rachel fails to reach Monica’s standards in almost every aspect of life, they don’t let these petty fights get in the middle of their friendship.

When Monica and Chandler start dating, they decide to keep it a secret from the other members of the group, which makes sense taking into account that their friends are extremely meddlesome. However, little by little people start discovering what’s going on, and no one takes it well.

Even though Rachel and Monica are best friends, sometimes they keep things from each other. Monica, for example, decided to explore her relationship with Chandler without telling anyone else. Still, Rachel is one of the first people to know, and she ends up being Monica’s Maid of Honor when she marries Chandler.

They’ve Been Friends For A Long Time

Even though at the beginning of the show Monica and Rachel had been distant for a while, the two women were friends since High School. When Rachel comes looking for Monica after leaving her fiancé on the altar, they pick up their relationship where they had left off.

RELATED: 10 Friends Episodes Where Ross Was The Funny One In Friends

The fact that they know each other since they were very young, makes their dynamic more interesting and intimate. They both know everything about the other, including some of their biggest insecurities, such as Rachel’s nose job. However, sometimes it also means they have a lot of baggage, such as Monica’s resentment of Rachel dating the boy she liked back then.

When a scammer robs Monica’s identity, the woman has a crisis about what she’s doing with her life. The fake Monica is living her best life, and Monica wonders why she’s not keeping up with her dreams and ambitions as well. However, it’s late at night, and Rachel just wants to sleep.

Monica and Rachel have very different perspectives on life: where Monica is an overachiever, constantly overthinking most situations, Rachel is more of a going-with-the-flow kind of person. Often, Monica gets obsessed with situations, and Rachel has a hard time keeping up with her.

One of the most iconic wedding episodes in TV history is when, in Friends, the group finds a pregnancy test during Monica’s wedding and everyone thinks Monica is pregnant. However, it turns out the one with a surprise pregnancy is Rachel, so Phoebe helps Rachel hide the truth.

Monica and Rachel’s closeness means their lives are often too intertwined, to the point where they often live life-changing events at the same time. Still, this episode opens the door for the following seasons’ dynamics, where Monica starts living her married life and Rachel becomes a mom.

From Ross having a crush on his sister’s high school best friend and the two of them dating as adults to their whole were they on a break or not discussion and their several attempts to reconcile later on and finally even having a baby together, Ross and Rachel probably have the most conflictive relationship in the show.

Even though Rachel and Ross are one of the most popular ships on Friends, it was hard for Monica to be in the middle of her brother and her best friend’s fights. Fortunately, Rachel and Ross managed to keep it friendly, without Monica ever having to pick a side.

They Live Together But Are Very Different

When Monica and Rachel live together, they fight a lot over their responsibilities. Whereas Monica is a person with very good habits, always keeping her house clean, Rachel tends to be more on the messy side of the spectrum.

This often creates problems between the two women, who have a hard time being on the same page when figuring out each other’s chores. Monica complains constantly about Rachel’s lack of organization and cleaning habits, which is a sore spot for both of them.

Their Thanksgivings Are Epic

This TV show is especially known for its emblematic Thanksgiving episodes, which are some of the most wholesome episodes in Friends. Everything starts when everyone’s plans go wrong, and they end up having a half-assed Thanksgiving in Monica and Rachel’s place. From then on, it becomes a tradition, and the group spends the day in the iconic apartment.

Even though all of them love each other deeply, Thanksgiving leads the way for a lot of chaos and problems. From Rachel ruining the dessert to Monica and Ross obsessed over their game of football, Thanksgiving is never a boring affair.

They’re The Best Of Friends

Since Rachel and Monica are truly the best of friends, Monica is the one in charge of organizing Rachel’s baby shower. However, she forgets one small detail: inviting Rachel’s mom, which ends up creating a huge conflict during the event.

Even though Monica knows Rachel more than anyone else, it makes sense that she forgot to invite her mom, since Rachel is not very close with her family. However, the conflict ends up causing a lot of anxiety for Monica, who doesn’t know how to deal with someone thinking poorly of her.

NEXT: 10 Memes That Perfectly Sum Up Each Season Of Friends

Denis Avahttps://bizgrows.com/
Denis Ava is mainly a business blogger who writes for Biz Grows. Rather than business blogs he loves to write and explore his talents in other niches such as fashion, technology, travelling,finance,etc.
Previous article
Lorde Ditched The Makeup For Her Seth Meyers Appearance
Next article
How Selena Gomez’s Red Carpet Style Has Transformed Since Her Disney Days