An Australian investment bank known as the ‘Vampire Kangaroo’ has snapped up a vital part of the UK’s gas grid.

Sydney-based Macquarie has taken a 60 per cent stake in National Grid’s gas transmission and metering business – a £5.76billion swoop which values the division at £9.6billion.

The network part operates more than 4,000 miles of gas pipes in the UK. 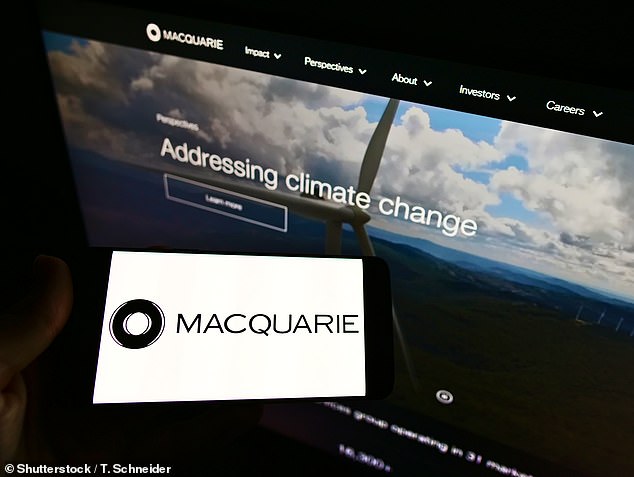 Concern: Macquarie has a  questionable track record of investing in some of Britain’s biggest firms

National Grid has been looking for an outside group to take a majority stake in the transmission unit.

But the presence of Macquarie will worry many in the City because of its questionable track record of investing in some of Britain’s biggest firms.

It earned its ‘Vampire Kangaroo’ nickname after developing a reputation for buying companies, loading them with debt and sucking out money for shareholders.

And it comes at a time when foreign investors are under scrutiny as fears grow that the UK is losing control of key businesses and infrastructure.

The sale places a crucial part of the gas network in foreign hands just as the energy crisis deepens. The deal will likely be referred to the Business Department to assess if it poses a security risk.

Macquarie, which teamed up with Canadian asset manager British Columbia Investment Management Corporation, said it expects completion in the second half of this year.

The consortium has an option to acquire the remaining 40 per cent of the business.

Macquarie has a swathe of UK assets and claims to have ploughed more than £50billion into UK infrastructure.

Over slightly more than a decade in charge, Macquarie paid out almost £3billion in dividends while amassing debts of £10billion and using a complex-corporate structure that meant it paid almost no corporation tax in the UK.

Macquarie’s Europe head Martin Bradley said the division is a ‘critical enabler’ of the UK’s transition to net zero.

Bradley said: ‘The transmission system will play a leading role in making the network ready for this transition.’