With The Crown season 5 set to premiere on November 9, Netflix has just released the trailer, and it clearly will not hold back on the controversial elements. In particular, the trailer hinted that the new season will be full of historical events and royal drama, taking place in the 1990s.

The new season will feature much of the relationship troubles between then-Prince Charles and Diana, Princess of Wales, which was the trailer’s focal point. And considering the show has its fictional aspects, the trailer showed many historical events, including the infamous revenge dress, the tell-all interview with former BBC journalist Martin Bashir, and the impact the insightful interview had on royalty and how they were perceived.

The Crown trailer starts with what is Windsor Castle completely ablaze, with Queen Elizabeth II looking on at the flames in dread as they engulf her favorite residence. Hence, this scene will likely focus on the Queen’s misfortunes and low points during this decade, especially given the major headline regarding the commotion within the royal family.

According to Royal Collection Trust, the fire broke out in November 1992, lasting for fifteen hours and destroying 115 rooms in the castle. Although most of the artifacts of great importance were rescued from the blaze, a couple of pieces were still lost. The blaze was unfortunate and required a lot of man-power to be put out, but also gave the opportunity to modernize some aspects of the castle, which the Duke of Edinburgh undertook. After five years, renovations to the castle were complete.

At the end of the trailer, there was a quick glance at the cameras and chairs in place to prepare for the 1995 Martin Bashir interview. The trailer depicts the two sitting down, ready to discuss Diana’s experience as a royal. Of course, this is one of the most anticipated moments to feature this season, given how the actual interview erupted in real life and put the royal family in a tricky position.

With Elizabeth Debicki taking over the portrayal of Diana from Emma Corrin, her interview with Bashir was very daring and was considered to be completely against the values and norms of the royals. However, Diana knew this and was determined to tell her side of the story, including information about her marriage to the then Prince of Wales and his longstanding liaison with Camilla Parker-Bowles.

The Deterioration Of Royal Marriages

The trailer pays a lot of attention to the deterioration of Wales’ marriage, along with the strain this has on Queen Elizabeth II and the royal family as an institution. And though the previous season had set the stages for the doomed marriage, season 5 will likely show the worst of it, and Prince Charles and Princess Diana’s failed marriage wasn’t the only one to lead to a divorce.

Related: 10 Best Films And Series About Queen Elizabeth II, According To IMDb

The 1990s saw an end to three of the Queen’s children’s marriages, something that was almost wholly unheard of previously. In 1992, Charles and Diana announced their official separation (via History), and that same year, Prince Andrew and Sarah Ferguson announced theirs (via BBC). On top of this, the Queen’s daughter finalized her divorce from Mark Phillips and then married her second husband, Timothy Laurence, the same year. It is unclear how much the new season will focus on the other couples, given how the trailer puts Princess Diana front and center, but it will likely be referenced.

During the trailer, there is a voiceover of the Annus horribilis speech, describing how 1992 has been a year for Elizabeth II to reflect. This is heard over the scene where there is a fire at Windsor Castle.

In November 1992, Elizabeth II delivered a speech now referred to as Annus horribilis. After the traumatic year that saw part of Windsor Castle burned down and the breakdown of three of her children’s marriages, Elizabeth looked back on the year with reflection. 1992 was arguably one of the worst years for the royal family, and it appears that season 5 will dedicate most of its time to that period to show how their lives changed drastically and the public’s perception of it. This will happen with Imelda Staunton taking over the portrayal of Queen Elizabeth, showing the family near rock bottom.

An important scene that some people may have missed is a quick glimpse of Diana with Mohamed Al-Fayed, Dodi Fayed’s father. Though Dodi is not pictured anywhere in the trailer, he is clearly shown out of sight when Diana smiles, alluding to the season possibly showing how their relationship started.

According to Cosmopolitan, Dodi and Diana first met at a polo match where Dodi and Charles were on opposite teams, though this happened in 1986. While season 5 will clearly cover most of the early 1990s, they didn’t start their relationship until 1997, 11 years after they first met. This suggests that the Netflix series may make liberal changes to the timeline of their relationship, but nevertheless, it will be a major plotline in season 5.

Many fans have been waiting for the biggest fashion moment in Princess Diana’s life, and the trailer delivered with her arriving at an event, wearing an off-shoulder black dress. This has since been dubbed as the revenge dress, in which the event happens just around Prince Charles’ interview with Jonathan Dimbleby admitting to his infidelity (via Hello Magazine).

This is one of the most well-known accounts, given speculations at the time of Princess Diana and Prince Charles’ rocky relationship. This carries over in other historical events depicted in the trailer as Diana starts to open up about her marriage and attempts to stick up to the royal family with these daring stunts. Considering The Crown is one of the best shows about the royal family, this season will see how the core members struggle with Diana’s popularity, especially after this incident. 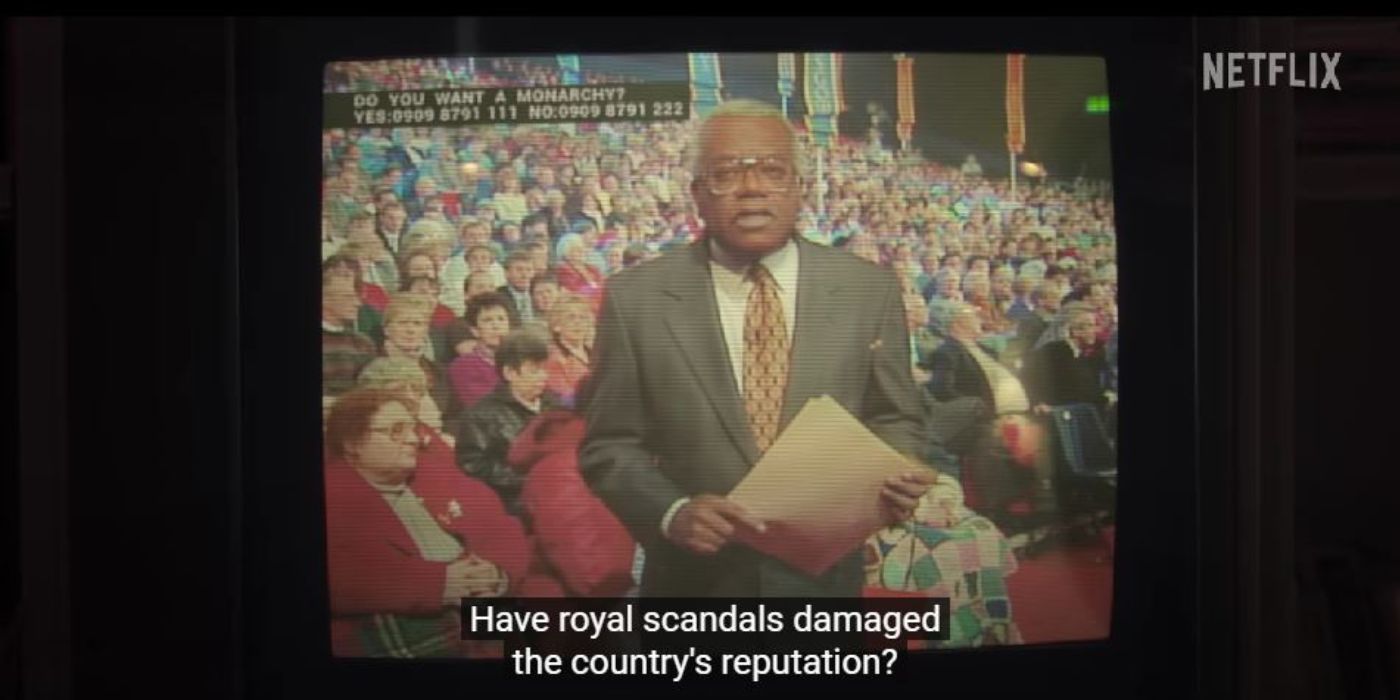 The trailer depicts various news articles and reporters, one of them being prominent journalist Trevor McDonald. Addressing the camera, McDonald asks, “Have royal scandals damaged the country’s reputation?”

Throughout The Crown, the royal family has struggled in a new and invasive age of the press. The scrutiny appears to be at its peak during this period, during which Diana and Prince Charles’ marriage was the main headline. McDonald’s presence indicates more difficulties have yet to come, especially with Diana, Princess of Wales’ separation from Charles, and their ultimate divorce.

Within The Crown‘s season 5 trailer, there are evidently many celebrations present, likely showing the family’s attempts to keep up appearances despite the scandals. Though it is unclear which events they are as it was a whole montage of them, the likeliest is the Ruby Jubilee, marking Elizabeth II’s forty years on the throne. This is the same event where the Queen will address the famous Annus horribilis speech, and given how the trailer has featured moments from that year, this again indicates that season 5 will observe most of its plots in 1992.

While the speech and event are meant to be a celebration of the Queen’s reign, 1992 was definitively not commemorative, as hinted by the trailer. Given that the show started with Queen Elizabeth’s rise and evolution, the trailer surprisingly shows too few moments of her. It highlights how the transgression has overwhelmed the monarch and how the spotlight shifted from her to Diana.

With Jonny Lee Miller portraying John Major in The Crown season 5, he appears several times in the trailer but as a shadow behind the royal’s fiasco. Considering that the previous season showed the political climate left behind by Margaret Thatcher, Major will likely pick up the pieces from his party in the 1990s.

Like other Prime Ministers in the past seasons, Major will likely provide more commentary about the royal troubles, especially as the country is still dealing with the economic turmoil from Thatcher’s term. More importantly, given all the issues this decade, season 5 may highlight a political shift and public distrust with the Conservative party, as the Labour Party eventually gained prominence in the mid-1990s. With Bertie Carvel cast as Tony Blair, the PM after Major, that could be the case, although that entirely depends on where season 5 plans to stop in terms of its timeline.

Denis Avahttps://bizgrows.com/
Denis Ava is mainly a business blogger who writes for Biz Grows. Rather than business blogs he loves to write and explore his talents in other niches such as fashion, technology, travelling,finance,etc.
Previous article
Here’s Why a Solid Gold Cube is Just Hanging Out in Central Park
Next article
Things to do in Kedarkantha Trek

How To Create A Minecraft Realms Private Server