Investment platform AJ Bell has simplified charges across an assortment of funds as part of efforts to provide ‘greater clarity and certainty’ for investors.

The Greater Manchester-based firm revealed that all six of its growth funds would now have a 0.31 per cent levy, compared to previous charges that ranged between 0.30 and 0.34 per cent.

At the same time, its two income funds will see their charge rate drop from 0.68 and 0.69 per cent, respectively, to 0.65 per cent, and its Responsible Growth Fund would see its rate drop slightly to 0.45 per cent. 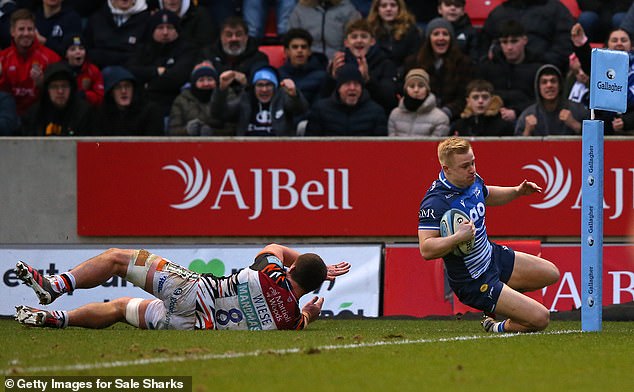 Scored: Manchester-based AJ Bell has simplified the charges across its assortment of funds

The fee cuts come amid heavy competition between British retail investment platforms for new customers, many of whom have come to investing for the first time since the coronavirus pandemic started.

Kevin Doran, the group’s chief investment officer, said the new arrangement on charges would provide ‘greater clarity and certainty’ and would result in most customers seeing cost reductions.

He added: ‘The new model ultimately means cost cuts for most customers and fixes our pricing extremely competitively versus peers.

‘Over time, we expect that with continued fund asset growth, we will be able to take advantage of economies of scale and decrease the level of the fixed OCF, further delivering value to customers.’

About a fortnight ago, the FTSE 250 firm published its first-quarter trading results, which showed its total customer base verging close to the 400,000 mark after growing by 27 per cent over the preceding year.

Assets under administration were also over a fifth higher at £75.6billion, and rose 4 per cent between October and December despite the UK being under relatively soft coronavirus-related restrictions for most of the time. 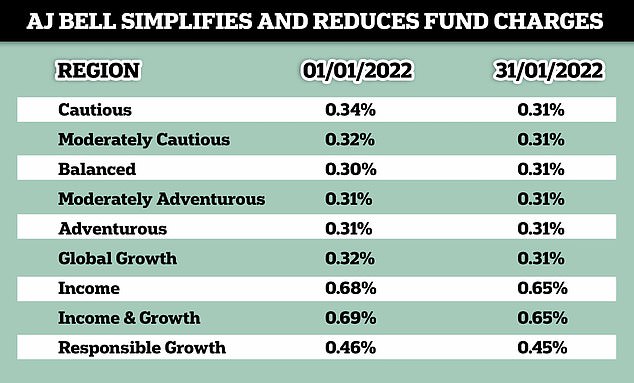 Streamlining: AJ Bell revealed that all six of its growth funds would have a 0.31 per cent levy compared to previous charges that ranged between 0.30 and 0.34 per cent

The company is hoping to further capitalise on the growth in Britons trying out investing through launching a new app called Dodl, which will allow people to buy and sell investments free of commission charges.

Investors will only be allowed to put their money behind 50 UK shares and 30 funds initially, including AJ Bell’s Responsible Growth Fund, before introducing some popular US shares soon afterwards.

The only fee that they will have to pay is an annual 0.15 per cent charge on all their investment accounts, meaning an individual with £10,000 in Dodl would only pay £15. The app is set for launch sometime in the first half of this year.

AJ Bell founder and chief executive Andy Bell has said it would suit ‘anyone looking for a low-cost, easy-to-use investment app to help them meet their investment goals such as saving for a house deposit, holidays or retirement.

‘The intuitive investment journey and streamlined investment range will appeal particularly to those that are new to investing and want a simple way to manage their investments.’

Shares in AJ Bell were down 0.6 per cent to 323.2p during the mid-afternoon on Friday, meaning their value has fallen by over 14 per cent since the start of 2022.