Deep freeze for Moscow: The tough financial sanctions on Russia will cost us too… but it’s a price worth paying, says ALEX BRUMMER


Vladimir Putin plainly believed that a Western alliance that fled Afghanistan, failed to challenge China in Hong Kong and is heavily dependent on Russian energy and wheat would lack the fortitude to challenge Moscow over the vicious assault on Ukraine.

The Russian president has been proved wrong and with each escalation of the military attacks the financial noose has been tightened.

The EU and G7 governments decided that even if sanctions are painful for their own populations it is a price worth paying to isolate the Kremlin and support Ukraine. 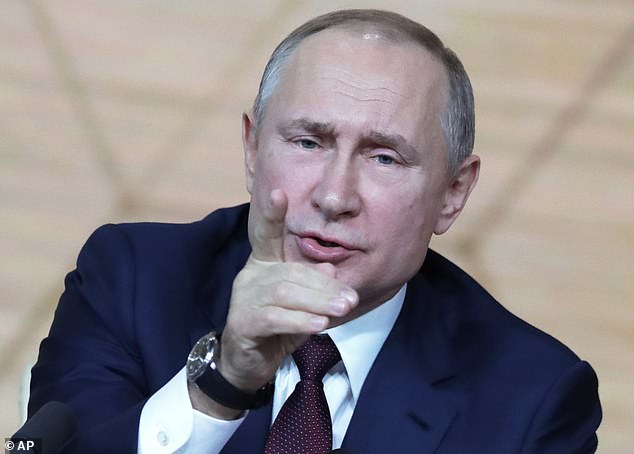 War chest: The best estimates are that since the invasion of Crimea in 2014 Vladimir Putin has built up foreign currency and gold reserves of $630bn or (£470bn)

Last night Shell added to the agony when it joined BP in abandoning its investments in Russia.

No one is going to regret the clampdown on oligarchs and ‘Londongrad’. Closing down the laundromat should have happened long ago, even if it is a severe blow to the demand for butlers, security guards, bullet-proof Range Rovers and fortified homes in Kensington and Knightsbridge.

Even Chelsea supporters (like this writer) need to come to terms with the idea that ownership by Roman Abramovich, for all his charitable giving, is being rebased.

By far the most important step taken so far to freeze Russia out of the financial system is that taken by the central banks of the US, EU, Britain and Canada.

The best estimates are that since the invasion of Crimea in 2014 Putin has built up foreign currency and gold reserves of $630billion (£470billion).

This was seen as a fighting fund, enabling the Central Bank of Russia to combat a run on the rouble and to hold out against a Western trade blockade.

What has emerged is that between 40 per cent and 50 per cent of these reserves are not actually in Moscow but are on deposit with Western central banks and effectively frozen.

The Swift system is being denied to Russian entities, which means that the documentation required to receive foreign payments has been closed down.

A gap in this edifice is the need of Germany and other European nations to pay for energy if pipelines to the West are to remain open.

Among Putin’s measures, designed to give him some independence from Western capitalism, has been to build up holdings of 1,900 tons of gold, making Russia the sixth largest holder of bullion in the world.

Even if most of this hoard is in the vaults in Moscow (unlikely, given the way that bullion markets work) it is largely inert as a means of exchange.

It cannot support the rouble on foreign exchange market nor can it be used as collateral to raise bonds on financial markets now that Moscow has been all but outlawed from borrowing overseas and from the main clearing houses.

One potential source of funding is China, which is buying Russian gas. But it is not clear that President Xi is that interested in bolstering Putin’s hold on power, as is evident from its abstention on the UN Security Council attempt to censure Putin. Not voting does not signify support.

Locking Russia outside the global financial system will not be at a cost-free enterprise. Western banks are exposed to $29.3billion (£21.7billion) of loans to Russia and overall claims on Russian entities are put at $89billion (£66.4billion) by JP Morgan.

As damaging as that may be to some individual Western banks and Russian banks it is hardly comparable to the $36trillion (£26.8trillion) of debt financing on the books of the global banking system at the onset of the 2008 financial crisis.

History tells us that of all the measures taken by Western governments against rogue regimes, financial sanctions are most effective.

It was not until South Africa was excluded from the money markets that the apartheid regime finally crumbled.

President Trump’s decision to exclude Iran from financial transactions brought ordinary people onto the streets of Tehran in protest against the Ayatollahs as the currency sank and food prices soared.

As a global powerhouse for wheat production, Russian citizens should not go short of bread any time soon. Nor are they going to freeze in their homes, given plentiful supplies of energy.

Nevertheless, the 30 per cent decline in the rouble will be painful. The currency will buy fewer goods, and inflation will soar.

Interest rates of 20 per cent, designed to support the rouble, will hobble such domestic credit as there is. Moscow has been hoisted by its own petard.