ALEX BRUMMER: Europe and Britain are split on inflation risk


In the aftermath of the financial crisis, the European Central Bank (ECB) led the way in raising interest rates to combat inflation.

It then reversed itself as Greece threw the whole euro area into paroxysm.

This time around, in spite of agitation from Germany among others, the ECB’s president Christine Lagarde is choosing to look through a 5.1 per cent rise in consumer prices in January, and is not planning to raise interest rates until quantitative easing grinds to a halt later in the year. 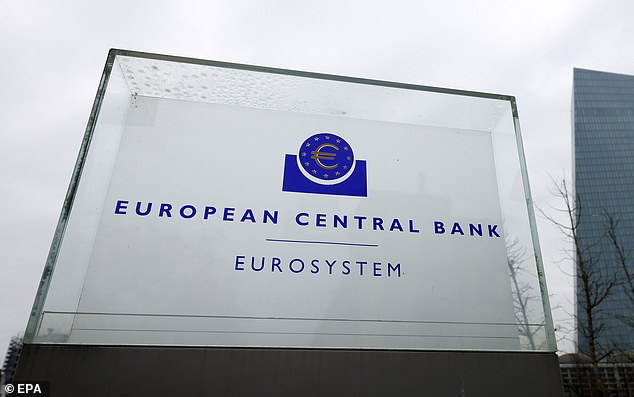 Holding firm: The European Central Bank is not planning to raise interest rates until quantitative easing grinds to a halt later in the year

The attitude looks to be: Cost of living crisis – what crisis?

In contrast, the UK is on edge. Black Thursday is set to reveal a sharp rise in average energy bills for the 11m or so consumers who have been protected until now by Theresa May’s price cap.

In addition, Bank of England Governor Andrew Bailey is expected to sharpen his inflation-fighting claws with a second interest rate rise from the emergency rate of 0.1 per cent, which prevailed throughout the pandemic, to 0.5 per cent.

There will be a noisy political response from all those on cheap mortgage rates, which have sent house prices higher, with the Nationwide reporting a 0.8 per cent rise in January 2022 and an 11.2 per cent jump over the last year.

Low-cost mortgages fuelled a residential boom, placing many homes beyond the reach of first-time buyers. If higher rates were to curb the enthusiasm driving the housing market, it would be no bad thing.

The higher energy prices will be a blow to every household. And the Government will be well advised to make sure those struggling with their bills get more direct help through the warm homes discount and special measures for the elderly.

Before anyone becomes too agitated, it is worth recording that with the jobless rate at 4.1 per cent and more than a million job vacancies out there, households at least have incomes.

Moreover, the panic saw a huge build-up of pandemic savings of £200billion, which gives those citizens fortunate enough to have some insulation against freezing in their homes.

The difficult judgement for the authorities is to better understand how long the current rise in prices will persist.

The ECB takes the view that if volatile food and energy prices are excluded from the consumer index, then underlying inflation at 2.5 per cent is actually declining.

The big risk is that tension over Ukraine spills over into conflict and tit-for-tat embargoes, which cause Russian gas pipelines to western Europe to be closed down, and a new round of soaring prices.

COP26 notwithstanding, there is no shortage of fossil fuel supplies and increasing volumes of American liquefied natural gas are finding their way to Europe.

The strength of the labour market in Britain, the UK and even much of Europe could lead to demands for cost-of-living deals and hard-wire higher prices.

Trades union membership halved in the UK over the past four decades, and disputes tend to be confined to rarefied groups such as teachers at the privileged Girls’ Day School Trust and Unite members at the Financial Conduct Authority.

These are irritating clashes but unlikely to bring the economy to a grinding halt and force across-the-board pay rises.

The biggest ‘known unknown’ is the long-term impact of loose monetary policy and how it feeds into future prices. Bailey and Federal Reserve chief Jay Powell are taking no chances, and tightening the noose.

The challenge for Lagarde and the ECB is to keep German monetary astringency at bay.

She must also execute a strategy across a 19-country bloc where inflation ranges from 12.2 per cent in Lithuania to just 3.3 per cent in France, which is protected from wholesale gas prices by nuclear generation.

The UK has bungled its energy policy. But at least it can exert a measure of control over the cost of living.

A crescendo of support is building for a windfall tax on energy firms.

Support comes from Robert Halfon MP on the Tory benches and Greenpeace, which says a new tax could raise £4billion.

The agitation will be reinforced by bumper profits to be unveiled by Shell which will be uncomfortable reading for drivers and citizens struggling with energy bills.

All that a windfall tax will do is impair investment in new greener resources, which could eventually cut bills, and deprive pension funds of a rich vein of income.

Critics should be careful what they wish for.