ALEX BRUMMER: Putin’s war doesn’t just hurt his own people and those of the Ukraine, it damages us all

Financiers cannot say they were not warned. US intelligence provided an unprecedented running commentary on the Russian military build-up around Ukraine.

No country mobilises 150,000 troops and heavy equipment without a murderous intention to invade.

The assumption among investors was that diplomacy would triumph or that there would be minimal Russian incursions into Ukraine. 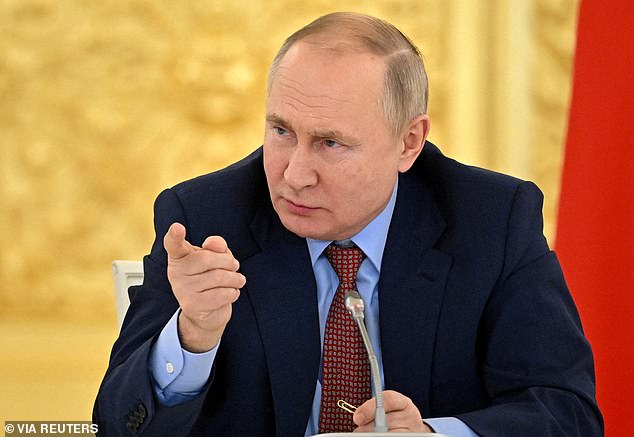 They reckoned without an unhinged autocrat in Vladimir Putin, infused with ancient hatreds.

As a consequence, the hit to financial markets across the globe is genuinely shocking. It is sobering to remember that on the outbreak of the Great War, the jolt to the City was so profound that the London Stock Exchange ceased to operate and bond markets closed.

The most damaging blows are to the rouble, which fell to its lowest ever level in the face of a support operation by the Russian central bank, armed with reserves of £368billion.

So it does have considerable firepower. Russian natural resource stocks, big on the London exchange, slumped as much as 50 per cent before rallying ahead of the close.

Moscow equities plunged 33 per cent. Indexes across the world were sharply down as investors girded their loins.

Oil and gas prices rocketed on the assumption that supplies to Germany and the West will be sharply interrupted.

There was renewed faith in gold bullion which soared 13.7 per cent.

The energy price hike creates a horrendous problem for central banks. It makes the challenging task of putting Western inflation back in its box much harder and risks high energy prices becoming hard-wired, causing a wage-price spiral.

Central banks acted in a co-ordinated fashion at the start of Covid-19 a year ago, to lower interest rates and support jobs and enterprise, and might be expected to do so again as war in Europe erupts.

Options are limited because of the vast amount of money printing and emergency low interest rates at the European Central Bank in Frankfurt and the Fed in the US. Only the Bank of England has given itself some flexibility.

Raising rates into the biggest European war will batter the post-Covid recovery.

Putin not only traumatises his own people and those of the Ukraine, he damages us all.

Unfinished business for Antonio Horta-Osorio when he left Lloyds bank last year was the fall-out from the large scale fraud at the former HBOS branch in Reading.

Lloyds has spent five years reviewing claims for compensation from former customers. It struggled to get to the finish line.

As deleterious has been Lloyds’ lack of clarity about who at the top echelons at the bank knew what about Reading and when.

This is the subject of a semi-judicial inquiry by Dame Linda Dobbs. New-ish chief executive Charlie Nunn plainly felt it was time the bank put a figure on the potential bill.

At £600million it comes at a heavier cost than many expected.

The personal toll, should it be discovered that former or current executives engaged in a cover-up, could be horrendous.

Efforts to brush matters under the carpet and assume the problem was over at the time of the 2007 fraud trial have been unedifying.

As for Lloyds’ 2021 results, they must be regarded as sub-octane amid a bumper season.

Nunn at least is showing ambition with a £4billion digital and wealth management investment plan designed to wean the bank away from dependence on traditional income streams.

If interest rates do rise, at the pace the market was expecting before Ukraine, then higher margins and ‘endowment’ profits from current accounts will be the big earner.

It was always thus for the banks.

As the chief executive of one of Britain’s most strategic companies, Warren East chose a red letter day to announce his departure from Rolls-Royce.

It has been a leadership challenge which East confesses became scary when Covid turned positive cash flow of £1billion pre-pandemic into a terrifying outflow of £4.5billion in 2020.

That has now been turned around with flying hours – Rolls-Royce’s income generator – up 60 per cent in 2020 and expected to rise a further 50 per cent this year. Ukraine could take a 3 per cent or more bite out of that.

East’s parting gift is the company’s survival almost intact. But he also planted the seeds of a next generation Rolls featuring electric engines and small modular nuclear reactor. Chocks away.