There is no mystery as to how to crush inflation.

You follow the path taken by the late Federal Reserve chairman Paul Volcker in October 1979 when he imposed a draconian monetary squeeze on the US and raised interest rates producing a crushing recession.

It resulted in economic desolation in Ronald Reagan’s first term until the president’s supply side tax cuts and a splurge on defence turned the tide. 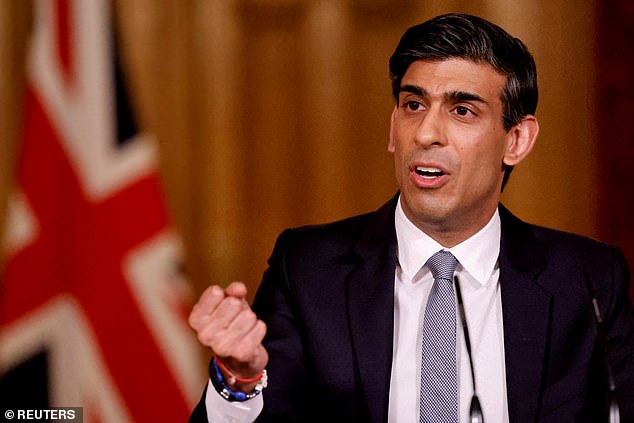 In the decades since Volcker pulled the emergency cord there have been dramatic changes in labour markets.

Cost-of-living pay rises, once the starting point for collective bargaining, have been vanquished. The unions are less relevant and disputes confined to minor skirmishes with private sector employers.

That doesn’t mean that the prospect of consumer price inflation roaring towards seven per cent later this spring doesn’t have to be tackled.

The Bank of England has started to tighten policy. A further interest rate rise from the 0.25 per cent bank rate is now signalled by the money markets later this week.

Across the Atlantic and on the Continent, similar monetary hardening is on the way. What is contrary to good sense is the double-whammy of using the interest rate weapon and tightening fiscal policy at one and the same time.

The rise in national insurance contributions (NICs) is calamitous in its scale, raising some £14billion net from employers and employees. It is also muddled.

In defence of the NICs increase, Boris Johnson and the Chancellor Rishi Sunak argued it was necessary to deliver more beds and procedures in the NHS.

It is also justified in terms of the need to restore the budget to good health and to reform social care.

The reality is that imposing a monetary and fiscal squeeze on the economy ensures that the much-trumpeted best performance for Britain among the G7 in 2022 will be endangered in future years.

Among the lessons of the post 2008 financial crisis is that the fiscal squeeze condemned the nation to almost a decade of sub-octane output.

The best gift Downing Street could give to the nation now, far more significant than moving the deckchairs in the Downing Street gardens, would be to cancel an unconscionable rise. That would give growth, animal spirits and recovery a chance.

Vodafone, originally a spin-out from Ernest Harrison’s Racal group, should be one of Britain’s most exciting tech creations.

Not only was it at the forefront of mobile telephony, it was also acquisitive buying stakes and ownership in cellular systems across Europe and in the US.

The accumulation of goodwill and debt on its balance sheet led investors to demand change.

The result was hasty withdrawals from Japan and then, most spectacularly, the US, just at the much-anticipated point cell-phones became the computer in the pocket from which its former US joint venture partner Verizon has benefited enormously.

The result is that Vodafone has shrunk in value, scale and ambition when it could have been, with more patience, a world leader.

It now finds itself with few places to go with activist shareholder Cevian on its tail. The attentions of agitators can be useful if they prompt timid managements to take faster and bolder steps.

Over the last five years, Vodafone (says Refinitiv data) has delivered total returns of minus 4.7 per cent against plus 28 per cent for the underperforming FTSE 100 index.

This is in spite of floating off its pylons infrastructure offshoot in Frankfurt.

The difficulty for technocrat chief executive Nick Read is that he is running out of options.

More spin-offs, such as Africa, are possible but would be value destructive over the longer term. Acquiring rivals in the UK and on the Continent might improve pricing power.

But competition regulators are unenthusiastic about deals in the UK, which might harm consumers.

The better solution for Vodafone is better and cleverer marketing, improved content and best in class tech and customer service.

The hour glass is draining fast.

Climate change may be the greatest challenge facing the world but former governor of the Bank of England Mark Carney needs more. He is joining exclusive consultants Macro Advisory Partners as senior counsellor.

There he will be working alongside Goldman Sachs alumni, former diplomats and government officials. And the clients? Your guess is as good as mine.