New data from the Office for National Statistics shows that more than two-thirds of UK households reported cost of living rises in the latest month, with energy the most important factor.

Food prices are also rising because of supply chain bottlenecks, and are particularly iniquitous because they hurt the least well-off in society the most.

In recent times UK consumers have been largely protected from increases in food prices by intense competition. 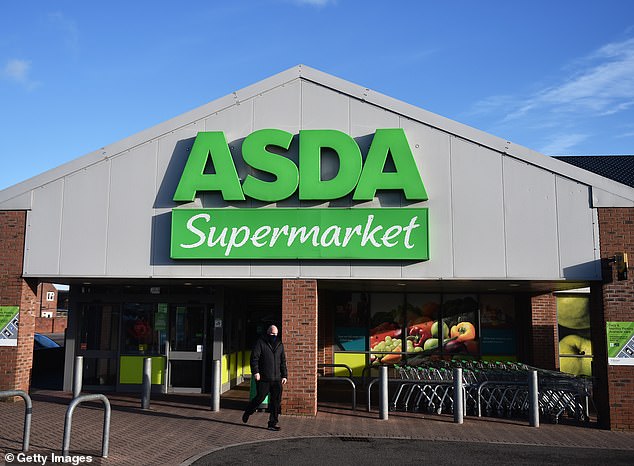 Burdened: Both Asda and Morrisons are affected by the albatross of debts around their necks as a the result of their private-equity buyouts

The build-up of market share by German no-frills retailers Lidl and Aldi, which between them have acquired 14 per cent of UK grocery, has put them in spitting distance of Asda and Sainsbury’s, and well ahead of Morrisons, which has 9.9 per cent.

The incursion by Lidl and Aldi has meant intense rivalry which has kept prices low. The takeovers of Asda, followed by Morrisons, by private equity backed investors is transforming supermarket economics.

Both Asda and Morrisons are affected by the albatross of debts around their necks due to the buyouts.

The result is that they are less able to compete on price with the German discounters or the biggest beast, Tesco.

In the last three months Tesco increased its share of the UK grocery market, from 27.3 per cent to 27.9 per cent, according to latest Kantar data.

Tesco chief executive Kevin Murphy has spotted an open door and looks to be rushing through. It has decided it no longer needs discount outlet Jack’s, created to take on Lidl and Aldi. Tesco and can compete directly using its core store portfolio.

Nor does it want to preserve upmarket delicatessens. It is shaving costs by putting 1,600 night shelf stacking roles on the endangered species.

All of this will enable it to keep prices down at a time when the cost of produce and ingredients are rising.

When the Competition and Markets Authority nodded though the takeover of Asda by the Issa brothers, backed by TDR Capital, and Morrisons, backed by Clayton Dubilier & Rice, it signed away lower prices for UK consumers.

To pay down the debt of geared-to-the-gills Asda and Morrisons, in an era of higher interest rates, is going to mean a squeeze on margins, cutbacks in investment and jobs and avoidance of becoming involved in price wars.

It is also why a proposed sale of Boots by Walgreen to private equity should be firmly resisted.

Rio Tinto long has been considered the most blue-chip of the mining giants quoted on the London Stock Exchange.

Its annual report is festooned with data testifying to its adherence to environmental, social and governance standards (ESG). It boasts zero fatalities, $1billion (£735million) on climate change projects and 26 per cent of women in senior positions.

It must have long believed that what happens in Western Australia, its biggest source of global revenues, stays there.

The hyperbole behind the £86billion-quoted giants’ claims bears no resemblance to conditions on the ground. The report by former Australian sex discrimination commissioner Elizabeth Broderick is horrific.

It reveals a despicable culture of bullying, sexual harassment, including rapes and racism, totally out of keeping with societal norms.

To the credit of chief executive Jakob Stausholm he has agreed to implement reforms proposed in the report.

But it is hard to believe that senior executives, often on the ground, are unaware of the toxic Wild West morals and did nothing about them.

Erasing the deeply ingrained racism and misogyny is a mammoth task, and re-education and transparency on ESG is demanded at all levels.

In an effort to lure back younger viewers from streaming the BBC is relaunching BBC Three with brilliant attractions such as tractor racing from Belfast.

The forces and budgets it is competing against are mind-boggling. HBO Max, Warner Media’s streaming service, is going big across Europe, launching in 15 countries from Poland to Portugal. It won’t be coming to the UK, for the time being, because of its content deal with Sky.

That won’t stop tech-savvy millennials from finding a back door.