The reality is that it is financial pressure on Russia which is most likely to undermine Vladimir Putin and force change in the Kremlin.

At the start of the crisis it was assumed that Russia was well insulated by its £471billion of gold and foreign exchange reserves. 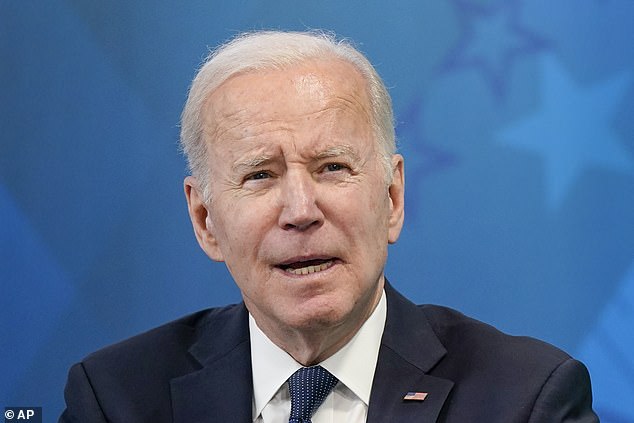 Crude move: President Biden announced the US is to embargo Russian oil as it bids to pile more financial pressure on Russia following the invasion of Ukraine

What is unknown is how useful these reserves will be in keeping the Russian economy ticking over as access to other cash is blocked off by is exclusion from the Swift money transfer system and closure of overseas branches of the country’s banks.

As a means of exchange, gold reserves are not practical if they cannot be turned into hard cash. It is likely that a proportion of the war chest is held in foreign assets, such as US Treasuries and other government bonds, and in bank deposits held overseas and no longer accessible.

Surging oil and gas prices are already dealing an economic shock to the global economy and real incomes.

What is more obscure is the potential financial fallout from the Ukraine invasion and whether there is a Northern Rock or Lehman out there, which could send a shock wave through the financial system.

Western banks are in a much better position to absorb unforeseen jolts than before the financial crisis of 2007-09.

With the help of shed loads of money printing, the banking system came through the pandemic relatively unscathed.

There is already some fallout from Russia. Italy’s UniCredit reports that it faces £5.9billion of loan losses in an ‘extreme scenario’.

Overall it has £6.6billion exposed to Russian consumers, a further £3.8billion in cross border exposures as well as modest derivatives at risk.

France’s BNP Paribas has revealed £2.8billion of exposures to Moscow. What is not known is where the pieces will fall when the effect of sanctions against the oligarchs and others come into view.

Citigroup, ING and JP Morgan are among lenders reviewing lending to telecoms firm Veon in which oligarch Mikhail Fridman has been involved.

The grounding of Airbus and Boeing jets, which Russia has shielded from seizure, has put assets at risk.

The nearly 500 aircraft are estimated to have a value of £7.6billion and there is concern as to whether they will ever be recovered.

None of this is decisive. But the accumulating list of knowns about the financial impact of sanctions becomes more threatening by the day.

The transition at the Pru from chief executive Mike Wells is proving less than smooth.

Normally when a highly regarded boss stands down, after a long period in charge, good governance dictates that a successor has been identified.

It is surprising that a board headed by someone as experienced as Baroness Vadera was so unprepared.

There is still no word on the next permanent chief executive, and finance boss Mark FitzPatrick will hold the fort. The only firm commitment is that there will be a management tilt towards Hong Kong.

That looks unwise at present given that the territory is all but locked down by Covid. This doesn’t appear to trouble the Pru which says: ‘We have great faith an belief that Hong Kong will bounce back from this.’

Maybe, but whether Hong Kong can recover from the iron grip of Beijing and the clampdown on freedoms, which has led more than 100,000 Hong Kong citizens with British National status to flee to London, is a moot point.

At least the Pru, with its rich British heritage, is not planning to move its listing. It needs people in London to deal with debt sales, reporting requirements and service the needs of shareholders some 40 per cent of which are British-based.

That’s a relief, but does not guarantee that the next chief executive won’t cut and run at the first opportunity.

Any counter bid in the current turbulent market is remarkable.

So it is not surprising that the board of Stagecoach jumped at an offer from German asset manager DWS Infrastructure, at a cash offer at 54 per cent premium to the pre-bid price, for the bus company.

Fascinating that co-founder Ann Gloag is irrevocably tendering her shares to DWS while brother Brian Suter has committed to the National Express all-share merger deal.