Military conflict down the ages often is a result of adversaries misreading signals. The Russian troop placements around Ukraine threaten to spin out of control, amid a lack of coordination as major Nato players conduct their own private diplomacy.

Markets, having steadied from the pandemic, must absorb the inflation shock and face up to strategic menace.

The potential financial consequences are starting to dominate sentiment. The most obvious manifestation for the UK is the very real risk of even higher gas prices and the surging cost of petrol at the pumps. 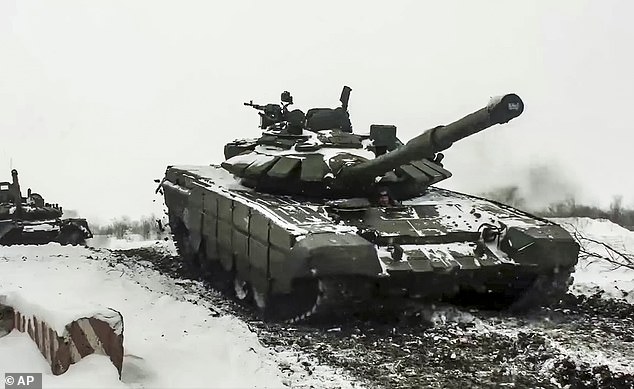 Manouvers: Russian tanks on a military exercise in the Rostov region close to Ukraine last month. Markets around the world have been hit as tensions threaten to escalate

The oil price, at $96 a barrel for Brent crude, is sizzling at a seven-year high and Russia’s role as a big producer makes it hard for the International Energy Agency to be effective in balancing supplies.

Geopolitical events push investors into safer havens. That means higher demand for tangible assets such as oil and gold and greater demand for government and top-rated corporate bonds.

The desire for safer assets creates its own set of conflicting forces.

Before Ukraine jumped to the top of the global risk agenda bond rates were rising because of inflation worries. A flight to quality could lead to havoc in credit markets.

Unrated high-yield bonds – debt raised by private equity firms and corporate bonds in emerging markets, some of which has been securitised – are all in the danger zone.

More directly in the line of fire is the banking sector, with much talk of financial sanctions, including closing the Swift transfer network to Russia from Western finance.

Italian and French banks each had exposures of $25billion to Russia in the third quarter of last year and Austrian banks $17.5billion.

In contrast the United States, home to the world’s biggest lenders, has a relatively modest outlay of $14.7billion of loans according to Basle’s Bank for International Settlements data.

JP Morgan research suggests Italy’s Unicredit, Socgen of France and ING of the Netherlands might be vulnerable to loan losses.

There is no comfort to be drawn from any of this, in that a localised eruption in a globalised world invariably causes quakes through the whole financial system.

UK investing platform Hargreaves Lansdown reports a sharp fall in confidence in the last month, fuelled by inflation and Ukraine.

Brinkmanship and the disruption of some air routes place travel, bank and car shares among the biggest losers. Don’t count on a post-pandemic bounce any time soon.

Among the lessons of the implosion at Neil Woodford’s investment empire in 2019 and the subsequent, unrelated collapse of Greensill Capital in 2021 is the work which the regulator, the Financial Conduct Authority (FCA), outsources to third-party enforcers.

At Woodford, responsibility for making sure that funds kept to the rules in terms of liquidity fell to authorised corporate director (ACD) Link Fund Solutions.

It is fascinating to learn that the Woodford funds’ ACD Chris Addenbrooke had his directorship revoked on February 11.

At the end of 2021 the FCA’s chief executive, Nikhil Rathi, assured the Treasury Select Committee that its investigation of the Woodford collapse was over but it couldn’t be published until the regulator’s legal team had analysed findings and decided what, if any, action to take.

What has been disclosed so far is precisely zero, which makes Sue Gray’s redacted report on Downing Street socials look revelatory.

Addenbrooke’s departure comes at a time when Link’s culpability in the affair and responsibility for badly managed asset disposals is still unknown.

Lawyers Leigh Day are seeking multi-million compensation from Link for the millions of savers caught up in the collapse.

The FCA failure to publish and be damned does a disservice not just to savers but to institutions and officials living under the shadow of disciplinary action.

Champagne? Who needs it.

The effervescence of Nyetimber, England’s answer to Moet, is a Brexit story to savour.

The bone-dry bubbly achieved record production and sales last year, up 55 per cent, with exports to Europe, rising a dazzling 89 per cent.

No need to worry about border controls. If the EU makes life difficult it is worth noting that China has developed a taste for a sparkler which was enthusiastically quaffed by G7 heads of government at last year’s Cornwall summit.