ALEX BRUMMER: War in Ukraine is an immense challenge to world output


Fragile base for prosperity: The war on Ukraine is an immense challenge to world output, says ALEX BRUMMER

Global events will make decision-making for the Bank of England and other central banks much harder in the coming months.

It was thought the main challenge would be navigating respective economies out of the pandemic into the sunny uplands of recovery, gently returning inflation towards a 2 per cent target.

War on Ukraine has changed that. It is easy to dismiss Russia and Ukraine as bit players in international output. 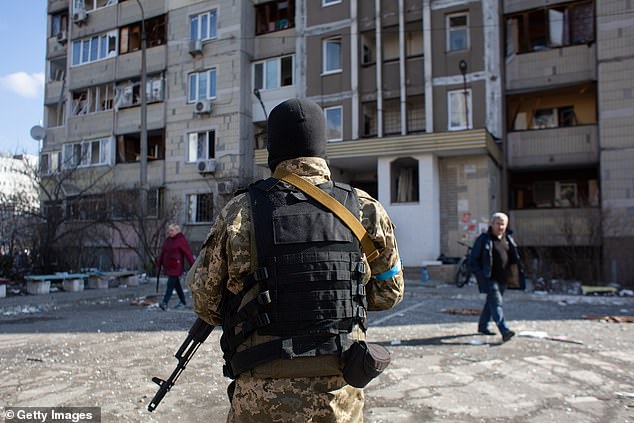 Conflict: A Ukrainian soldier guards a residential building in Kyiv. There are already signs that the impact of sanctions on financial stability could be rougher than anticipated

That would be misplaced. There are already signs that the impact of sanctions on financial stability could be rougher than anticipated.

Austria’s Raiffeisen Bank is considering an exit, potentially cutting off 4.2m customers, 9,400 staff and putting one-third of all its profits at risk.

The bank’s share price has plummeted 50 per cent since the conflict erupted and fell a further 5 per cent in latest trading.

As we know from the great financial crisis, there is a strong relationship between the equity value of banks and confidence in their solvency.

The humanitarian impact of the war is only too evident in the shape of 3m refugees which is proving a serious challenge for contiguous nations, the EU as a whole and Britain.

The contribution of the natural resources of Russia and Ukraine to global supply chains and prices cannot be underestimated.

Russia supplies 16 per cent of the world’s natural gas and 11 per cent of its oil. Together, Russia and Ukraine account for one-third of all the world’s wheat exports, and are critical producers of fertilizer and metals valuable to industry, including palladium and nickel.

The conflict in the region is an immense challenge to world output.

Amid the devastation to Ukraine, a powerful earthquake of Japan’s north-east coast barely registered in the headlines.

It has led to death and mayhem, shut down factories making advanced components for smartphones, electronics and motor vehicles in Japan itself and across the oceans.

As if this were not enough uncertainty, China, an engine of global output, is having a financial breakdown.

Some $2trillion has been wiped of the market values of Chinese stocks since the start of the year. In Hong Kong the Hang Seng has retreated to levels not seen since 2008.

All this leaves central banks making decisions in the dark. The Bank of England has become more dovish in its tone, in spite of the inflation spike having effected three interest rate in a row. In contrast, the previously reluctant-to-act Federal Reserve is signalling that after this week’s rise by a quarter of a percentage point, rates could eventually go to 3 per cent.

This is not quite a Volcker moment, as some analysts have called it, but nevertheless a big change.

The European Central Bank, close to the heart of events in Ukraine, is taking a step back from raising rates. Its president Christine Lagarde says now that it has speeded up the exit from money printing, it has ‘extra space’ before lifting interest rates.

But with inflation pushing towards double digits in the UK and elsewhere before the end of the year central bankers will be hard pushed to hold their nerve even if global production splutters.

You have to admire the resilience of movie house supremo Mooky Greidinger. Faced with a grim warning in Cineworld accounts over ‘material uncertainty’ about the group’s ability to pay down a debt mountain of £3.9billion there is breezy optimism.

Higher money costs are not a worry because most of the borrowing was taken on at low pre-pandemic rates.

Revenues are on the way up due to blockbusters such as Spider-Man: No Way Home. And Greidinger wants to continue investing in upgrading his cinemas to improve the going-out experience.

It is all a bit of a wing and a prayer. Hopes of seeing this through could depend on escaping the potential £681million hit in the Canadian courts from the company’s decision to pull out of a £1.6billion bid for the country’s Cineplex chain.

Having defied the odds so far who would bet against?

As Boris Johnson puts the finishing touches to Britain’s energy security strategy, there is a shard of light from the East Riding.

The planning committee in Yorkshire’s East Riding has given the green light to Reabold Resources to drill for oil at sites in West Newton.

The 23 per cent jump in the AIM-listed company’s shares shows how UK hydro-carbons still have a future.