ALEX BRUMMER: Lessons of Western unity in confronting Moscow will not have been lost on leader as comfortable with globalisation and open markets as China’s President Xi

During the weeks before Russia’s assault on Ukraine, Vladimir Putin and China’s supreme leader Xi Jinping were photographed in harmony at the Winter Olympics after signing a deal to build a gas connector between their countries.

Russia would supply 10billion cubic metres of gas per year to help China meet the vast energy needs of its industrial machine.

When Russia turned its guns on the Ukraine, it was assumed that China, like its smaller economic partner, would be happy to see Putin take his revenge on a decadent West, which failed to confront President Assad in Syria and left Afghanistan amid disarray. 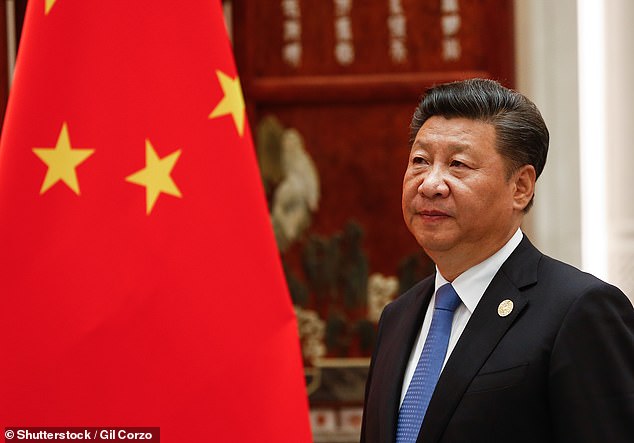 Flag day: China has been counting upon the West’s disunity and lack of backbone, but President Xi will have seen how countries have reacted to Russia’s invasion of Ukraine

If Putin’s formidable military could reclaim Ukraine for a new Russian empire, who in the world would be able to stop Taiwan from being reunited with the mainland.

The confidence of Xi was high after its incursion of Taiwan airspace in January when 390 missions were recorded.

China had already subdued freedoms in Hong Kong without firing many bullets. If Russia could rapidly succeed in Ukraine, it could have been the green light for Beijing to add Taiwan’s fast-growing tech economy to its own purring industrial machine.

China has been counting upon the West’s disunity and lack of backbone. Sure, so far, Nato has declined to provide the air cover requested so often by Ukraine’s President Zelensky. But the West has delivered in geo-political, business and financial terms with a punch, which could never have been imagined.

Germany has gone to the barricades with an increased defence budget and turned its energy policy, which made it so dependent on Russia, on its head. One by one the assets of the oligarchs, including Roman Abramovich, are being seized.

Companies from McDonald’s to Britain’s tobacco group Imperial Brands have scuttled their Russian operations. Russia has been frozen out of the global financial payments and banking system, killing its access to Western money. Goldman Sachs and JPMorgan are among lenders heading for the exit.

The unity of purpose by Western nations and corporations will have been heeded in Beijing. Admittedly it may look easy to squash the sub-size Russian economy. China, the world’s second largest, might seem far harder to tame.

As one Hong Kong banker told me, China will not like what it is seeing. China’s rise to become the world’s second largest economy has been fostered by its embrace of the global trading system. It has also created an enormous interdependence with the West.

To some extent, China is already engaging in self-sanctioning. Chinese businesses are increasingly reluctant to deal with Russia for fear that they will be punished by Western consumers and regulators in more important markets.

Much is made of the fact that China and Russia share a border and this has obvious trade advantages. What that fails to recognise is that the engine room of Russia’s economy is thousands of miles away west of the Urals, while Beijing’s wealth is concentrated on its east coast.

For most consumers in the West, it is hard to imagine a world without Chinese goods. The HP laptop on my desk is loaded with Western tech but assembled in China, along with my Casio calculator, office chair and the gym clothes I wore this morning.

China’s success means it has built up a huge war chest of financial reserves. The larger part of this $3trillion war chest is tied in US Treasuries (American bonds) which means if push came to shove Washington could freeze them at the stroke of a pen.

Indeed, the global investments it has built up from ports in West Africa to Greene King beer in Britain (China has an estimated £143billion of investment in the UK) could be frozen as easily as Chelsea Football Club.

China is a communist country but its instincts are capitalist. It delights in share trading, gambling in Macau, real estate investment and innovative forms of digital banking such as Ant Financial. Aside from the strategic difficulties of overcoming Taiwan’s mountainous geography, it would be very reluctant to put its own brand of freewheeling capitalism at risk.

The lessons of Western unity in confronting Moscow will not have been lost on a leader as comfortable with globalisation and open markets as President Xi.