SIMON LAMBERT: Sunak’s help and National Insurance cut will barely ease the cost of living pain but the OBR’s stark charts show how hard that is

By Simon Lambert for Thisismoney.co.uk

Was that enough? When Rishi Sunak stood up to deliver his Spring Statement yesterday lunchtime, the nation awaited news on what he would do to help with the cost of living crisis.

A measure of that big squeeze came just a few hours earlier when the ONS revealed CPI inflation had hit 6.2 per cent.

That’s the highest it’s been for 30 years, meaning that Sunak faced a challenge chancellors haven’t seen for three decades: how to placate a nation whose bills are rising this fast? 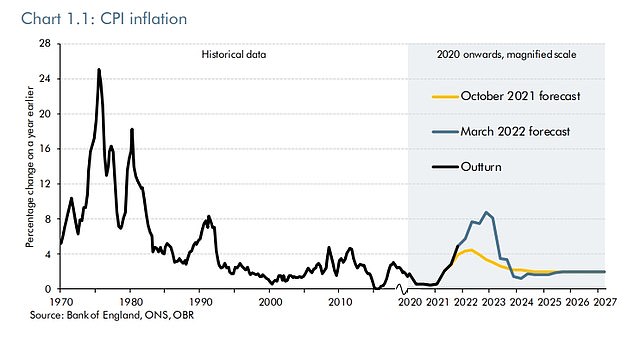 Back to the 90s: Inflation is now as high as it has been since 1991 and is forecast to keep rising, this OBR chart shows

Inflation is expected to keep climbing, with the Office of Budget Responsibility forecasting a peak of 8.7 per cent this winter, hot on the heels of the Bank of England suggesting 8 per cent in June ‘and perhaps even higher later this year’ as it raised interest rates last week.

The inflation being felt right now and the even bigger squeeze to come is acute because a big chunk is coming from essentials: our household bills, the cost of filling up a car, and the cost of a shop.

This is being felt even by those higher up the income scale, but the most painful effect of high essential-spending inflation is suffered by those who earn less and have less disposable income after bills are paid.

Meanwhile, just as the cost of living pain is intensifying, Britain is due a tax hike – with National Insurance set to rise by 1.25 percentage points from April.

A call for the NI hike to be scrapped was among the many sounded before the Spring Statement, alongside demands for more help on energy bills, a big cut to fuel duty to combat soaring petrol prices, the raising of benefit payments to match inflation and some money for pensioners feeling royally diddled by last autumn’s temporary abandonment of the triple lock.

Set against all that, came the knowledge that any help offered by Sunak was likely to be targeted as much as possible at lower earners.

The dead certain 5p fuel duty cut will benefit all who drive – and probably the rich filling up their SUVs even more than poorer employees struggling to work in and old Fiesta.

There is also the not so small matter of the coronavirus pandemic bill to pay at some point, so even with the economy and tax take doing better than thought there was unlikely to be funds to help those further up the earnings scale.

In the end, Sunak failed to spike the National Insurance hike but did temper its effect, by raising the NI lower threshold by a huge amount from £9,568 to £12,570 from July – putting it in line with the point at which people start paying income tax.

This alignment makes perfect sense and manages to help the low paid and shave a bit off the bigger NI bills triggered by the April hike for higher earners too. 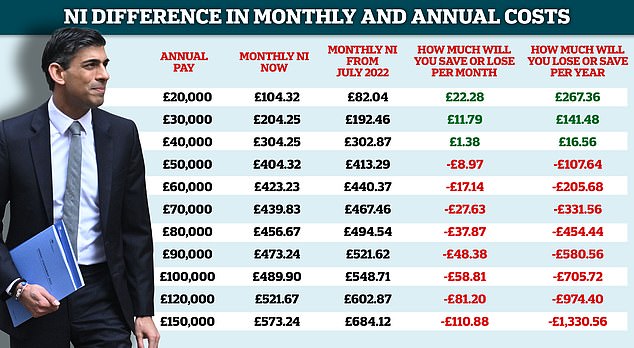 A hike and a cut: National Insurance will still rise but the threshold it is paid at will dampen the effect and save some people money

Further down the line, the Chancellor promised to cut the basic rate of income tax to 19p before the end of the Parliament. It’s an odd move to raise one income-related tax in the form of NI but promise to cut another, but Rishi is desperate to be known as a tax-cutting Chancellor it seems.

There was also more energy bills help for those on lower incomes but nothing dramatic and the promise of some money off energy saving home measures with a VAT cut. Perfect if your idea of combatting a cost of living squeeze is splashing out five grand on solar panels but maybe not that useful for everyone.

So, to go back to my original question, was that enough?

Probably not, but then it was unlikely Sunak was going to be able to ever make much of a dent in this painful bout of inflation. 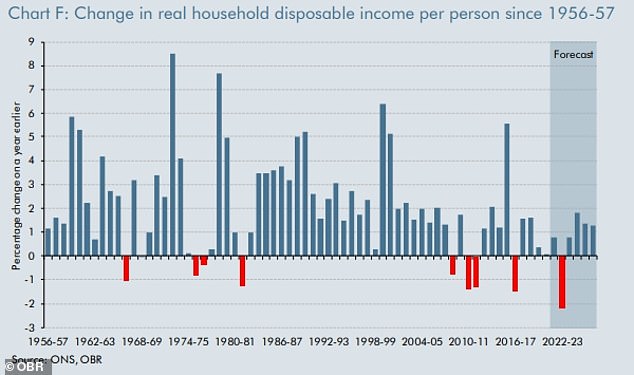 Predictions: Real household disposable income will see living standards drop by the worst level since the 1950s, the OBR said, shown by the red bars 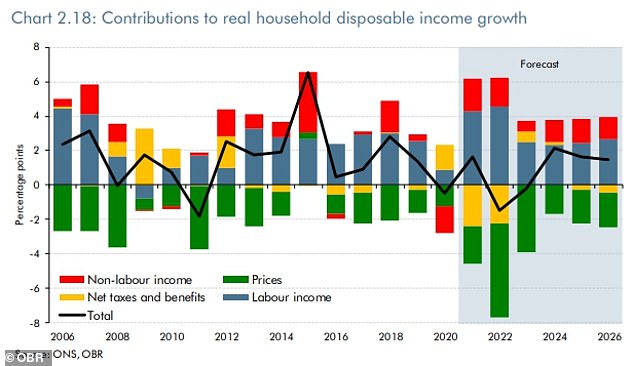 That would require largesse we know he is capable of, having cooked up the furlough scheme to cover a big chunk of the nation’s wages in the pandemic, but the Chancellor can’t keep borrowing to pay our bills for ever.

The stark reality of that was laid out in the OBR charts showing households face the biggest drop in living standards since records began in 1956, as inflation wreaks havoc on our disposable income.

This is not quite the Roaring Twenties boom we were hoping for this time last year.

Let’s hope that’s just been delayed and not cancelled.