As critics call for safeguards on deal, Inmarsat bidder says: Trust us


The boss of the US group buying Inmarsat has promised it is committed for the long haul and has no plans to sell off parts of the satellite company’s business.

Launching a robust defence of the £5.4billion takeover, Viasat chief executive Rick Baldridge told the Daily Mail that his firm intends to create a slew of new UK jobs and invest more in Britain.

But critics said assurances must be ‘cast iron’ and legally binding after many disastrous UK buyouts. 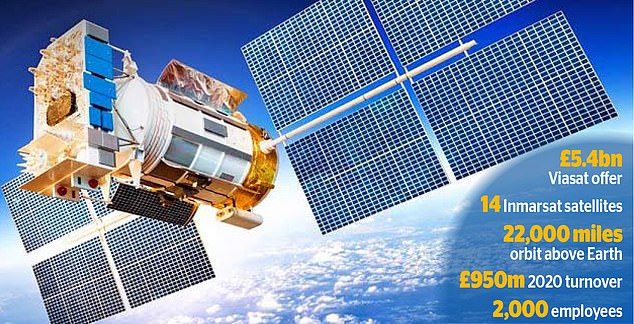 The takeover is one in a line of controversial aerospace and defence deals in recent years.

There are fears Inmarsat could suffer the same fate as aerospace group Cobham, which was carved up 18 months after it was bought by US private equity firm Advent.

The Government has been so worried about the string of sell-offs it has brought in laws to protect firms in sensitive industries – including space – which include automatically screening deals.

Inmarsat is the largest provider of in-flight wi-fi for airlines and the top provider of internet connections for ships. It has 14 satellites in orbit and plans to launch another seven. Baldridge said: ‘We’ve got a good history of making acquisitions an integral part of the company.’

He added that Viasat could sell some of Inmarsat’s US operations if they do not fit into the future, but added that the company has been around for 35 years and not sold anything to date.

Viasat invested £300m in a cyber centre in Aldershot, Hampshire, last year, and does other work in the UK.

He added: ‘We’ve already been making hundreds of millions of dollars in commitment here.

‘So, you don’t have to believe me and say, ‘What are you going to do with this? Is this going to be the latest promise?’ Look at what we’ve done.’ But aerospace analyst Francis Tusa said any promises would need to be cast-iron, multi-year legal commitments to ensure that Inmarsat avoids Cobham’s fate.

Tusa said: ‘Assurances are not enough on their own. They need to check Viasat’s not crossing its fingers behind its back – with too many takeovers we’ve seen promises that were comical.’

Inmarsat was taken private in 2019 for £4.7billion by private equity groups including Warburg Pincus, but was put up for sale last year.

Most of its 2,000-strong workforce is based in the UK.