ASK TONY: Canaries holiday hotel turned out to be on different island!


I booked an all-inclusive package holiday for my partner and me with Expedia for Christmas in the Canary Islands.

Our flight took us to Tenerife, but a taxi driver told us the hotel was on Fuerteventura. I phoned Expedia and was bounced around four departments.

I asked it to cancel our hotel on Fuerteventura and book one on Tenerife. We were told to stay put and someone would contact us in 24 hours. We didn’t fancy spending 24 hours in an airport, so I found a comparable hotel nearby. 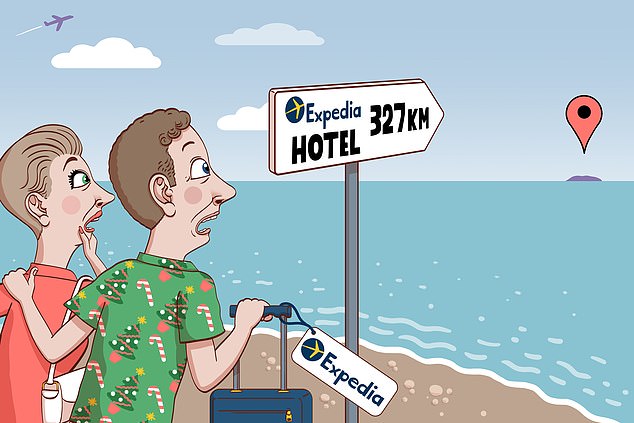 Flight mix-up: A couple’s holiday in the Canaries quickly turned into a nightmare when it emerged the hotel was on a different Island  to their arrival airport

A day later, Expedia emailed to say that unless I checked into the hotel on the other island, I would not receive a refund but it offered no assistance in getting there.

Fuerteventura is 12 hours by ferry or two hours via a daily flight. When I questioned this I was told I should have checked where I was going. We paid £1,630 for the original hotel and then a further £2,374.69 for the new hotel.

Tony Hazell replies: I don’t think anyone booking a package holiday would expect to have to check they are being flown to the right destination. That’s what the travel agent is being paid to do. Mind you, if we book ourselves we must own up to our mistakes.

On a driving tour of Germany I reserved a marvellous little hotel at Freiberg. Unfortunately, we were heading for Freiburg im Breisgau in the south west, while this one was in Saxony. My error was exposed when the satnav showed a seven-hour journey, rather than the two hours we had been expecting.

Mrs H took over the bookings for the rest of the holiday, though booking.com and the hotel owner were both very helpful.

When I tackled Expedia about your holiday mess, it was very apologetic. A spokesman says: ‘At Expedia, a positive customer experience is our main priority, so it is disheartening to hear there was misleading information on the flight package which led to this experience.’

I am surviving on the basic state pension. In November 2021 I rang my energy provider, Eon-Next, and was advised to claim the £140 Warm Home Discount.

Since then I have rang Eon-Next nearly every day and I have sent several emails. There is never an answer, they don’t reply.

Why I still am waiting for my money?

I desperately need this money as I cannot afford to eat and heat my home. I am a retired mental health worker and have worked for more than 50 years.

Tony Hazell replies: The Warm Home Discount is a £140 credit to your energy bill.

It is available to those receiving the guarantee element of the pension credit and to some on low incomes who receive certain means tested benefits.

It is normally applied to the bill but those who, like you, have prepayment meters receive a top-up voucher.

Those with such meters need immediate help because they are paying for their energy now and at the inflated prices energy companies are allowed to slap on to pre-payment meters.

Then things went crazy as you began receiving emails addressed to ‘Ms Jane’. Your name is not Jane.

The emails were in some cases were barely literate.

Still your money did not appear though you did receive a new key with £20 credit as apology.

I chased again… and again. Finally someone phoned you and once you had provided some documents E.ON needed it sent your voucher which you immediately used to top up your credit.

An E.ON spokesman says: ‘Under the rules of the warm home discount scheme, suppliers are required to verify whether customers are actually in receipt of the benefits they stated when completing their application.

‘We make customers aware when they apply that there is a chance we’ll ask them to provide us with proof of their benefits. This process can take some time and in this case, was the cause of the delay to payment. We have apologised for any confusion and the time this matter has taken.’

To its credit E.ON is still accepting warm home discount applications for winter 21/22. Some companies including British Gas, Utility Warehouse, Shell Energy and M&S Energy are not.

I look after the tax affairs of my daughter and other partners in our business. In 2020 I paid tax for her and two others from a Smile savings account.

Unbeknown to me, the unique taxpayer reference numbers are not passed on from this account.

As a result, HMRC did not know where to credit the money, so it was put into a suspense account.

I have been in contact with HMRC and it has allocated two of three partners’ payments to their tax accounts.

However, my daughter’s payment of £872.55 still has not been allocated. HMRC believes she is in arrears and is charging interest. None of her letters have been answered.

Tony Hazell replies: HMRC tells me: ‘It is very rare that a customer’s UTR number does not come through from their bank and we make every effort to trace payments and contact banks when this does happen.’

However, this is definitely worth checking if you are sending money from a savings account rather than a current account.

HMRC has contacted your daughter to confirm that the payment has been allocated to her records. It apologises for the delay.