ASK TONY: It took a full month to move my Isa then £1k disappeared!

When I transferred my Isa from Scottish Friendly to Vanguard in September, I was told it would take up to 30 days (which I find mind-boggling).

It has since asked me to submit another transfer request for the missing money, as Scottish Friendly insists both payments were made. 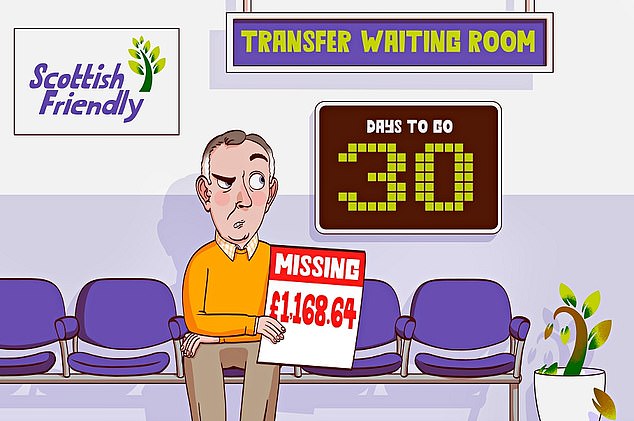 Vanishing cash: A Scottish Friendly customer found his balance was £1,169short after an agonisingly long wait to move his money ISA

Tony Hazell replies: Investment transfers can, as you say, take a mind-boggling amount of time.

I have personal experience of this and there really is no explanation other than a lack of will by the investment industry to improve the situation for its clients.

In your case, there were actually three accounts involved.

Vanguard says the details on the transfer form only referenced one, so it was obliged to return payments associated with the other two — one for £1,168.64 and another for £154.72.

Scottish Friendly then failed to identify that the returned money related to your Isa, so it told you and Vanguard that the transfers had been successfully completed.

It has now sent an updated version of the Isa transfer history form and all the money has been received by Vanguard. Scottish Friendly says: ‘We are extremely sorry this error occurred and apologise for the inconvenience this has caused Mr M.’

It is also paying you £250 compensation. Vanguard and Scottish Friendly will also look at whether you have suffered any financial detriment owing to the delayed transfer and the difference will be made good.

How can I be charged £45 for phone data if I didn’t touch my phone?

I work as airline cabin crew. My Three Mobile package gives me 12GB of data per month.

I recently flew to the Bahamas and believed that I had turned off data roaming and put the phone in airplane mode. After being caught out several years ago, I am fastidious about it.

I have also previously asked for a cap on all charges. Upon arriving at the hotel and connecting to wifi, I received numerous texts saying I’d incurred data charges of £45.06.

How can my phone use all that data when I haven’t even touched it?

Tony Hazell replies: You believed you had turned data roaming off, so what happened? Beware, because some phones will switch to local 4G or 5G if they decide the wifi is too weak.

It should not operate if data roaming is switched off but to be safe, I would also turn off ‘wifi assist’.

Many Three packages feature Go Roam, which allows you to use your data from your package when in certain countries.

However, the Bahamas is not part of Go Roam. Any data used costs an eye-watering £6 per megabyte — Three blames local networks.

One megabyte is about a page of data or two minutes of music.

Three says it doesn’t have a record of a spending cap on your account but limits do not apply if you are in a destination that is not covered by Go Roam.

It adds that its records show you used data for a short period on December 1.

Perhaps you turned off data roaming very shortly after arrival and your phone had already started downloading emails? However, I pointed out some of your personal circumstances to Three.

When you were furloughed, you worked long hours with the NHS vaccination programme.

Now you are back flying, you still help at the vaccination centre on your days off.

Three, which has applied credits to your accounts on three previous occasions, has agreed to do it again.

Perhaps you should check at a local shop to be absolutely sure you are shutting your phone down.

A Three spokesman says: ‘When it comes to roaming charges, we aim to be as transparent. Details of all our costs are on our website.

‘We do alert and advise customers in locations not covered by Go Roam to ensure data roaming is disabled.’

Frozen out over freezer insurance

I have had my freezer insured with Domestic & General for many years.

It stopped working on December 22 and was confirmed as irreparable on December 30 by the firm’s engineer. I was offered a ‘free’ replacement — but for me to get this, the firm is asking that I pay a further year’s premium of £149.88.

The policy was fully paid up to January 1, 2022, so I cannot see the reasoning behind this. I lodged a complaint but the promised call back did not come.

I have just spent more than two hours on the phone, waiting to be connected to the resolutions department. I am without a working freezer.

Tony Hazell replies: Domestic & General confirms that you were given an online replacement link for the freezer, which incorrectly displayed a fee of £149.88.

Domestic & General apologises, adding: ‘We have determined that this was unfortunately owing to a combination of system and human error at a very busy time of year.

‘We have taken note of the details of the case so as to prevent this happening again.’

Your new freezer was installed without charge on January 18.