Astrazeneca hiked its dividend for the first time in a decade after raking in record sales.

Revenues at the pharma giant rose 41 per cent to £27.5billion last year, boosted by nearly £3billion in sales from its Covid-19 vaccine.

Takings from the Vaxzevria jab, however, were much lower than US rival Pfizer, which made around £27billion from its own Covid-19 vaccine in 2021. 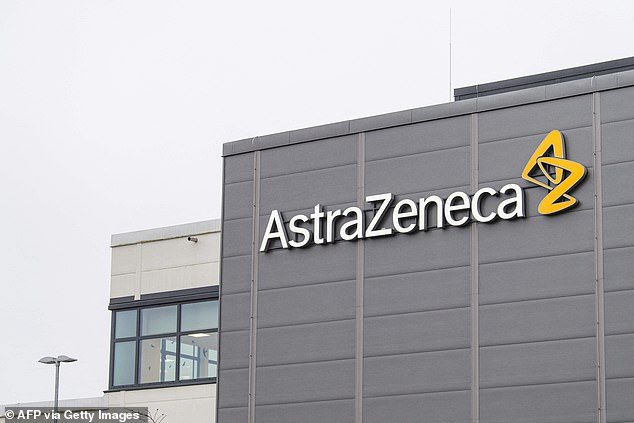 Dividend boost: Revenues at Astrazeneca rose 41|% to £27.5bn last year, boosted by nearly £3bn in sales from its Covid-19 vaccine

As the pandemic swept the globe, AstraZeneca said it would manufacture and sell the jab it created with the University of Oxford on a non-profit basis.

The move won plaudits around the world but limited its potential as a lucrative money-spinner.

AstraZeneca and its partners have distributed around 2.6billion doses of the jab to over 180 countries across the globe, most of which have been shipped to low and middle-income nations.

However, the firm’s sales were boosted during the year by blockbuster medicines including its Tagrisso, Lynparza and Calquence cancer drugs, its diabetes treatment Farxiga and asthma medicine Fasenra.

Tagrisso generated over £3.7billion in revenue for 2021, while Farxiga raked in over £2.2billion and Lynparza over £1.5billion.

The firm also received 22 regulatory approvals for its drugs during the year, as well as 14 positive clinical trial results across nine medicines.

As a result of the growth, AstraZeneca planned to hike its annual dividend by around $0.10 to $2.90 per share, the first time it has raised the payout in ten years.

The increase will raise the total dividend to around £3.3billion from £3.2billion previously.

However, the increased sales failed to offset a surge in costs and the company swung to a £194million loss during the year from a £2.9billion profit in 2020.

Such an increase will take Astra above £29billion in annual revenues, hitting a target set by boss Pascal Soriot in 2014 after the group fought off a takeover swoop by Pfizer.

The latest sales surge means the group will also hit the target a year earlier than planned.

‘We are confident in our long term growth and profitability,’ said Soriot, who has seen the share price triple during his almost ten years in charge.