They duly rewarded shareholders for their loyalty with the promise of dividend payments in the coming weeks.

For investors in these banks – Barclays, HSBC, Lloyds and NatWest – it was nothing but good news, although the party was soon spoilt as Russia’s march into Ukraine sent the banks’ shares on a downward trajectory.

But loyal savers – many of them elderly and heavily dependent on branches to do their banking – greeted their bank’s results with nothing but a sense of injustice and a seething anger. 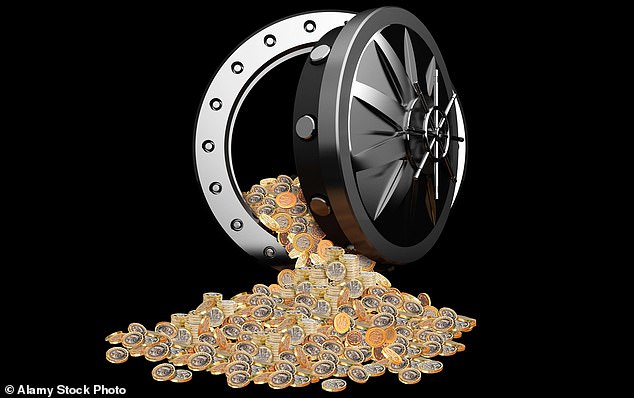 In safe hands?: Loyal savers greeted their bank’s results with nothing but a sense of injustice and a seething anger

In the race by the banks to restore their profits post-pandemic, beef up their balance sheets and keep shareholders sweet, savers have been forgotten – or ‘shafted’ as one reader bluntly put it in an email to me last week after Barclays had posted 2021 profits in excess of £8billion.

Despite two hikes in the Bank of England base rate since mid-December last year – first from 0.1 per cent to 0.25 per cent on December 16, and then to 0.5 per cent on the third of this month – most savers with the country’s leading banks have seen little by way of extra interest.

To put it in the same language as the aforementioned reader, their savings – their precious savings – are rotting, undermined by inflation which is currently at 5.5 per cent and racing towards seven per cent at a frightening rate of knots.

It’s enough to make you wonder, is this the most brazen bank robbery ever?

Yes, these savers could move their money, but many of them have no wish to transfer their savings to a brand they know little about. Some don’t want an internet-only savings account.

Maybe it’s an age thing, but they trust their bank to do right by them (my mum, for example, swears blind that her bank NatWest can do no wrong). It’s a trust that is being exploited by the banks.

In the wake of the first base rate increase in December, The Mail on Sunday called on the banks to Give Savers A Rate Rise.

Yet the banks, more interested in profits and axeing branches like foresters on steroids, have refused to heed our cry.

Only a handful of building societies and Government savings bank NS&I have passed on near comparable increases in interest rates to their savers.

Last week, Savings Champion, the country’s leading rate scrutineer, sent over a list of savings institutions that have increased rates on at least one type of variable interest-paying account since December 16 last year.

Only 47 out of 158 providers have increased rates, but not on their full range of variable accounts and not by the full 0.35 percentage increase in base rate.

The notable exception is Swansea Building Society. From Tuesday, it will have increased rates across its entire range of savings accounts – including accounts no longer available – by 0.35 percentage points.

It means that the new savings rate on its Instant Access and Cash Isa accounts will be 0.75 per cent and 0.8 per cent respectively. On a savings balance of £10,000, it means respective annual interest of £7.50 and £8, compared to the £1 of interest being paid by the likes of NatWest and Lloyds on equivalent accounts (see below).

Savings Champion says a majority of providers – 111 out of 158 – have failed to do anything other than sit on their hands for 73 days and rub their corporate hands together in glee. Ching, ching, more profits.

They include some names you wouldn’t necessarily expect. For example, Marcus, Goldman Sachs’ account launched in 2018 to disrupt the savings market (it still pays a competitive 0.6 per cent interest).

Among the 111 are Santander and top four banks Lloyds and NatWest – both rescued by taxpayers in the 2008 financial crisis.

Eight days ago, Lloyds launched its new Drumbeat TV campaign featuring horses galloping through the suburbs. Its director of marketing communications was moved to proclaim: ‘Our new Drumbeat advert brings our iconic black horse into the heart of daily life, demonstrating our timeless commitment to families, businesses, and communities across Britain.’

I’m sure many of Lloyds’ savers have already watched the sugarcoated advert and questioned the bank’s timeless commitment to them.

A close friend who saw the advert and who normally doesn’t comment on matters of personal finance summed up the advert rather nicely: ‘Aesthetically pleasing fiction dressed up as fact.’

The banks’ refusal to give many savers a rate rise after nearly 13 years of base rate being under one per cent is described as ‘disgraceful’ by Savings Champion’s cofounder Anna Bowes.

It also angers Baroness Ros Altmann, a champion for the elderly. She says: ‘The banks are making huge profits – and it is the ordinary saver who is paying a heavy price for this profit recovery as banks increase the margin between the interest rate they lend at and the rate they are prepared to pay savers.’

Altmann believes savers are still being punished as a result of the cheap money that the banks received from the Bank of England in the wake of the 2008 financial crisis to enable them to support businesses with loans and avert an economic meltdown. This was called quantitative easing.

She adds: ‘The banks have received so much new money from quantitative easing that they have not needed savers’ funds.

‘After so many years of suffering, any hope that savers would finally see their thrift rewarded on the back of rising interest rates has been dashed.

‘The meagre interest rate rises have lagged way behind soaring inflation, so savers are losing money month after month in real terms.

‘It would be a welcome change to see the banks rewarding their loyal customers with much better savings rates as their profits increase, but I see no evidence that this is going to happen.’

Dennis Reed is director of over60s campaign group Silver Voices. He is scathing in his criticism of the banks.

He says: ‘The obscene profits announced by the big banks in the last few days disgusts senior citizens like me who are being squeezed from all directions by the unprecedented cost of living crisis.’

He adds: ‘Many pensioners are reliant on the interest they get from their savings to top up their state pension so they can afford everyday essentials. Yet they now have to watch these savings go down the plughole as inflation surges and the interest rates they receive are worse than pitiful.’

Reed believes the Chancellor of the Exchequer should announce a windfall tax on the big banks and use it to fund an emergency £500-ayear boost to state pensions.

Savings Champion’s Anna Bowes says it ‘beggars belief’ that only 30 per cent of savings organisations have so far disclosed what they intend to do with savings rates in response to the two base rate increases since December last year.

She says: ‘Many people will assume that their banks and building societies will be treating them fairly and passing on at least some of the base rate rise. But that is simply not the case in the majority of cases.’

Of the 4,529 variable rate accounts that Savings Champion monitors – both closed and open to new savers – Bowes says only 1,165 have benefited from a rate increase. Only 45 have had a rate lift in response to both increases in base rate.

Bowes urges savers to shop around for best savings deals, although she accepts that many savers will stay loyal to their banks.

She adds: ‘Now is the time to move your cash. With the cost of living getting more and more expensive, savers need every penny they can get. Don’t reward your bank for bad behaviour.’

Contemptible… the pitiful rates they wouldn’t even try to justify

Savers with money in easy-to-use instant access accounts and tax-friendly cash Isas are suffering the most from parsimonious interest rates.

Some have not enjoyed any benefit from the 0.35 percentage point rise in interest rates AND they are receiving pitiful annual interest of 0.01 per cent.

The Mail on Sunday invited all four banks to comment on their contemptible treatment of these loyal savers – against the backdrop of soaring profits and dividend payments to shareholders.

As you can see, NOT ONE of the banks answered the question as to how such poor rates could be justified in light of their 2021 profits.