Every pound you have saved with the big banks is no longer safe.

Inflation is attacking the nation’s savings and the pitiful interest rates paid by most household names are doing next to nothing to protect them.

Most major banks still pay no more than an insulting 0.01 per cent on hard-earned savings. 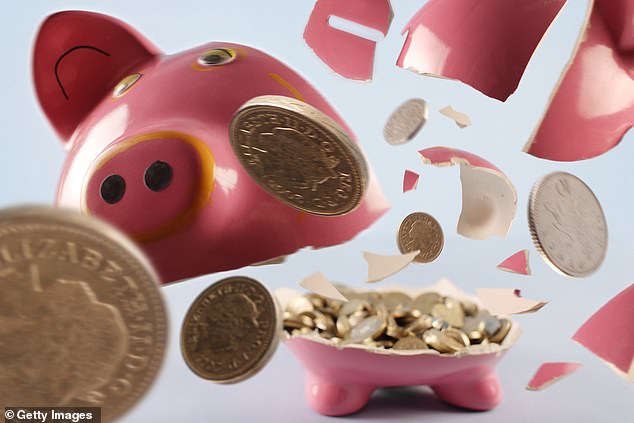 Losing value: Inflation is attacking the nation’s savings and the pitiful interest rates paid by most household names are doing next to nothing to protect them

But they have now run out of excuses.

The Bank of England has hiked its base rate three times since December. Until then, the rate (which dictates what banks themselves pay and receive) had sat at a record low of 0.1 per cent since the pandemic hit in March 2020.

Yet, since the base rate climbed to 0.75 per cent last week, most of the big banks have simply shrugged their shoulders.

Mortgage rates, of course, are now rising — adding to the painful plethora of tax and bill hikes households are facing this year.

At the time of writing, Barclays, Lloyds, and NatWest are still paying only 0.01 per cent on easy-access accounts. That’s just £1 a year for savings of £10,000.

TSB is offering a decidedly more generous 0.02 per cent, while HSBC and Santander both now pay 0.1 per cent.

Despite the miserly rates on offer, the big banks have an estimated £653.6 billion of our money in their easy-access accounts.

And with most paying 0.01 per cent and inflation about to hit 8 per cent, it means savers who put their faith in these institutions could lose out to the tune of more than £52.2 billion this year alone.

What’s more, any increased interest rates are often available to new customers only — leaving loyal savers’ money to languish. The arrogant High Street giants can no longer be trusted to look after our savings.

A consequence of their indifference will be more savers are lured — and duped — into backing risky or non-existent investments. Doubtless, more will be suckered into taking ‘get-rich-quick’ punts on nonsensical cryptocurrencies.

But the savings market is not as bleak as the big banks make it out to be. Your money could be much better off with one of the new banks or building societies fighting for your custom.

Today’s property market is so red hot that some sellers do not even need to try any more.

As we report, the pandemic property boom has led to a surge in so-called ‘secret sales’, whereby the home never reaches the open market.

It’s a win-win for sellers as they do not have to publish the value of their home or have photographs of their bedrooms plastered all over property websites.

But it means buyers have to become savvier to lock down the home of their dreams. And that might mean employing an agent at an added cost of £1,000.

Yet perhaps the real benefit of the rise of secret sales will be the disappearance of gaudy estate agent ‘for sale’ signs that have long littered our streets.

All eyes will be on Chancellor Rishi Sunak today as he details his Spring Statement before the House of Commons.

He’s under huge pressure to ease the cost-of-living crisis, but he’s not short of options.

Meanwhile, the Government is pocketing more money than ever from inheritance tax, and netted an extra £6billion in stamp duty. And the new National Insurance (NI) hike will provide Rishi with £12billion.

Could there be a clearer illustration of how totally unjustifiable the new NI tax grab is?

Rishi needs to act today. Else he will go down in history as the Chancellor who kicked Britain when it was down.