The top of the savings is continuing to edge higher after challenger Atom Bank and Britain’s oldest and largest Islamic bank, Al Rayan, upped rates.

App-based Atom Bank, which was in the news last year after introducing a four-day working week without cutting its employees pay, upped its easy-access account from 0.65 per cent to 0.75 per cent.

Al Rayan Bank, which was founded in 2004, has also upped some of its fixed rates for the second time in a week. 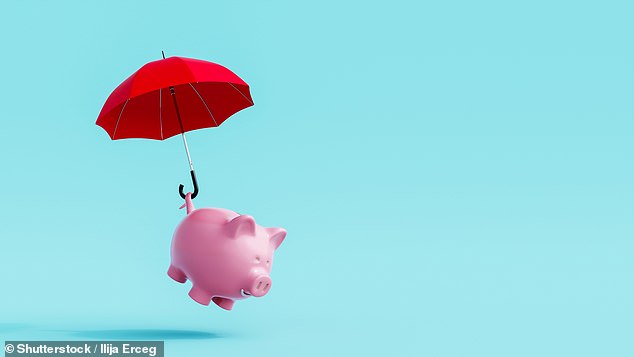 Upward trend: There’s been 22 providers increase rates over the past week and only 3 reduce rates.

The news will be bittersweet for savers after inflation rose to a near 30-year high of 5.5 per cent in January.

Atom Bank’s Instant Saver now tops the easy access market, although it is closely followed by Shawbrook Bank, which upped its rates from 0.67 per cent to 0.72 per cent, and Investec which is currently paying 0.71 per cent.

Savers can open an account with Atom without having to even deposit £1 and can stash away as much as £100,000 into the account.

It allows for unlimited withdrawals and is covered by the Financial Services Compensation Scheme which means savers cash is protected up to £85,000 per individual, or £170,000 in the case of joint accounts.

Someone stashing away £20,000 in Atom’s Instant Saver account could expect a return of £150 after one year if its variable rate remains the same.

With the average easy access rate paying just 0.22 per cent according to Moneyfacts, compared to 0.56 per cent in February 2020, we are still a long way off the rates that were on offer pre-pandemic.

However, on top of the recent base rate rises by the Bank of England, the easy access rate rises today should be deemed another small step in the right direction.

The expectation is that other savings providers will be encouraged to follow suit.

James Blower, head of digital at Moneyfacts, said: ‘I think the news on easy-access rates is very encouraging for savers.

‘We’ve seen RCI Bank also up its rates to 0.7 per cent today, as well as Shawbrook and Atom Bank, to give us four providers above the 0.7 per cent mark and I expect there to be other providers joining them next week.

‘There’s a good chance this sets a new benchmark and that we see the clutch of providers paying 0.6-0.65 per cent respond and join them.’

Savers looking to take advantage of Al Rayan’s fixed rate deals will need to deposit £5,000 to open an account but can thereafter deposit up to a maximum of £1million.

It is also part of the FSCS and therefore savers’ deposits will be protected up to £85,000 per individual.

Someone stashing £20,000 into Al Rayan’s 1.5 per cent one year fixed rate deal could expect to earn £300 in interest over the course of the year.

There have now been more than 300 rate rises recorded across the fixed rate market since 16 December, according to analysis by Savings Champion, and there is expected to be more positive movement over the coming weeks and months at the top of the market.

James adds: ‘We saw 22 providers increase rates over the past week and only three reduce – this is a trend I expect to continue in the coming months.

‘It’s impossible to predict where inflation and base rate is heading but the outlook for savers is improving and moving in the right direction.

‘My advice is that there are better deals coming to market so keep a close eye and switch your money when you see something that appeals, particularly those who are only receiving 0.01 per cent on their savings.’