Santander has increased the interest rate on its easy-access Isa account making it a rare major bank entry in our best buy tables.

It upped the rate from 0.6 to 0.8 per cent making it among the most competitive easy-access Isa deals currently on offer – although it falls well short of the best buy 1.5 per cent non-Isa easy-access rate launched by Chase Bank today.

But it does mean Santander is paying more than twice as much as the typical easy-access cash Isa currently available on the market.

The average deal pays 0.37 per cent, according to Moneyfacts, with most big banks paying 0.1 per cent or less on their tax-free easy-access accounts. 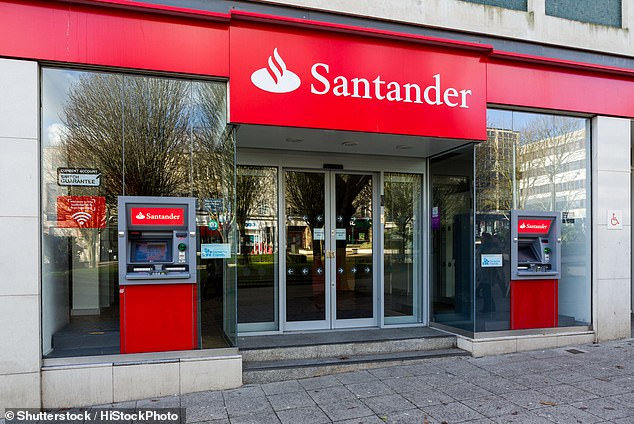 Nudging higher: With eight days before the end of the tax year, Santander is now offering one of most competitive easy-access Isa deals on the market

It also represents a rare appearance by a major bank in This is Money’s independent best buy tables.

However, it’s worth noting that the 0.8 per deal is only available to the bank’s 123 world customers, which includes those with 123 and 123 Lite current accounts.

It is also a bonus account that will convert to a paltry 0.01 per cent after one year, meaning savers will need to move their money once that kicks in.

Those who are not 123 world customers will also be offered an improved rate – albeit at a slightly less tempting 0.7 per cent.

Lloyds Bank and HSBC also offer preferential cash Isa rates to personal banking customers – although they pay nowhere near what Santander is offering.

HSBC’s Loyalty Cash Isa pays 0.25 per cent, whilst Lloyds Bank’s Club Lloyds Variable Isa currently pays between 0.01 and 0.05 per cent – although this is rising to 0.3 per cent from 12 April.

Santander’s e-Isa account can be opened with £500 and enables savers to access their cash at any time.

The 0.8 per cent rate is only 0.05 per cent less than the market leading deal offered by Shawbrook Bank and is joint second with three other providers.

Those who bank with Santander will need to open a new e-Isa to take advantage, unless you’ve opened an e-Isa since 16 March.

With the tax year ending on Tuesday 5 April 2022, many will be looking to add to their Isa before the deadline.

Those saving into a cash Isa will shield any interest they earn from being taxed. They won’t be shielding it from inflation, however, which is now sitting at 6.2 per cent.

Without a cash Isa, any interest earned will only be tax free up to a certain level, due to the personal savings allowance.

This allowance means basic rate taxpaying savers won’t need to pay tax on the first £1,000 of interest they earn.

Higher rate taxpaying savers are afforded protection up to £500. However, additional rate taxpayers have no such allowance.

Both new and existing customers can open an e-Isa account with Santander or transfer the balance of an existing Isa with another provider.

The bank says that customers who opened an e-Isa before 15 March 2022 will not automatically get the increased rate.

Hetal Parmar, head of banking and Savings at Santander UK, said: ‘We’re pleased to have increased rates across a range of accounts recently.

‘Our improved e-Isa offers customers one of the highest cash Isa rates from a high street bank, with an even higher return for our 123 current account customers as a reward for banking with us.’

harrry
Previous articleTaxpayers’ stake in NatWest Group falls below 50% for first time since 2008
Next articlePaul Haarman: 4 Reasons Why Starting a Franchise May Not Be the Best Choice for You…And What to Do Instead