Rise of the ‘blink and you’ll miss it’ savings deals: Challengers pull the plug on top rates fast as they struggle to sustain them in the spotlight

Diligent savers hunting for the best deals may have noticed that some of the top rates have vanished since the start of 2022.

Despite the Bank of England’s base rate rise of 0.15 per cent in December, most savings providers appear both reluctant and unable to pass this on to rate starved savers.

A number of easy-access, Isa and notice accounts as well as fixed-rate deals which were market-leading or in the top 10 have been withdrawn in the last month, according to analysis by Moneyfacts. 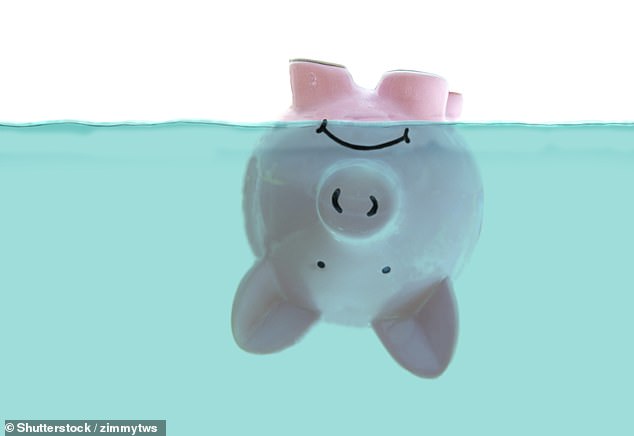 Piggy pain: The average easy-access rate has only nudged from 0.2 to 0.21% since the start of the year

Variable rate deals have been hit hardest by product withdrawals, with savers unable to secure as high an easy-access rate now than they were in January.

The most notable withdrawal was by Family Building Society, which withdrew its market leading 0.72 per cent premium saver easy-access deal within a week of launching it.

Other notable withdrawals include Secure Trust Bank and Charter Savings Bank, which both withdrew their market leading 120 day notice accounts, paying 1.1 per cent and 1.05 per cent respectively.

Rachel Springall, finance expert at Moneyfacts, said: ‘Savers will be disappointed to see some top rate deals vanish from sight, but this movement in the market reiterates how imperative it is for consumers to act quickly to secure a top deal.

‘Challenger banks and building societies continue to offer some of the best returns in the market, but it appears to be quite a challenge for them to sustain those deals in the spotlight.

‘Clearly, there is still some competition in the market, but savers may not have long to grab such lucrative offers and sitting on the fence could see them miss out.’

Although, a number of building societies have upped some of their rates as of this month, many of the major banks continue to pay far less than the 0.25 per cent base rate to savers. Some are still paying just 0.01 per cent.

Anna Bowes, co-founder of the Savings Champion said: ‘As a whole the savings market has been very slow to react to the base rate increase and the best buy tables will generally move in line with the market.

‘It has been really disappointing not to have seen a more competition driving best buy rates a little higher, as that is what savers are hoping for, but the link between the base rate and savings rates has been severed for a long time now, so you can’t depend on savings rates to react – not just on their existing accounts, but best buys too.’

However, there is some cause for optimism among savers.

Some market leading offers were re-introduced, including a 0.71 per cent easy-access deal from Investec and a 0.7 per cent deal from Cynergy Bank, both of which had been withdrawn earlier last month.

The base rate is could rise again on Thursday and may encourage some providers to boost their offerings.

However, for savers who continue to keep their cash with the high street banks, the base rate is unlikely to have any impact.

‘We would really hope to see an increase in the competition between some of the key providers who are looking to raise money from savers,’ says Bowes.

‘But we won’t be expecting to see any of the high street names making their way back into the best buy tables – especially bearing in mind the shocking lack of a reaction seen so far, which means the some savers are still earning as little as 0.01 per cent.

‘Anyone with one of these accounts need to vote with their feet and switch to a provider who will pay them more.’

All of Your Summer Skincare Questions, Answered by a Dermatologist

All of Your Summer Skincare Questions, Answered by a Dermatologist