Beware car cloning ID theft: How it can cost you dear


The flashing blue lights of an unmarked police car burst into the cabin of my SUV just seconds after I’d eased off the motorway and into the service station for a welcome pit stop.

But it wasn’t unexpected, I had an inkling it could and probably would happen.

And for the past few miles I’d been watching the distinctive headlights of the grey BMW through my rear-view mirror —always keeping a steady pace and distance behind. 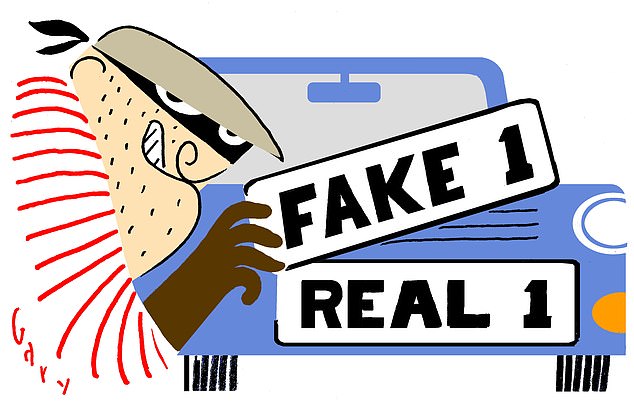 Highway robbery: So-called ‘car-cloning’ is on the increase leaving innocent motorists with parking tickets and speeding fines for which they’re not responsible

So as the car drew alongside next to the Shell filling station, just off the Southbound A1 (M), I wound down the window and looked across at the officer in the passenger seat eyeing me up,

‘South Wales?’ I ventured? He nodded.

Thankfully, I was not the guilty party but an innocent victim. As PCs Dan Stoppard and Gav Pearson of North Yorkshire police were happy to confirm.

The full story began to emerge as we compared notes at Barnsdale Bar South services near Pontefract.

My car had been ‘cloned’ and I was the latest victim of a rising tide of automotive identity theft.

So-called ‘car-cloning’ is on the increase as criminals steal the identities of cars in a variety of scams that leave thousands of innocent motorists with parking tickets and speeding fines for which they’re not responsible.

But in the worst cases, consumers are tricked into unwittingly buying stolen cars — with a false number plate and identity — and left thousands of pounds out of pocket when the vehicle is impounded and returned to its rightful owner.

For me, it all began with a phone call from Nissan while I was in the North-East visiting the firm’s Sunderland plant last week. I’d driven up in a new Qashqai, which had been built there.

‘Had I by any chance been to South Wales as well?’ came the question from Nissan.

The answer was no. And Nissan knew this, but needed to confirm because a near identical blue Nissan Qashqai, with exactly the same (but fake) number plate as mine, had been twice clocked speeding and twice been involved in high-speed pursuits with police in South Wales.

How could that be? 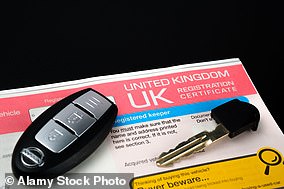 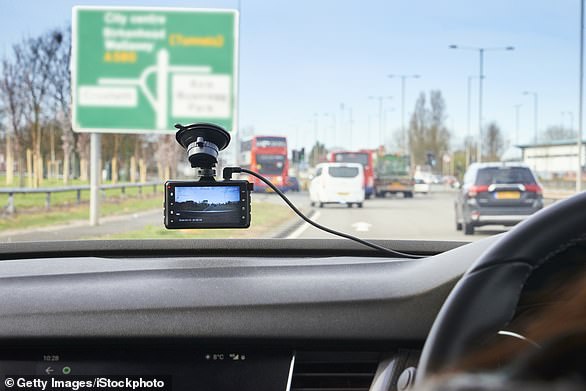 How criminals pick a car to clone

Usually, criminals will wander around car showrooms looking for a model that resembles one they have stolen, and put copies of those legitimate plates on to their stolen example.

But my case was slightly different. My car was part of the Nissan press fleet made available for journalists to road test.

The vehicle had already been extensively photographed with the images appearing in motoring magazines and online.

The suspicion was that a similar-looking car had been stolen and some fake number plates made up matching those of the car I was driving. So the legitimate number plate on my car was now in the police system and would flag up if caught on camera.

In my case, the suspect number plate was spotted on the A1 by an ANPR number-plate recognition camera and flagged as being ‘of interest’. Apparently, a number of police cars were sent in pursuit, but roadworks meant it fell to the unmarked BMW to pull me in.

Police cars themselves have an array of all-round cameras whose digitised images link via computer to the DVLA, insurance and MOT records, highlighting vehicles that may be untaxed, unroadworthy, uninsured or suspected of being used in criminal or anti-social activity.

The two officers who pulled me in said there tended to be an increase in ‘cloning’ in March and September — when the new six-monthly plates come out — as that’s when a lot of number plates are made and often discarded.

To help distinguish my legitimate car from the imposter ‘clone’, the officers made a subtle tweak to my plates which would signal to other police that this was the real deal. 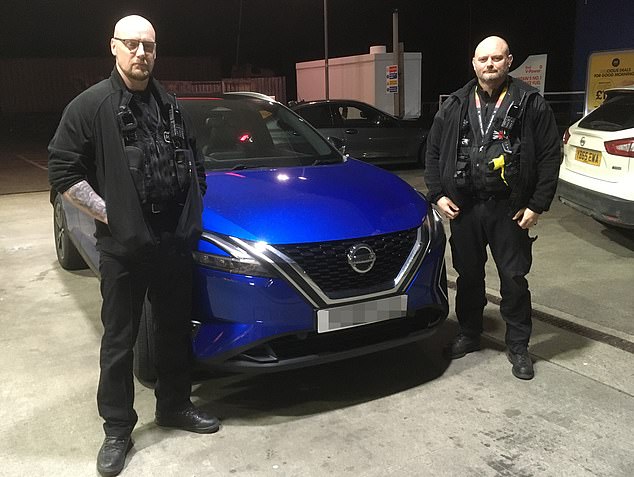 On the case: PCs Gav Pearson (left) and Dan Stoppard (right) of North Yorkshire police with Ray’s blue Nissan Qashqai which was ‘cloned’ in South Wales

Cloning is rising and you could lose a car you bought

Motoring groups say I’m far from alone and that this is a growing problem. The RAC said: ‘Complaints about the trade in cloned registration number plates are on the rise.

It added: ‘Cloning is a very real problem that could not only leave you thousands of pounds out of pocket, but also see you wrongly accused of a serious crime. Criminals either attempt to sell the cloned vehicle or use it to carry out further crimes.

‘If the cloned car is caught breaking the law, or involved in unlawful activity, these offences will often be attributed to the owner of the car that has been cloned.’

And some number plate suppliers are selling plates without verifying the car’s original documents which makes it easier for criminals to get their hands on illegal number plates.

Funnily enough, personalised number plates have a lower chance of being cloned even though they might appear more simple. Keeping photos of your car can help as differences such as dents, scrapes or modifications will distinguish your car from the one committing the crime.

The AA said: ‘Cloning is done either to mask the true identity of a stolen vehicle or, more basically, to avoid parking tickets, speeding fines, congestion charges and the like — the “ticket” would be sent to the keeper of the vehicle from which the identity was stolen.

‘But if you are unfortunate enough to buy a cloned vehicle, then you will lose both the car and any money paid for it, so it’s important to check out carefully any car you’re thinking of buying and to walk away if you suspect anything may be wrong.’

The AA also cautioned to avoid paying cash: ‘Don’t pay less than 70 per cent of the market value of the vehicle. If it’s too good to be true, it may well be.’

The dog is man’s best friend, as the saying goes.

Yet millions of drivers could be breaking the law and putting the life of their favourite pet in peril while driving.

This could even lead to fines of up to £5,000, motoring experts have warned. 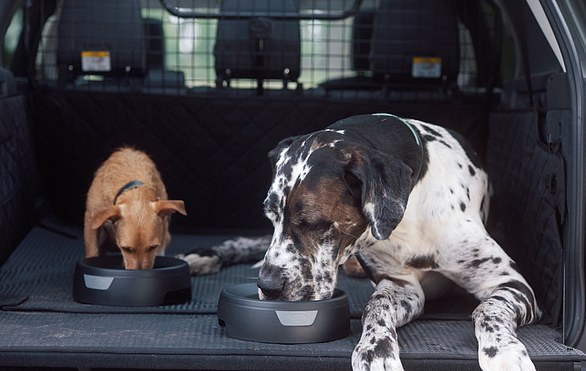 On the loose: Unrestrained pets can be a danger to themselves and the driver

Research by road safety charity IAM RoadSmart reveals that more than four out of ten (42 per cent) of dog owners put their pet in an unsafe place while on the road.

Of this group, more than a third said they left their pet unrestrained in the car: either in the back seat, the passenger seat, the footwell or loose in the boot.

And although 1 in 12 left their dog restrained on the passenger seat — which is legal but not best practice — the report said: ‘This could lead to a pet being killed or badly injured in a collision if the airbag is activated, even at low speeds. 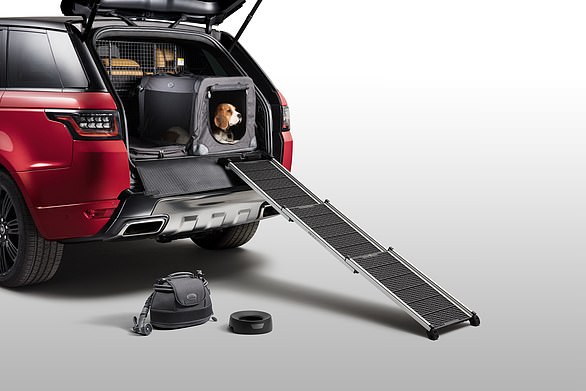 Ruff rider: Research by road safety charity IAM RoadSmart reveals that more than four out of ten of dog owners put their pet in an unsafe place while on the road

‘With around 36 million licence holders in the UK and approximately 12 million dogs, these survey figures represent a huge amount of risk taking on our roads.’

The charity points out that the Highway Code states dogs must be suitably restrained when travelling in a car so they cannot distract the driver or cause injury to either themselves or the motorist.

Also, insurers are unlikely to pay out for an accident in the event of driving without proper control, leaving the motorist with a sizeable repair bill.