Bitcoin falls back below $42,000 as Coinbase boss denies Russian oligarchs are using it to avoid sanctions


Bitcoin has fallen back from two-week highs to below $42,000 amid the market fallout of the Ukraine war, shaking beliefs of its status as a safe haven asset.

The price of the world’s largest digital currency plunged last Thursday from $39,000 to below $35,000 when the news of the Russian invasion broke.

But it rebounded quickly and this week it rose close to $45,000, amid signs Russian oligarchs were scrambling to buy crypto as a way to avoid Western sanctions. 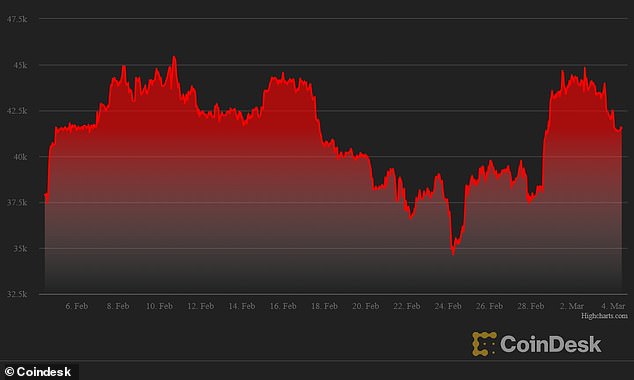 Bitcoin this month: The crypto plunged below $35K last week but is now just below $42

It comes as the boss of crypto exchange Coinbase denied there was a ‘high risk’ of Russian oligarchs using crypto to avoid sanctions.

He reiterated he had no plans of banning all Russians from using the platform, but the company has blocked accounts and transactions from users targeted by sanctions.

In a series of tweets, Brian Armstrong said: ‘Because it is an open ledger, trying to sneak lots of money through crypto would be more traceable than using U.S. dollars cash, art, gold, or other assets.’

He added: ‘We are not preemptively banning all Russians from using Coinbase. We believe everyone deserves access to basic financial services unless the law says otherwise.

‘Some ordinary Russians are using crypto as a lifeline now that their currency has collapsed.

‘Many of them likely oppose what their country is doing, and a ban would hurt them, too. That said, if the US government decides to impose a ban, we will of course follow those laws.’

Binance, another crypto exchange, also said it would not ban all Russians from using its platform, but pledged to take the necessary steps to ensure action is taken against those that have been sanctioned.

The statements follow Ukraine’s request to major crypto exchanges for a complete ban.

The Russian buying frenzy became apparent as trading between Bitcoin and roubles surged by 132 per cent in the days after the invasion, according to data group Kaiko.

Simas Simanauskas of ConnectPay, said: ‘It is likely that we will see increasing use of crypto exchanges and trading to stablecoins if the war in Ukraine continues, rouble keeps on plummeting and the Russian government continues its restrictions on local-to-foreign currency exchange.’

Analysts have also pointed out that the events of the past week were evidence that bitcoin was not a safe haven asset.

‘Bitcoin prices are holding on to their recent gains, but there is little evidence that bulls are serious or fully committed to pushing the BTC price higher,’ said Naeem Aslam, chief market analyst at Ava Trade.

‘In terms of fundamentals, the Russian situation has shaken some beliefs about bitcoin, such as if it is a safe haven asset.’

harrry
Previous articleWhere can I get the best easy-access savings rate?
Next articleEquity release mortgage rates rise, as over-55s urged not to feel pressured by cost of living crisis