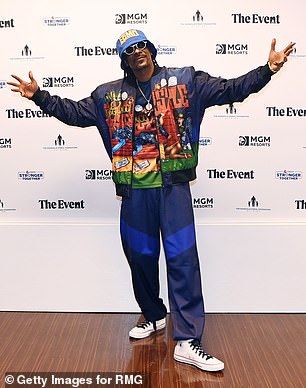 Tobacco giant Imperial Brands has emerged as a potential kingmaker in the battle for control of a medicinal cannabis firm.

The FTSE 100 firm owns nearly 11 per cent of Oxford Cannabinoid Technologies (OCT), which is due to hold a shareholder meeting to decide upon the company’s future.

The vote on April 6 could see its chief executive, chairman and several non-executive directors kicked off the board.

The meeting has been demanded by Gavin Sathianathan, who helped set up OCT in 2017 alongside Neil Mahapatra, one of the non-executive directors he is seeking to oust.

OCT is one of several companies backed by Casa Verde, a venture capital fund co-founded by 50-year-old rapper Snoop Dogg – real name Calvin Broadus Jr – who is a fierce advocate for legalising cannabis use in the US.

Earlier this month, Sathianathan – who owns an 8.1 per cent stake in the company through his vehicle GHS Capital – accused the OCT board of being ‘obstructive and intransigent in the face of ongoing and worsening value destruction.’

He implored it to address what he said were ‘serious governance and sclerotic management issues.’ Sathianathan also wants to appoint three of his own hand-picked directors to overhaul the firm and cut costs. The attempted coup comes after a steep decline in the firm’s share price. OCT has lost more than 70 per cent of its value since it was listed in May last year.

However, his push faces stiff opposition from Imperial, which is understood to have thrown its weight behind OCT’s current board in the run-up to the vote.

Imperial’s corporate development director Richard Hathaway sits on the OCT board and is one of the directors in Sathianathan’s crosshairs – which may help to explain the tobacco firm’s decision.

Its opposition will probably sting Sathianathan, who claimed credit for bringing Imperial on to the company’s shareholder register.

The boardroom battle followed Sathianathan’s decision to quit the company last November – an action he attributed to management obstruction.

He is thought to have fallen out with his co-founder Mahapatra, who is OCT’s largest shareholder with a stake of 21 per cent.

Investors holding a total of 46 per cent of its shares have agreed to support the current board, meaning the vote at the April meeting could come down to the wire.

It is not yet known whether Imperial’s stake has been included in this total.

Snoop Dogg’s Casa Verde holds a 2.2 per cent stake in OCT, meaning it could be another key ally in the battle over its future.