BP has benefited from a staggering £27billion cash haul from its operations in Russia over two decades, the Mail on Sunday can reveal.

The FTSE 100 oil giant’s ventures in the former Soviet Union have been highly profitable, but the firm and its boss Bernard Looney now face huge pressure to sever those ties, which date back 20 years.

Chris Bryant, an influential MP who sits on the Foreign Affairs Committee, accused BP of being ‘complicit’ in the invasion of Ukraine. ‘The tanks that are rolling into Ukraine are paid for by the profits of oil and gas companies in Russia – including BP,’ said Bryant, Labour MP for Rhondda. 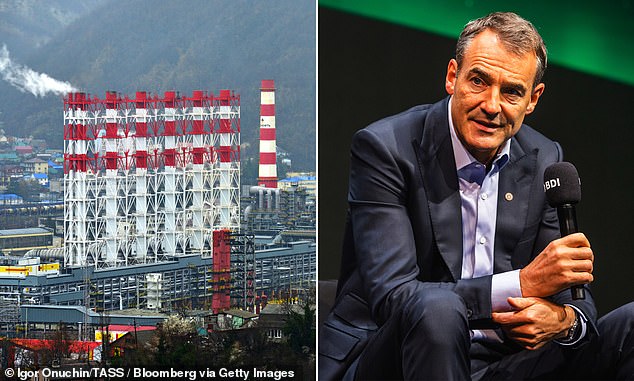 Under pressure: BP boss Bernard Looney is facing calls to quit the board of Rosneft

The FTSE 100 firm’s large-scale involvement in Russia took off in 2003, when it set up a joint venture, TNK-BP, with four billionaire oligarchs. When that partnership was dismantled in 2013, BP received $12billion in cash and acquired a near-20 per cent stake in Kremlin-backed oil company Rosneft, which is one of Russia’s largest producers of crude oil and a major supplier of its military. The company still has that holding in Rosneft. Looney sits on the board alongside former BP chief Bob Dudley and chairman Igor Sechin, who is a close ally of President Putin.

Business secretary Kwasi Kwarteng summoned Looney for a crisis meeting on Friday, leaving him ‘with no doubt’ about the strength of concern in government over its business interests in Russia. MPs and campaigners want Looney to resign from the board of Rosneft.

But this presents him with thorny moral, financial and practical dilemmas. Ending BP’s relationship with Rosneft would burnish his ethical credentials, which have already been under attack from environmental activists. But it would also choke off a valuable stream of income for the company. In addition, there is the pragmatic issue of finding a buyer for what has become a toxic investment.

Financially, BP’s foray into Russia has been one of the most rewarding in its 113 year history, yielding it £27billion in cash payments, after an $8billion investment. The company received $19billion (£14.25billion) in dividends from TNK along with $12billion (£9billion) in cash from Rosneft when the joint venture was sold. On top of that, a total of $5billion (£3.75billion) of dividends have flowed into its coffers from Rosneft over its nine years of owning a hunky stake.

Rosneft accounted for around $2.4billion (£1.8billion) of BP’s profits last year, a fifth of the $12.8billion total. Putin’s full-scale invasion of Ukraine last week has unleashed a barrage of economic sanctions from the West. When quizzed on BP’s Russia links earlier this month, Looney said BP sought to ‘avoid the politics’, but vowed that his firm would comply with Ukraine-related sanctions.

The MoS reported a fortnight ago that BP was expected to be handed another $1billion dividend from its stake in Rosneft.

Tory MP Tom Tugendhat, who chairs the Foreign Affairs Committee, said all firms ‘connected to funding Putin’s war machine should think very hard given that they are in scope of UK sanctions and those of our allies’.

Bill Browder, chief executive of Hermitage Capital and head of the Global Magnitsky Justice Campaign – which seeks to impose visa bans and asset freezes on human rights abusers and corrupt officials – also questioned Looney’s position on the Rosneft board.

‘It’s unseemly that a major British company CEO would be sitting in the same room as some of these now war criminals,’ he said.

However, Browder said exiting the stake altogether could be problematic. He compared BP’s stake in Rosneft to ‘nuclear waste’. He said: ‘No one is going to buy it. It’s worthless at the moment.’

Liberal Democrat peer Lord Teverson has warned that BP could find itself on ‘the wrong side of history’ due to events in Ukraine.

In a meeting between BP and Putin in 2019, former CEO Bob Dudley, who also sits on Rosneft’s board, said it was a ‘proud claim’ that BP accounted for more than half of the UK’s capital flows to Russia.

BP said on Friday: ‘We are closely watching the concerning developments in Ukraine and Russia. We are doing all we can to monitor the fast-changing situation. Our priority is the safety and security of our people. We are accounting for all our team.’ The company reiterated that it would ‘of course, comply with all relevant sanctions’.

The invasion of Ukraine has raised questions about peers Lord Goldsmith and Lord Barker, both of whom have strong links with Russia and are taking leaves of absence from the House of Lords. By taking leave, peers are not required to disclose how much they are paid by foreign clients, while keeping their honorary titles.

Goldsmith, who served as Tony Blair’s Attorney General until 2007, has represented the Russian Federation as a partner at law firm Debevoise & Plimpton. Barker runs London-listed aluminium producer En+, whose biggest shareholder is sanctioned oligarch Oleg Deripaska. Conservative MP Bob Seely said: ‘I think it is wrong for members of the House of Lords to be able to take leave of absence so they do not have to give information out about their clients.

‘When those clients are the Russian state or its proxies, it is even more indefensible. This is yet more evidence that we need a Foreign Lobbying Act.’

Prime Minister Boris Johnson told the House of Commons on Thursday that Europe must seek to end its ‘collective dependence on Russian oil and gas’ which has served to ’empower Putin for too long’.

Among further sanctions proposed by Johnson is a ban on Russia being able to access the SWIFT network, a payment system that allows banks, companies and individuals to make fast money transfers overseas.

However, a total ban has been met with resistance from other European countries.

An attendee told The Mail on Sunday that one of the options discussed was to block certain Russian companies and individuals from using the Swift network – rather than enforcing an all-out ban.

The source said: ‘That could be a blunt instrument and you could just find the Russians working their way around that if you have a blanket ban.

‘So what you might want to do is target individual institutions and individuals. The risk is the Russians pull out of Swift completely and create their own payments system.

‘So rather than shut out the Russians completely, you focus it on individual institutions, which appears to be the route the Government is taking.’