The bumper pay deal – for a year in which BP profits hit £9.4billion – comes amid calls for a windfall tax to be slapped on oil and gas giants to help households deal with soaring energy bills. 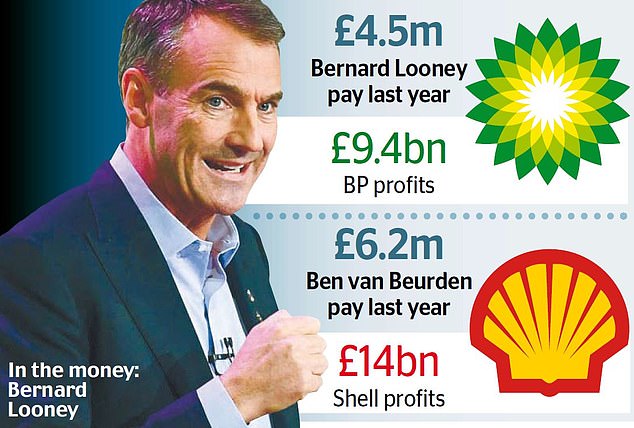 The huge pay packets come as British households are struggling to keep up with the worst cost-of-living crisis in a generation.

Inflation hit 5.5 per cent in January and is forecast to balloon to 8 per cent next month.

This will affect an estimated 22m households – and there are fears bills could hit £3,000 by the end of the year. Chancellor Rishi Sunak may lay out some emergency relief measures in next week’s Spring Statement – but these are not expected to relieve much pressure on already struggling families.

Ed Miliband, shadow secretary of state for climate change, said: ‘This is another sign that the oil and gas price crisis is a ‘cash machine’ for BP, as its chief executive Bernard Looney has said, while millions of families are plunged into fuel poverty. But still the Government refuses to act.

‘It’s only fair, right and just that we levy a one-off windfall tax on the profits of oil and gas producers so that we can help those families who face the most appalling hardship.’

BP and Shell have refused to back a one-off windfall tax and Sunak has also ignored the pleas.

The Government will unveil an energy security law next week aimed at reducing the UK’s reliance on foreign oil and gas, though this is not expected to include any type of oil and gas company tax.

Firms have said this type of levy would make it difficult for them to make vast investments in renewable technologies, which will be their bread and butter once the world weans itself off hydrocarbons.

But Luke Hildyard, director at the High Pay Centre, said: ‘People will take a view that if you’re paying your chief executive millions and at least a quarter of staff at least £126,000, then the argument that you couldn’t afford to simultaneously invest and shoulder a windfall tax looks a lot weaker. This is especially so at a time when millions of people are struggling with the cost of living crisis.’

Andy Prendergast, GMB national secretary, said: ‘Whilst vital NHS staff and carers are having to think twice about putting the heating on, these fat cats are taking ever larger pay outs from the companies making money hand over fist at their expense. This represents nothing less than shameful failure of the Government to make a meaningful intervention into the energy market whilst households and business struggle to keep the lights on.’

Speaking in November, Looney said soaring oil and gas prices had turned BP into a ‘cash machine’. The oil price has jumped from lows of $19 a barrel in the depths of the Covid pandemic to over $100. Brent crude was trading at $107 a barrel last night.

Looney did not take a bonus in 2020, when he netted just over £1.7m in total. He has been chief executive for two years and is now navigating the company through the Ukraine crisis.

But the company is in a better position after oil prices spiralled close to record highs over the last few weeks. In BP’s annual report, Paula Rosput Reynolds, head of the pay committee, said: ‘Bernard continues to lead the enterprise with a bold vision and has also demonstrated that his goal of ‘performing while transforming’ is being met.’