Confidence among British businesses has nosedived to levels not seen since the depths of the pandemic in October 2020 as the cost of living crisis takes hold, new research shows.

Rising energy costs, uncertain domestic and global economic conditions, and the unfolding impact of Brexit are weighing on firms’ prospects, according to the Institute of Directors.

Fewer UK firms are planning to ramp up investment in the coming months, with many putting those plans on hold as the war in Ukraine adds to a climate of ‘deep’ uncertainty. 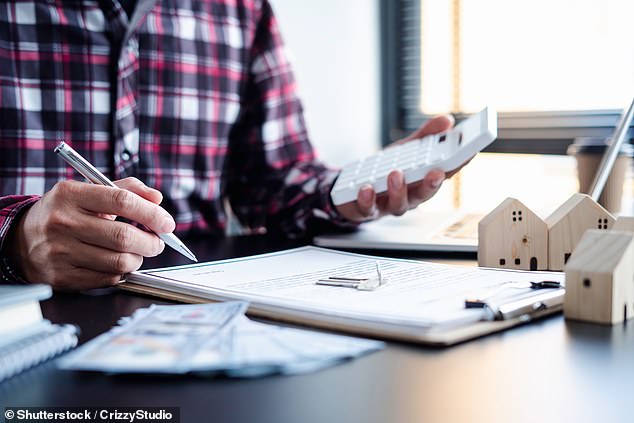 Rising costs: More than half of UK firms polled said energy bills would have a negative impact on their business

The IoD’s latest economic confidence index measuring how optimistic firms are about the UK’s prospects collapsed to -34 in March, from -4 in February, with investment intentions also falling dramatically.

Confidence among business leaders in the prospects for their own organisation has also fallen sharply to a net score of 23 per cent, from 39 per cent in February.

When asked what is having a negative impact on their business, more than half, or 53 per cent, of the 690 firms polled by the organisation said energy costs.

That’s three times as many as a year ago, when only 14 per cent mentioned gas and electricity prices.

The UK and global economic conditions were also blamed by around 44 per cent of businesses respectively.

And 40 per cent of firms said the new trading relations with the EU after Brexit were having a negative impact on their business.

Two in five business leaders have also said that employment taxes are having a negative impact on their organisation, up from 25 per cent before the increase in national insurance contributions was announced last autumn. 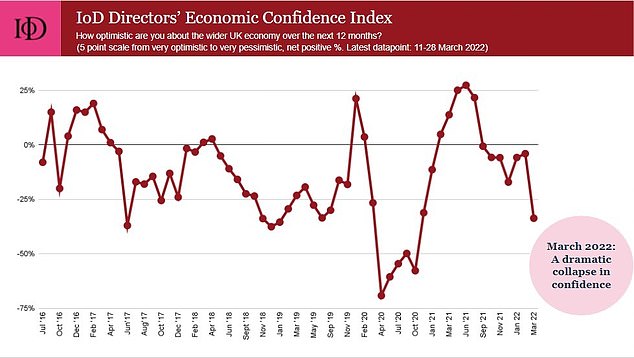 The IoD’s latest economic confidence index measuring how optimistic firms are about the UK’s prospects collapsed to -34 in March, from -4 in February

Kitty Ussher, chief economist at the Institute of Directors, said: ‘Business has experienced a dramatic collapse in confidence following the invasion of Ukraine, leading to many firms putting investment plans on hold.

‘The reality of higher energy and commodity prices, plus the hike in employment taxes, all overlaid with a general climate of deep uncertainty, is now having a real economic impact.

‘The Chancellor has said he will look again at tax incentives for business investment over the next few months. That work has now become even more urgent.’

On the positive side, there are some early signs that shortages of workers may start to be less acute, with fewer firms saying this was having a negative impact on business. 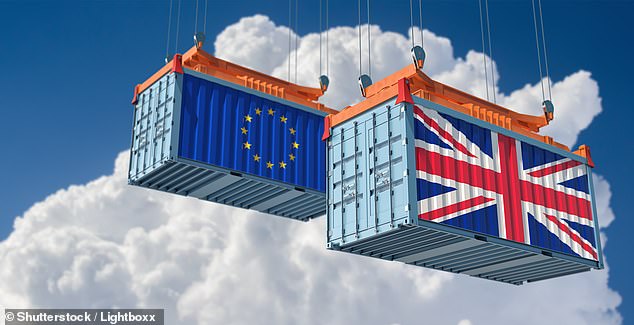 Meanwhile, fewer business are expecting wages and employment levels to rise in the coming months.

However, expectations of inflation continue to rise, with over half of businesses expecting annual inflation to be running at more than 6 per cent by the end of 2022.

The Bank of England expects inflation to hit 8 per cent this spring, and perhaps to soar even higher than that later this year as energy prices keep on climbing.

Energy bills are set to rise by an average of 54 per cent from tomorrow for those not on a fixed contract and with another barrage of tax hikes are set to plunge the country into the worst cost-of-living crisis for more than half a century.

The IoD has 20,000 members, including all sort of business, from large corporations to start-ups. It conducted the poll between 11 and 28 March.