Some buy now, pay later borrowers could be in line for payouts after the City watchdog found some of the rules around late payments fees were unfair.

These lenders, as well as Klarna, have also all agreed to change terms in unfair and unclear contracts, amid mounting concerns over this rapidly growing sector. 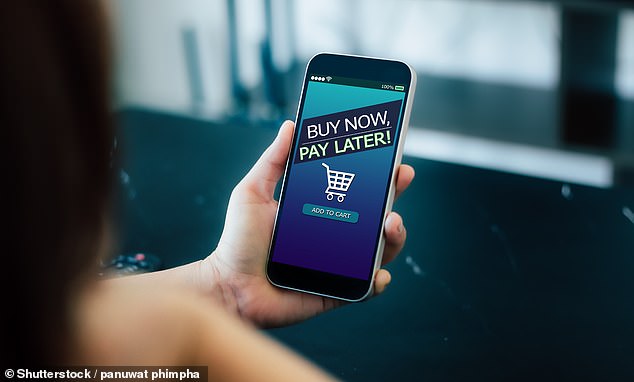 There is growing concern about the booming popularity of BNPL products, which are not fully regulated by the FCA

Usage has snowballed in the last few years – the UK market for these services nearly quadrupled to £2.7billion in 2020, according to the Woolard Review into the unsecured credit market.

However, the BNPL sector is still not regulated by the FCA, which instead used the Consumer Rights Act to assess fairness and transparency of the terms of contracts offered by providers.

Clearpay, Laybuy and Openpay have pledged to refund borrowers who were charged late payment fees even though they had cancelled their entire order.

Until now, shoppers who cancelled an order have had to keep paying instalments until the goods arrived back or the BNPL company had confirmation of the cancellation from the retailer.

If they failed to pay, they were hit with late payment fees.

But the FCA said the loans should have been cancelled immediately and the fees refunded, which three BNPL firms have now agreed to do.

Klarna does not charge late payment fees, so no such refunds are due.

The regulator encouraged people who think they may be due a refund to get in touch with their BNPL company.

‘Customers of other firms with a BNPL loan should contact their firm if they believe similar circumstances apply,’ it added.

All four of the firms have also agreed to amend other terms the FCA considered unfair.

These include the mentioned late fees for cancelled orders, as well as the lender’s right to suspend an account without notice or restrict access in a ‘unreasonable way’.

The FCA had also been concerned that some terms did not make it clear how a customer could cancel a ‘continuous payment authority’, which is created when someone gives a firm their payment card details and consents to the firm regularly taking money from their account.

The watchdog said the four firms ‘have all voluntarily agreed to change their approach’, adding it hoped the rest of the industry would follow.

Experts have welcomed the move, but stressed that the FCA needs to be given full powers to regulate the sector.

Richard Lane, director of external affairs at StepChange Debt Charity, said: ‘The four areas in which the FCA has been able to work with firms to drive contractual improvement are welcome, but not a substitute for regulation that will ensure the promotion of BNPL and the treatment of customers are fully up to the standards expected of other forms of consumer credit.’

The UK Government plans to change the law to bring some forms of unregulated buy now, pay later products into the FCA’s jurisdiction.

Concerns have been raised that people can rapidly build up relatively large amounts of debt through using BNPL as an option at online checkouts.

Barclays released research today which showed that nearly a quarter of BNPL users are concerned about their ability to repay their BNPL bills. This figure rises to over a third of 18 to 34-year-olds.

More than a third of BNPL users said they chose to pay using this method because they had insufficient funds in their current or savings account to pay for their purchase, and 10 per cent said it was because their applications for a credit card had been rejected.

‘The expansion of services means you can now spread the cost of the supermarket shop. This is a really worrying development, because it means in subsequent weeks or months, you’ll be paying for multiple shops at once.’