Clever ways to remove pollutants from your home


Never have we been more interested in the air we breathe — and how contaminated it is. But it’s not just in cities that we’re vulnerable to the toxic impact of air pollution.

Our homes, where we spend more than 60 per cent of our time, can be five times more polluting than on a busy street, according to U.S. scientists. 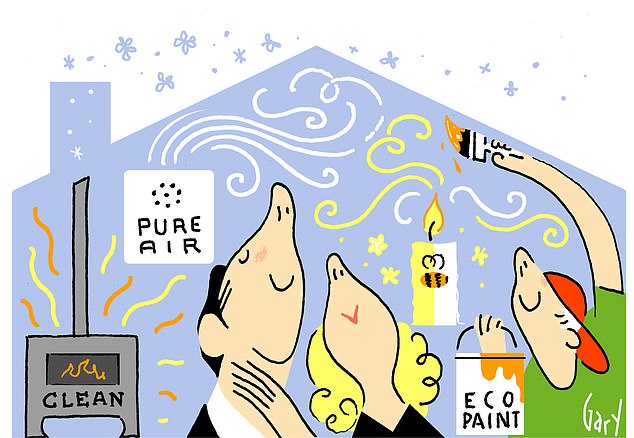 Health threat: Our homes, where we spend more than 60 per cent of our time, can be five times more polluting than on a busy street, according to U.S. scientists

The pollutants can come in surprising forms — from toxic cleaners to paint on the walls, the upholstery in sofas and scented candles. One of the main culprits is the wood-burning stove.

But it’s not all doom and gloom — there are ways to mitigate the damage. The first place to start combatting toxic fumes is to ventilate your rooms — as well as simple swaps, investment upgrades and new tech.

Purifiers have come on in leaps and bounds. Not long ago they were enormous, ugly pieces of kit that took up a large amount of space, but now they blend in seamlessly — meaning you’re more likely to use them.

Research has shown that purifiers by the brand Molekule destroy more than 99 per cent of Covid virus particles in one hour and inactivates H1N1 flu virus by up to 99.99 per cent: the U.S. Food and Drug Administration (FDA) has approved Molekule’s Air Mini+.

It’s not the only good-looking air purifier: IKEA’s latest product in the ‘smart air’ division is a purifier incorporated into a side table, which has a two-filter system to catch big particles such as hair and dust, and a smaller filter that captures 99.5 per cent of smaller airborne particles, such as PM2.5 particles, dust and pollen (Starkvind, £165). 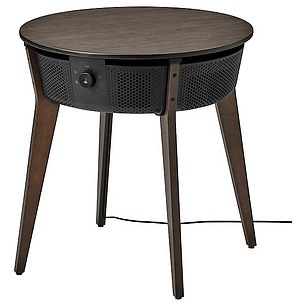 Meanwhile, the new Beurer Fresh Breeze Purifier and Fan can cool you in summer, purify your air and with a little handle on the top can be carried around (£54.99, lakeland.co.uk).

It’s no secret that wood burners are not great for our lungs; a report, published by the European Environmental Bureau last year, found that even the new Ecodesign-ready stoves — which have some of the highest eco-credentials on the market — can emit up to 750 times more tiny particles than a modern HGV truck.

But there are still options: the Stove Industry Alliance launched its ‘clearSkies’ certification recently, which offers higher efficiency than before.

British manufacturer Burley Appliances claims to produce one of the cleanest and most efficient stoves.

‘Our stoves are so clean one of them can be 300 times less polluting than an open fire,’ says Steve Barson, managing director of Burley. Stoves start at £900.

Traditional paints can release VOCs, but there is a new breed of eco-friendly paints on the market. Some, including Edward Bulmer and Little Greene, have stripped out nasty chemicals and are entirely natural.

But other brands have gone a step further and now use formulas that actively absorb CO2 from your walls, such as those from innovative paint company Graphenstone.

‘As the paint cures over its lifetime, the lime coatings absorb up to 5.5 kg of CO2 per 15 litres of paint from the room where it’s applied,’ Patrick Folkes, director of Graphenstone, says.

Another major source of air pollution is the cleaning products we use, according to a report in the journal Science. But a range of new brands are there to tempt us away from the toxic cleaners.

‘When switching to gentle, natural alternatives we are not only protecting our health, but the planet, too.’

As well as using natural scents, the new breed of cleaners arrive in concentrate form to reduce packaging. Other ‘waterless’ brands include Neat (available at Lakeland) and gethomethings.com.

When adding fragrance to your home watch out, too, for scented candles, which can be a source of toxins.

Opt for beeswax or soy candles instead of paraffin, such as the range by Evermore London.

Light them up and breathe deeply, knowing the air inside your home is so much cleaner.

Savings of the week! Clocks 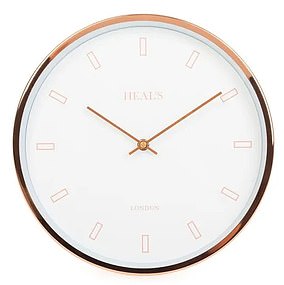 The wristwatch zoomed back into fashion. Now the wall clock is making a return to our homes.

With savings of up to 50 per cent on offer ahead of March 27 when the clocks go forward, it’s time to bag a bargain.

Habitat’s Bourke contemporary grey and gold clock is down from £35 to £17.50.

If you like traditional with a funky touch, Dunelm’s large wooden 60cm clock with Roman numerals should suit. It is down a third from £35 to £24.50.

If you want to splash out, Amara is offering 20 per cent off Newgate’s clocks such as the Number One Italian, now £105.