Sportswear business Decathlon has suspended its activities in Russia after public outrage.

The French company faced a barrage of criticism for staying in the country, including from the Ukraine foreign minister and social media users who called for a boycott of the retailer.

Decathlon, which has 60 stores in Russia, said it would continue to support its 2,500 staff there. 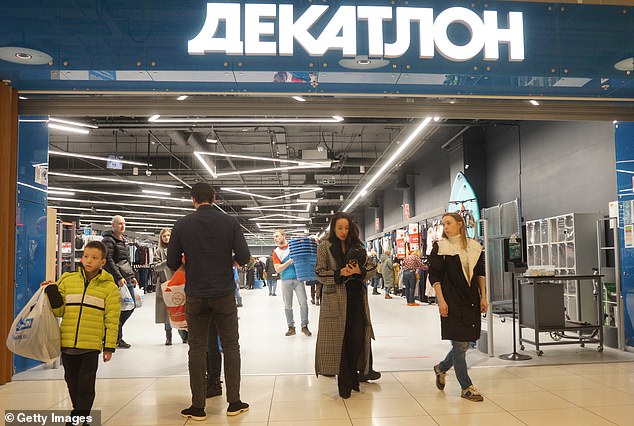 Shoppers leave a Decathlon store in Moscow today. Decathlon faced a barrage of criticism for staying in the Russia, including from the Ukraine foreign minister who called for a boycott of the retailer

A company spokesman said: ‘In the dramatic context of Ukraine, we are following the evolution of events and particularly the situation of those directly affected.

In strict compliance with international sanctions, Decathlon notes that the supply conditions are no longer met to continue its activity in Russia.’

Decathlon is owned by the French retail giant Association Familiale Mulliez, which has been under fire over the failure of its Auchan supermarket chain to pull out of Russia.