Defence stocks in the UK, Europe and the US rallied after Germany said it would increase military spending.

German Chancellor Olaf Scholz pledged to pour more than £85billion into strengthening the armed forces and spend 2 per cent of gross domestic product a year on defence – hitting the Nato target after years of resistance.

He said: ‘It is clear we must invest much more in the security of our country to protect freedom and democracy.’ 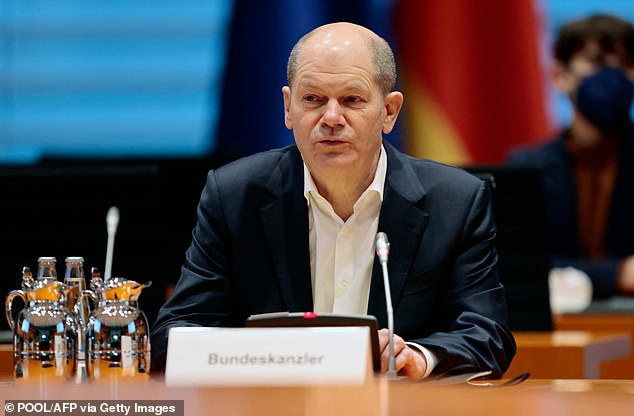 War footing: German Chancellor Olaf Scholz (pictured)  has pledged to pour more than £85bn into strengthening the armed forces and spend 2% of GDP on defence

European defence companies were immediate beneficiaries. In London, FTSE 100 aerospace giant BAE Systems rose 10.2 per cent to a record 719.6p, giving it a value of £23.5billion.

Fellow defence firm Chemring was up 13.4 per cent while Qinetiq gained 11.2 per cent and Babcock 7.9 per cent.

German tank and armoured vehicle maker Rheinmetall also hit a record high in Frankfurt, soaring 24.8 per cent, while sensor-maker Hensoldt was up 42.6 per cent.

France’s Thales added 11.9 per cent and Italy’s Leonardo gained 15.1 per cent. In the US Lockheed Martin was up 4.6 per cent, Raytheon 3.1 per cent better and Northrop Grumman 6.2 per cent higher.