Divorcing couples should get financial advice even if it is amicable


Splitting couples can get an extra small bit of financial help to make their divorces more amicable, thanks to £500 mediation vouchers.

But with huge sums in terms of property and pensions potentially at stake, as well as serious questions about both partners’ financial futures, many would be wise to look beyond mediation and solicitors and get financial advice too.

Getting financial planners involved early on can help both parties understand the implications of dividing up the household or family finances and lead to less potentially crossed swords down the line. 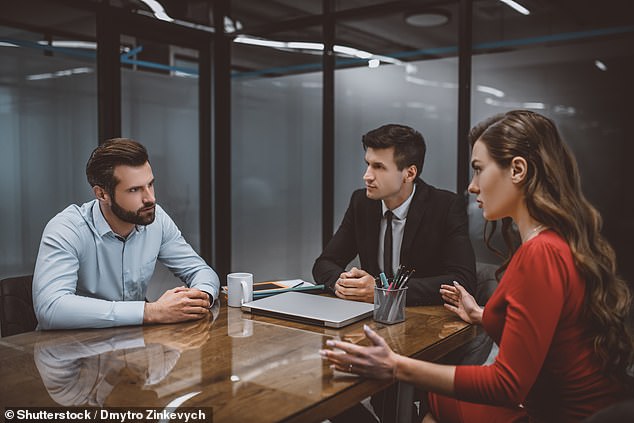 Separating couples could qualify to get £500 towards mediation services, as the government are topping up a scheme to help relieve pressure on the backlogged courts

The government is expanding its voucher scheme for divorce mediation, meaning an extra 2,440 families could get £500 toward settling their separation outside of court.

The Ministry of Justice is putting an extra £1.3million towards the vouchers, which can be used to fund mediation consultations – though the scheme will only run until the end of March this year.

Mediation is when a divorcing couple meet with a trained professional who helps them reach an agreement on finance and custody issues.

This can be cheaper than going to court, as well as potentially less stressful.

The average cost of divorce can be as high as £15,000 if legal fees and other costs are factored in.

Meanwhile, mediation sessions could end up costing a fraction of that – around £2,000 to £3,000 in total depending on the number of sessions booked.

But while a mediation might help to cut the cost of the process itself, separating couples will still need to make tough decisions about how to split up their financial assets.

A financial advisor can help split home and pensions

Depending on your circumstances, getting financial advice could be as important as speaking to a mediator or solicitor – and the earlier you get a financial expert involved, the better.

Ben Glassman, financial planner, partner and head of family and divorce at Tilney Smith & Williamson says: ‘Getting good independent legal advice is always important, even if the parties are ‘on good terms’.

What is the government mediation scheme and who will qualify?

Since the government mediation voucher scheme’s launch in March 2021, 4,400 vouchers have been used according to the Ministry of Justice (MoJ).

Of those that have used the vouchers so far, 77 per cent reached full or partial agreements away from family courts.

The scheme is administered by the Family Mediation Council (FMC) on behalf of the MoJ.

There is no financial means test, and according to the Law Society, couples can qualify for the voucher if they:

Mediations aim to help couples improve how they communicate, and reach an agreement over finances and custody issues.

The MoJ says: ‘Mediation can be less stressful than going to court, especially for children who are involved in proceedings. It is also confidential, unlike proceedings in the family court.’

‘However, we would argue that having a financial planner involved early in the process is just as important.

‘Independent financial assessments can benefit both the divorcing parties, and achieve clarity around the real value of the couple’s matrimonial estate.’

One way a financial planner can help in a separation is to challenge both parties’ assumptions about how best to divide up their assets.

‘The gut reaction is often to hang on to the family home, but this may not always make financial sense, especially when there are other sizeable assets to consider such as pensions,’ Glassman adds.

It is important for both partners to understand how splitting up will affect their plans for retirement.

Sarah Coles, senior personal finance analyst at Hargreaves Lansdown, says: ‘In many cases, a pension is one of the largest assets built up during the marriage – often largely in the name of one person. And if it involves defined benefit pensions, these can be fiendishly difficult to value.

‘You need to understand your options when it comes to splitting pensions, to make sure your divorce doesn’t derail retirement.’

Drawn-out divorces can result in a tax bill

The main disadvantage with just consulting a mediator is that they are neutral and don’t work exclusively for either party.

If your divorce drags on, you may also need to seek the advice of a tax specialist.

Coles says: ‘If the divorce is completed in one tax year, when you pass investments between you and your ex, there’s no capital gains tax (CGT) to pay. If you go into a new tax year, you may be liable.

‘The rules on this are set to change to give divorcing couples more time, but we don’t yet know when this will kick in.

‘Older couples are far more likely to have more investments, so are more likely to be subject to CGT. There are steps you can consider, like bringing transfers forward, so you will need to discuss these with your lawyer.’

In addition, transferring large pension holdings can result in charges if one party is awarded cash from the other’s pension, and therefore goes over their lifetime allowance. 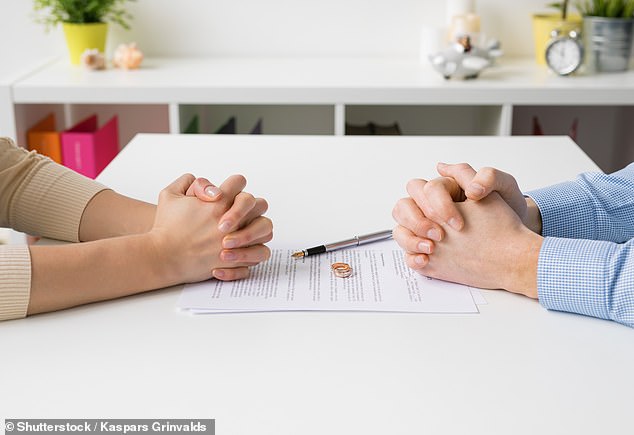 Dividing up a pension in a divorce can be especially tricky, due to tax-free limits

The lifetime allowance, which currently stands at £1,073,100, is the maximum in retirement savings you can build up over a lifetime before tax starts to be charged on it.

There are various protections against lifetime allowance charges but they are complicated, so tax advice may prove useful here.

Glassman explains: ‘Ongoing changes in rules have made lifetime allowance issues anything but simple, and additional caution is needed for those getting divorced.’

One area that can be especially difficult is when a pension is subject to ‘transitional protections’.

When the government has previously reduced the maximum lifetime allowance, it allowed some pensioners with more than that amount saved to ‘protect’ their pension at that amount.

However, in some cases that meant that they would not be able to put any more in to their pension, which could be a problem in a divorce.

We know of lots of examples where a divorcing couple have outlined that they are on good terms with each other, but once they start getting into the splitting of financial assets things can quickly turn sour

‘Transitional protection affects both the debited and credited member, and in certain circumstances can lead to the loss of tax protection altogether,’ Glassman says.

‘Understanding the interactions of these protections at divorce and the strategies that can mitigate potential tax charges can result in significant savings for both parties, even into seven figures.’

State pensions are also important. Glassman says: ‘Women especially often have gaps in their career, which could affect their state pension entitlement.

‘It’s important to obtain a projection, particularly when looking to equalise the pension entitlement of the two spouses. The value of a guaranteed income of nearly £9.5k from age 66 (currently) until death is not to be underestimated.’

It can also be helpful for each partner to get advice on how to rebuild their wealth after divorce.

Focus should be given to how to get savings back on track and top up a pension, as these are assets that are bound to have taken the biggest knock from a divorce.

Mistry adds: ‘Where once your goals may have centred on you jointly as a couple, and your assets would have been geared towards this, post-divorce it is important to revisit those goals and structure your assets according to your new status and needs.’

How will ‘no-fault’ divorces change things?

From 6 April this year, the introduction of the ‘no-fault’ divorce will allow couples to get divorced solely on the basis that the marriage has broken down, rather than needing to lay blame on either individual.

Dal Heran, family lawyer with Wright Hassall, explains: ‘Currently a person may file for divorce for something based on the other’s behaviour such as ‘failing to communicate.’

‘However, from April 2022 a divorce can be granted with no proof of wrongdoing, and just on the grounds that one person simply doesn’t want to be married to their husband or wife anymore.’

While some couples may be waiting until April to ensure a more amicable split, it is still advisable to get a financial advisor on board.

Glassman adds: ‘We know of lots of examples where a divorcing couple have outlined that they are on good terms with each other, but once they start getting into the splitting of financial assets things can quickly turn sour.’