Some 39,315 zero-emission models entered the road last month – a 79 per cent increase on March 2021 – with battery powered cars now accounting for one in six registrations.

Tesla had a huge part to play in the record boom, with the Model Y and Model 3 the best-selling cars during the month, latest figures published today by the Society of Motor Manufacturers and Traders (SMMT) reveal. 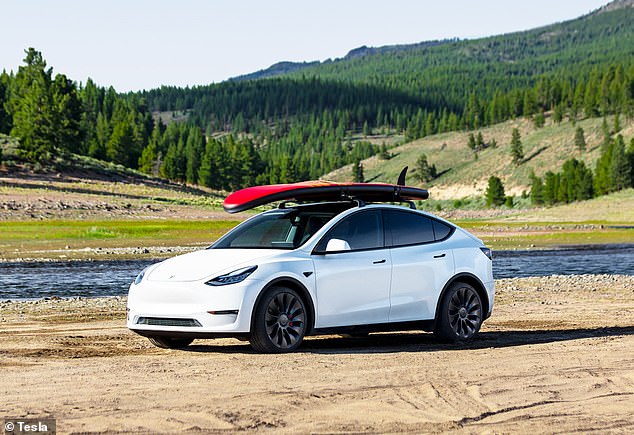 Tesla boom: Almost 40,000 electric cars were bought in March, which is more than any single month on record. The Tesla Model Y (pictured) was the best-selling car

While appetite for electric vehicles soared, it came against a market backdrop of declining registrations in one of the most important months of the year, with new car sales down 14 per cent due to ongoing supply chain shortages – especially semiconductor computer chips.

Yet shortages don’t appear to have put a stranglehold on sales of electric cars.

Manufacturers generally appear to be prioritising the output of these relatively more expensive motors, which is reflected by booming battery electric vehicle (BEV) registrations in March.

Sales of almost 40,000 zero-emission cars last month is more than the entirety of 2019, with BEVs now representing 16.1 per cent of all new cars bought in the UK.

These two cars accounted for a third of all BEV sales in March, with the pair outselling every other car across all fuel types last month.

Tesla is known to backload its vehicle deliveries until the end of every quarter, with a substantial shipment arriving last month from the Shanghai factory where Model 3 and Model Y cars are currently produced for the UK market – though the latter will soon be arriving from its new European factory in Berlin, Germany. 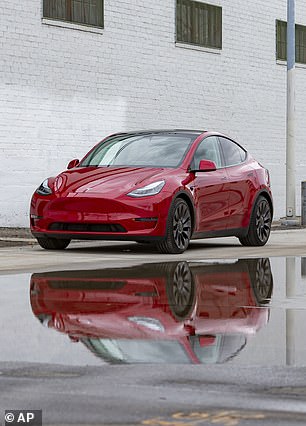 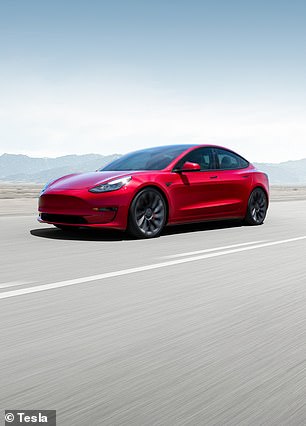 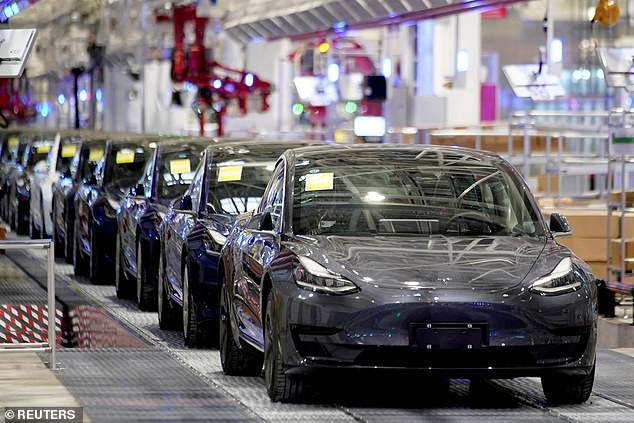 A substantial shipment of Teslas arrived last month from its Shanghai factory, where Model 3 (pictured) and Model Y cars are currently produced for the UK market 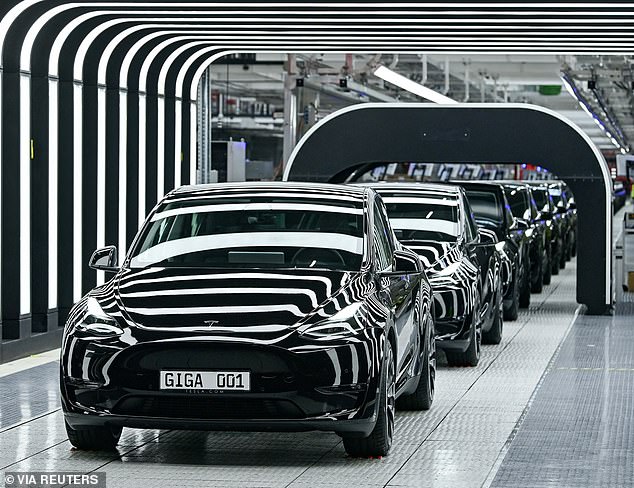 Soon, Tesla Model Y SUVs for the UK will be produced at the US brand’s new European factory in Berlin, Germany (pictured)

As a result, electrified vehicles comprised more than a third (34 per cent) of all new car registrations.

In contrast, diesel sales more than halved compared to a year ago, dropping from 54,003 registration in March 2021 to just 25,305 last month. It means diesels now make up only one in ten new cars bought by Britons. 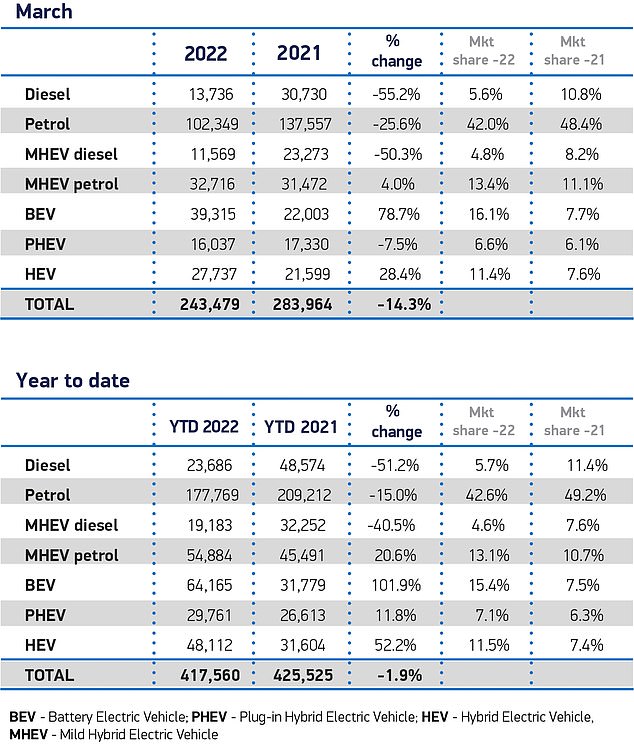 Diesel registrations more than halved compared to a year ago and petrol car sales also slipped by a fifth in March, official SMMT figures show

Richard Peberdy, UK head of automotive at KPMG, said a combination of supply shortages, the war in Ukraine and heightened restrictions in China will likely see car makers continue to focus on their outputs of ‘higher margin models’, which includes BEVs.

Ian Plummer, director at Auto Trader, added that many of the BEV registrations in March were likely orders made several months ago, though added that escalating fuel prices in recent weeks has driven more consumers to consider an electric car.

‘There was already massive growth in this segment and, if anything, the demand for EVs is now even stronger as prices at the pumps rise on the back of the Ukraine crisis,’ he told us.

‘Our own marketplace data shows a bigger share of would-be drivers considering EVs since the war began as the resulting rocketing fuel prices make electric cars a more attractive option, despite the upfront price premium.’

Auto Trader’s own data suggests that new BEV sales should overtake both traditional petrol and diesel car registrations by 2025.

However, Mr Plummer warned that ministers need to ‘make sure we can accommodate that predicted growth’ with a sizable – and reliable – charging network and incentives in place to tempt drivers to turn their back on combustion-engine cars.

Ciara Cook, Research & Policy Officer at EV research group New AutoMotive, said it is seeing ‘encouraging growth’ in certain areas of the country, with around one in three new car registrations being battery-only vehicles in places like Kent and Peterborough. 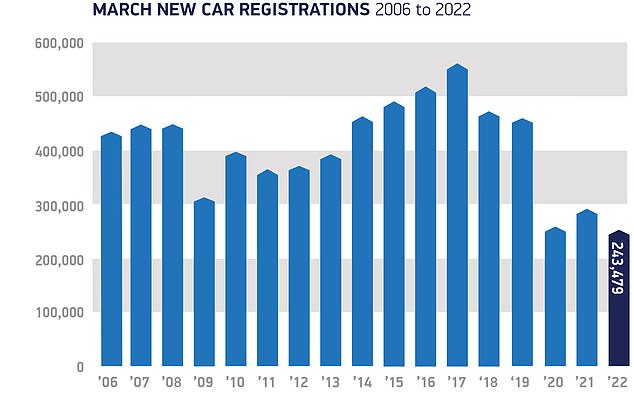 A total of just 243,479 registrations in March is the lowest for the month since 1998. That’s bad news for the automotive sector, which is reliant on strong ‘new numberplate’ months of March and September to drive annual demand

March is the one of the biggest months for car sales due to the arrival of a new numberplate – in this instance the ’22’ plate.

However, there were just 243,479 registrations, which is the lowest for the month of March since 1998, according to official records released by the SMMT this morning.

‘Given around 20 per cent of total annual registrations are usually recorded in March, the result is massively disappointing for the sector and underscores the long-term impact the pandemic is wreaking on the industry,’ it said in a statement.

The trade body said the decline in sales wasn’t due to a lack of demand – reporting ‘robust order books’ for the first quarter of 2022 – but difficulties to produce enough cars to meet appetite with ongoing shortages of components, namely computer chips.

‘Placing orders now will be beneficial for those looking to take advantage of incentives and lower running costs for electric vehicles, especially as the Ukraine crisis could affect supply still further.

‘With increasing household and business costs, government must do all it can to support consumers so that the growth of electric vehicles can be sustained and the UK’s ambitious net zero timetable delivered.’

The SMMT said the ongoing constraints on supply are continuing to prevent the sector from moving into full recovery following the pandemic, warning that the invasion of Ukraine could cause a long-term strain on supply chains.

‘More broadly, however, economic headwinds such as rising energy costs, fuel costs, inflation and a squeeze on household incomes could impact new vehicle demand,’ it added.