‘The cap is the only option for most’: Energy price cap now level with the 10 cheapest variable deals available as bills climb in the cost of living crisis

By Grace Gausden For This Is Money


There is now only a £2 a year difference between the top ten cheapest variable energy deals available to households and the quarterly price cap, new research has revealed.

The gap, which compares to a £171 gap seen a year earlier, stayed stagnant between October and December 2021, according to data from Cornwall Insight.

This further confirms predictions that the forecasted 50 per cent rise to the cap, which is only for default tariffs, in April will impact the majority of consumers, with cheaper deals simply unavailable.

Consumers will find out on 7 February how much the cap is to increase from April, with experts predicting it could be as much as £600.

It comes at a time when the cost of living is soaring with many concerned about how they will pay their bills.

James Mabey, analyst at Cornwall Insight, said: ‘Over the past year the gap between the default tariff cap and the cheapest market deals has been slowly decreasing.

‘Our figures from the last quarter of 2021 have shown competition between suppliers has stagnated, with ever increasing wholesale prices leaving suppliers unable to offer any competitive deals below the Ofgem set price.’

He adds: ‘These are turbulent times for energy suppliers. Only this month we saw Together Energy become the first victim of 2022, following on from nearly 30 suppliers leaving the market in 2021.

‘The cap, once a protection for customers, with increases matched by competitive cheaper deals as recently as April 2021, has now become the only option available to most, as energy companies try hard to keep their heads above water.’

What if your fixed energy deal is ending?

Customers whose fixed tariff is coming to an end soon are being advised to let their deal roll onto a default deal as these are covered by the price cap and are much cheaper than current fixed offers.

However, those looking at what offers are available should check whether the estimated price for the default deal covers the current price cap or takes into account the estimated rise for the new level.

If it only covers the current average domestic dual fuel price cap tariff of £1,277, prices are likely to soar in April when the new level is in place.

Anyone who is considering moving to another fixed deal should also be aware that wholesale prices could change within the next year and you could end up overpaying if stuck in a contract.

However, experts believe that costs will remain high for the foreseeable future.

Mabey added: ‘It is hard to determine whether the gap between delivered costs will fall below the price cap once more. Our current projections show this is unlikely to happen anytime soon, with high wholesale prices showing no evidence of coming down.

‘In the short-term the Government has a number of options available through the tax and benefit system to shield consumers from the significant hikes.

‘However, if we want to get a handle on this ever-volatile market, some serious long-term decisions on the future of the default tariff cap, pricing in the wholesale market and where the UK sources its energy from will need to be made.’ 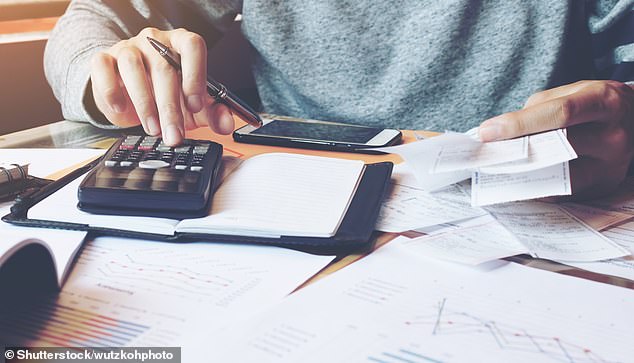 The cost of living has increased substantially, making bills more expensive for millions

How the cost of living crisis is hitting

The cost of living has soared in recent times with many struggling not only to pay their energy bills but also other household costs.

To combat the hikes, 51 per cent of consumers said they had been putting the heating on less frequently due to energy price rises and 46 per cent had reduced their usage of lights or appliances around the home.

Only a quarter reported not having taken any such measure in response to energy costs increasing.

Which? said it is calling on the Government, regulators and companies to work quickly to make sure they are ready to support customers in financial distress.

It wants the Government to urgently clarify what support will be put in place for those struggling to pay rising energy bills.

It said the Government must also ensure people can rely on robust consumer protections that will prevent them from being exploited and regulators must intervene when businesses treat customers unfairly.

Energy crisis: What can be done to lower bills?

The tricky question is what do we do? Because there is no magic bullet here, writes This is Money editor Simon Lambert.

There has been plenty of talk of a VAT cut, which seems like an imminently sensible move, but the tax is only 5 per cent on energy bills and Cornwall Insight reckons this would shave just £90 on average off dual fuel bills.

Critics of a VAT cut say this would also help wealthier households. But I would argue that’s a red herring: there is a lot to be said for the odd universal benefit and a nation that hands out Winter Fuel payments to pensioners both rich and poor shouldn’t worry too much about a temporary VAT cut for all.

Other options, according to Cornwall Insight, include deferring recouping costs for failed suppliers, which would also save about £90, moving green levies to general taxation (£160), and deferring payment of energy network costs (£330). This New Scientist article digs into those in some more depth.

Meanwhile, either direct financial support to customers, or loans to suppliers to mitigate energy price rises could both be worth about £500 off bills.

These two are the big guns that could be wheeled out, but would cost the most money.

Read the full story: What can Britain do to ease the pain of energy bills rocketing 50% in April? From a VAT cut, to paying suppliers SIMON LAMBERT looks at the options