Roman Abramovich has been handed dividends worth more than £150m by a Russian steelmaker listed on the stock market in London.

As Vladimir Putin’s forces bore down on the Ukrainian capital of Kyiv, FTSE 100 giant Evraz doled out another £545m dividend to shareholders. 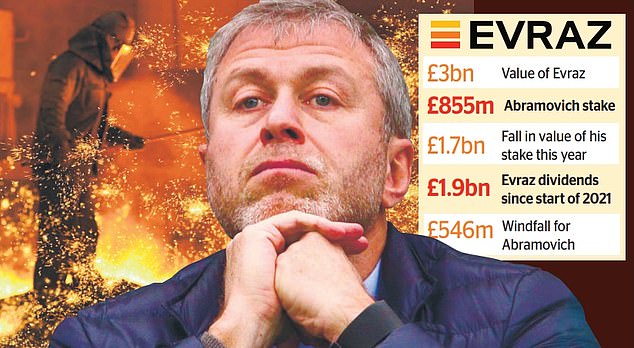 Watching brief: Roman Abramovich has been handed dividends worth more than £150m

The bumper dividend – announced as Evraz posted a trebling of profits to £3.1billion – raised fresh questions over the presence of companies with close ties to Russia and its billionaire oligarchs on the stock market in London.

Evraz is a member of the prestigious FTSE100 index alongside blue-chip household names such as Rolls-Royce, Tesco, Royal Mail and Astrazeneca.

But shares in Evraz and other London-listed companies with links to Russia have swung wildly in recent days as Putin wages war on Ukraine.

The stock crashed 30 per cent on Thursday before recovering yesterday with a 19.5 per cent rise. But it is still down 66 per cent this year.

The rout has cost Abramovich – who also owns Chelsea Football Club – £1.7billion though his stake is still worth £855m.

Other Russian linked stocks including miners Polymetal International and Petropavlovsk have also been caught up in the fall out of the conflict in Ukraine.

Evraz has not been subjected to sanctions – with penalties from the UK and Europe so far focusing on individuals and banking groups. But the company admitted it had started contingency planning in case restrictions were slapped on its exports.

Costs would be slashed and dividends would be temporarily scrapped, the group said.

Critics said London-focused fund managers may need to think twice about their holdings in firms such as Evraz. Sam Armstrong, of think-tank the Henry Jackson Society, said: ‘It increasingly seems like resources companies are likely to be targeted in sanctions in the coming days and any reputable fund would not wish to put the pension or saving funds of ordinary Britons in precarious stock holdings.’

Russ Mould, investment director at AJ Bell, said: ‘The Ukraine invasion raises some very pertinent issues – namely why are Evraz and Polymetal in the index in the first place?’

He added that these were some of the companies that had actually hindered the Footsie’s performance for years.

‘One reason why the FTSE100 has done so little for so long, especially relative to its global peers, was the decision to let in so many overseas names in the last emerging markets/commodities boom,’ said Mould. ‘You can argue this has not helped, as the timing was poor at around the peak of the commodities boom, as well as introducing new layers of governance and geopolitical risk.’

Evraz is Russia’s second-largest steel company. It was founded by former Soviet space scientist Alexander Abramov initially as a metal trading business in 1992.

The 63-year-old owns 19 per cent of Evraz and also has a stake in the world’s biggest nickel producer Norilsk Nickel.

The company said it has no plans to ditch its listing in London, home to one of the most prestigious bourses in the world.

Finance boss Nikolay Ivanov said: ‘We have no plans to delist from the London Stock Exchange at the moment.’

But Evraz said it was still considering arranging a second listing in Moscow, which could take place this year.