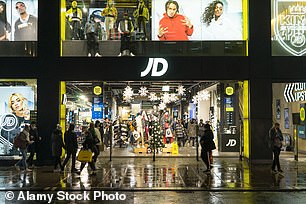 JD Sports surprised investors by delaying the release of its annual results. The so-called King of Trainers said its auditor, KPMG, needed more time to go over its accounts and report on its disposal of Footasylum.

The competition watchdog blocked a £90m takeover by JD, which has 405 stores in the UK, of the smaller High Street shoe shop last year.

The CMA said a tie up between the two could lead to a substantial reduction in competition and ordered JD to sell Footasylum, which has 65 stores.

This week it handed a £4.7m fine to the pair for breaching an order to remain independent while it investigated the takeover. JD said the delay would allow it ‘to report on the outcome of the divestment of Footasylum’.

In a boost to investors, JD also served up an increased annual profit forecast. The footwear giant said profit for the year to January 29 will be at least £900m, up from an earlier estimate of at least £875m.