FD Technologies shares have skyrocketed today following its announcement that it had struck a partnership with the Microsoft Corporation.

The Northern Irish software company saw its share price climb by 27.7 per cent to £19.38 by the late afternoon after it revealed that its data analytics platform would be incorporated onto Microsoft Azure.

Azure is the technology giant’s cloud computing platform – and the world’s second-largest behind Amazon Web Services – that offers an extensive range of services ranging from artificial intelligence to virtual machines and file storage. 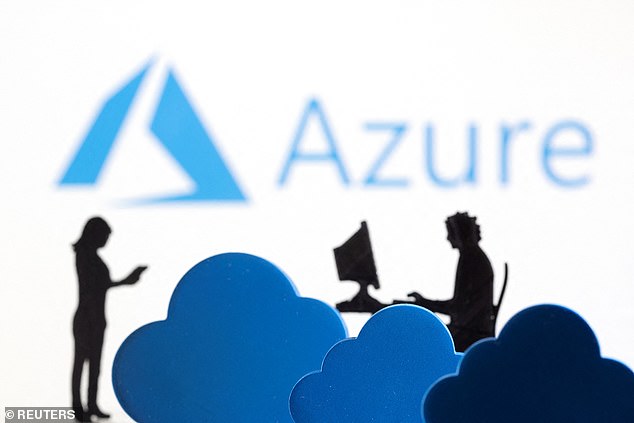 Demand for the platform has soared over the last two years, as the imposition of lockdown restrictions by governments led to tens of millions more people working from home and the adoption of hybrid working practices by companies.

In Microsoft’s most recent quarterly results covering the last three months of 2020, it declared that revenue from Azure and other cloud-based services jumped by 46 per cent year-on-year to $18.3billion.

FD Technologies said the integration of its KX Insights platform would enable Azure users to better store their data, boost their productivity, and lead to lower costs when compared to legacy systems.

The firm further revealed that it would collaborate with Microsoft on creating new products and services aimed at the financial services industry, with a particular focus on the capital markets.

Its chief executive Seamus Keating described the tie-up as ‘a landmark agreement for KX’ and said the partnership ‘accelerates our mission to enable organisations to drive value from their real-time data assets.

He added: ‘Enterprises will benefit from the unrivalled performance, scalability and security of KX Insights optimised for Microsoft Azure.

‘In addition, we are excited to partner with Microsoft in developing technology solutions that address the demanding requirements of financial services organisations.’

It is listed on the London market’s AIM exchange and has offices from New York to Hong Kong and Newry in Northern Ireland, where its headquarters have always been situated.

The surge in its share price today marks a dramatic departure from the gradual decline in value they have undergone since the start of the year and comes amidst a broader downturn in publicly-traded technology stocks.

But despite the considerable rebound in FD Technologies shares today, their value has still fallen by around 5 per cent in 2022 and they are a third lower than they were 12 months ago.

Yet analysts at Investec have maintained their buy rating, arguing that they ‘see a business about to emerge from a transition period…into a period of growth for reported financial performance.’

They added: ‘The agreement is clearly a major endorsement of the KX Insights product and strategy launched last year. We are aware of only a handful of similar partnerships of this type.’

harrry
Previous article
Savers with lifestyle pension funds risk ‘sleepwalking’ into bond sell-off
Next article
Can I invest in a Isa to buy shares and still use my existing one?