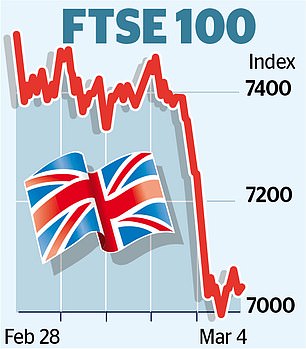 The FTSE 100 suffered its worst week since the pandemic crash as the war in Ukraine sparked a sell-off across global markets.

And it is the biggest weekly slump since 2020, when coronavirus and lockdown measures caused it to lose 17 per cent of its value between March 9 and March 13.

The sell-off came as the LSE suspended another eight Russian businesses from trading in the UK. The stocks, which include supermarket chain Magnit and investment firm Sistema, add to the 28 suspended earlier this week. There are no Russian businesses now trading on the LSE.

Traders and analysts fear the fallout from the conflict and sanctions on Russia will ripple across the world, exacerbating issues that have arisen since it emerged from the pandemic.

A key concern is prices of raw materials, which saw their biggest weekly increase in over 50 years, according to the S&P GSCI Index, which tracks commodity prices.

Oil prices spiked to their highest levels in around a decade. And natural gas costs ballooned, briefly hitting a record of around 450p a therm in the UK yesterday following a Government decision to ban Russian ships from British ports.

Some politicians and activists want Russian oil and gas exports to be cut off from international markets, to deprive Vladimir Putin’s regime of income.

However, that would probably inflict even more pain on household energy bills, which could rise to over £3,000 per year. Meanwhile, drivers are being affected after the average price of unleaded petrol hit a record 151.67p per litre on Tuesday and diesel reached an all-time high of 155.23p.

The efforts to isolate Russia also risk a global shortage of metals, of which it is a key exporter, and as a result prices have rocketed.

Nickel, used to make stainless steel and electric car batteries, is at its highest level in around 15 years while copper and aluminium prices have also spiked. Food has been hit as the price of wheat hit a 14-year high amid fears of shortages. Ukraine and Russia account for about 30 per cent of global exports – the war could significantly shrink supplies.

harrry
Previous article
For £1k a month, which of these homes on Zoopla would you choose to rent?
Next article
Xavier Rolet refuses to quit Russian fertiliser company