There was an even more dramatic turnaround on the stock market in Moscow. 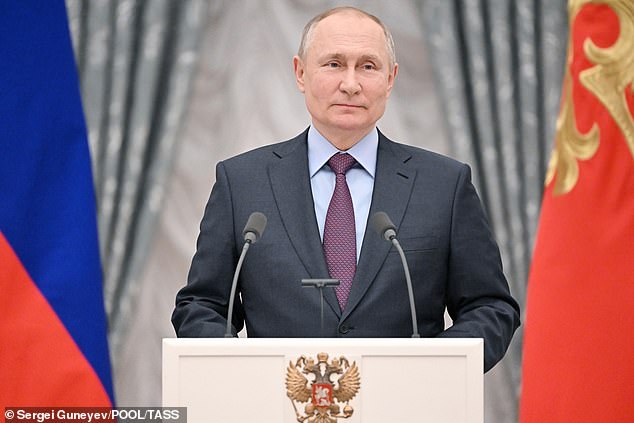 Having fallen more than 10 per cent on Monday, the Moex benchmark fell another 9 per cent in early trading yesterday before clawing back its losses to end the session 1.6 per cent higher.

The Russian market is still down nearly 20 per cent this year.

The rouble also rebounded having on Monday suffered its biggest one-day fall since the Covid outbreak.

The turmoil came as Boris Johnson announced sanctions on five Russian banks and three ‘cronies’ of President Vladimir Putin in the ‘first barrage’ of the Western response to the invasion of Ukraine.

At the same time, Germany halted the approval of the Nord Stream 2 gas pipeline that runs into the country from Russia.

But analysts said the markets bounced back on hopes that full-scale conflict can be avoided. Craig Erlam, a senior market analyst at trading firm Oanda, said: ‘Volatility is the only thing that appears to be certain in the markets right now.

‘There’s no doubt that investors continue to be tempted back in at the slightest hint of diplomacy winning the day.

‘Even after the events of the last 24 hours and all of the rhetoric that’s accompanied it, there remains hope.’

The oil price climbed as high as $99.50 a barrel – the highest level since 2014 – as concerns about conflict in Ukraine and the threat of further sanctions on Russia cast doubt over supplies.

Analysts at JP Morgan said that oil could hit $125 a barrel this spring and rise to $150 next year.

‘While stock markets are enjoying a partial recovery, oil and gas prices remain elevated as a conflict in Ukraine significantly increases the risk of disruptions to Russian supply,’ added Erlam.

‘While there is reportedly no desire to intentionally restrict supplies in the face of further escalation, assurances will be taken with a pinch of salt, given recent developments.’

Russian stocks listed in London, which include the Roman Abramovich-backed steel manufacturer Evraz and miner Polymetal, have been hit hard this year as tensions mount.

Russian funds have also suffered with Liontrust Russia – run by stock picker Robin Geffen – down by more than 9 per cent yesterday and nearly a quarter in the past three months.