Grey was British buyer’s favourite new car colour for a fourth straight year in 2021 – unless they were purchasing a Tesla.

And the boom in Tesla sales hints that white could start becoming more popular – in line with the ‘Apple effect’, with drivers matching their tech-laden electric cars with their gadgets.

Almost a quarter (24.8 per cent) of new cars bought last year were grey, extending its lead at the top of the sales charts, official figures released by the Society of Motor Manufacturers and Traders confirmed this morning.

However, it wasn’t the pick of colours for Tesla fans; the Model 3, which was the UK’s second most-bought new motor in 2021, was most commonly delivered in white. 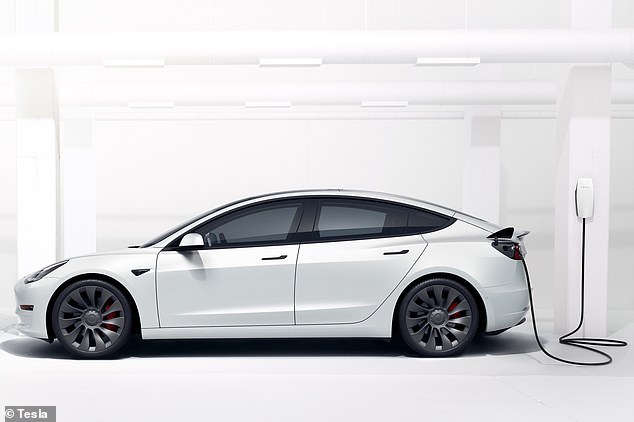 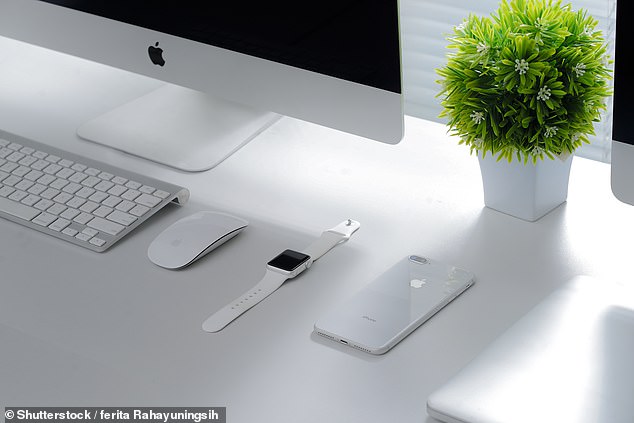 Apple effect: Rising demand for tech-laden electric vehicles could see an increase in white cars on out roads as drivers match their motors to their gadgets

During a year of pandemic-related disruptions impacting total new car registrations, 408,155 grey cars were sold, up 2.8 per cent, the figures show.

Black, which had previously been the most popular car paint in Britain from 2009 to 2012, was chosen by more than one in five (20.5 per cent) of motor buyers, while white was in third place with 17.2 per cent.

It means more than three in five (62.5 per cent) of all new cars entering the road are monochrome shades.

Demand for blue motors rose by 1.4 per cent – the first growth in demand in five years – ahead of red and silver.

A total of 1.6 million new cars were registered in the UK last year, as the global shortage of semiconductors and the impact of the coronavirus pandemic affected sales.

Why grey is so popular

Consumer preference for grey, which comes in many varying shades, can be attributed to a wide range of reasons, according to the SMMT.

Firstly, it can be a sleek and deeper tone than other shades and is also well-suited to black trims and darker wheels and offers an attractive compromise between the also-popular black and white.

However, the biggest driving factor is grey’s wider resale appeal than bright colours, so a potentially ‘safer’ choice, especially as it reduces the visibility of dirt more than the other shades.

Commenting on the car colour data, SMMT chief executive Mike Hawes said: ‘2021 was anything but normal, but British drivers stuck to their familiar favourites of grey, black and white cars.

‘But while last year’s new cars might share the same shades as previous years, under the bonnet there has been a real shift, with one in six buyers choosing to go green.’

And it is this shift to greener models that could spark increased popularity in white cars.

The Tesla Model 3, which was out-sold only by Vauxhall’s Corsa in Britain in 2021, was most commonly ordered in white, with customers choosing it over shades of black, silver, blue and red.

This hints at the previously noted ‘Apple effect’, where people buy items that match the colour of their phones, laptops, smartwatches and tablets.

And white has form with Uk car buyers, it was the most-chosen vehicle colour from 2013 to 2016. 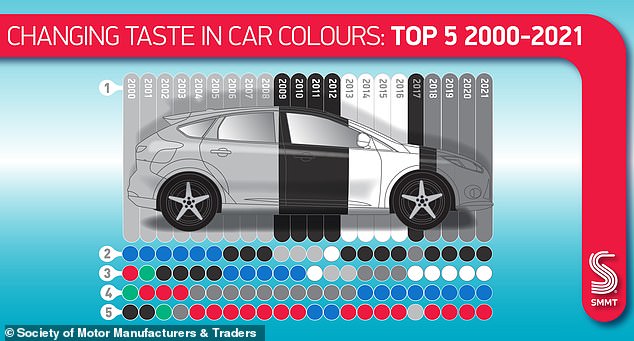 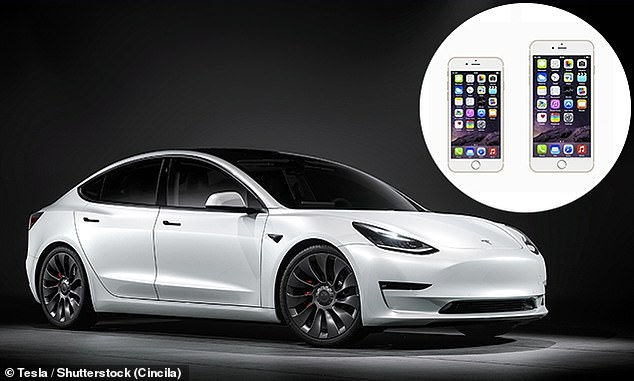 Of all cars sold in 2021, the one most often chosen in white is the Tesla Model 3, which could be a result of customers specifying their motors to match their gadgets, like iPhones 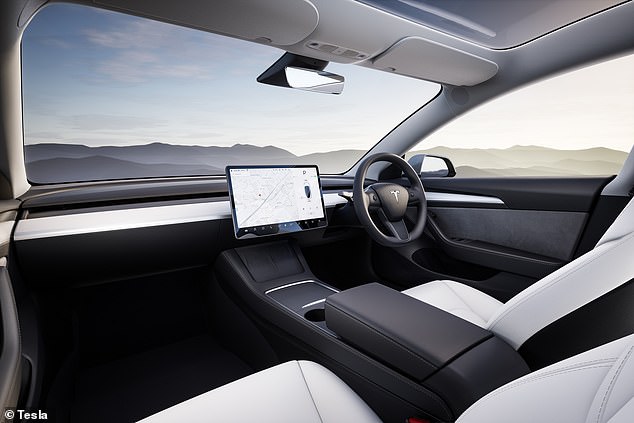 Experts said the rise in demand for white was also bolstered by the fact most manufacturers offer white as a no-cost colour option for their new vehicles.

However, the growth in popularity has since seen white paint come at an extra cost, while less-desirable blues and reds are offered at no additional charge.

White was also the most-common colour for new Vauxhall Corsas, which adds fuel to the claims that its rise to the top of the UK sales charts in 2021 was significantly boosted by demand from businesses.

‘Incentives are helping move the market and should continue, but the speed of this shift to electric must be matched by an acceleration in the pace of charging infrastructure investment.

‘Drivers should expect to be able to recharge irrespective of wherever they live, work or visit.’ 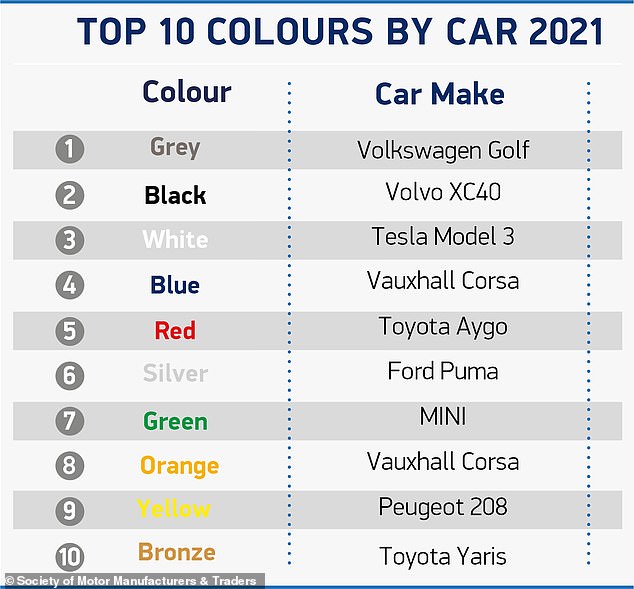 The most-bought car in grey was Volkswagen’s Golf while Volvo XC40s were most commonly black. Green was most popular on Minis, the official figures show 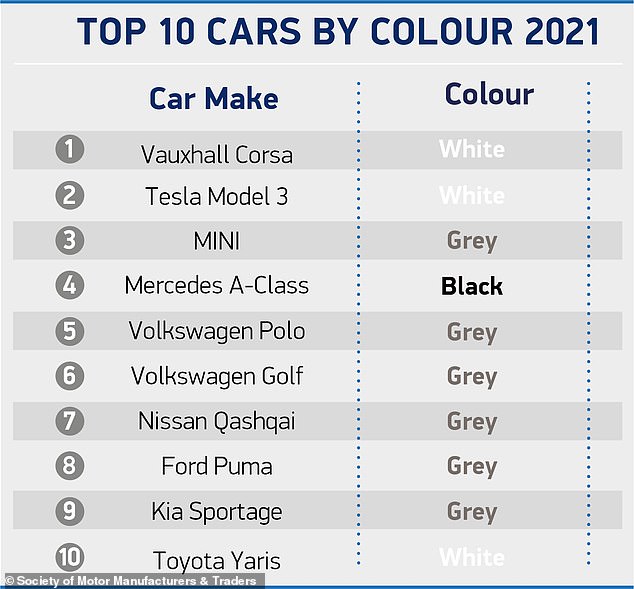 White was the most-common colour for new Vauxhall Corsas, which adds fuel to the claims that its rise to the top of the UK sales charts was driven by demand from businesses

At the niche end of the colour palette, gold, yellow and turquoise were the fastest growing colours for new cars in 2021.

However, together these colours accounted for less than 1 per cent of new cars entering the market.

Records show that Bedfordshire was the county where you were most likely to see a new pink car last year with 66 registrations.