Will tenants bear the brunt of new energy efficiency rules? Half of landlords say they will have to pass on eco refit costs averaging £9k by raising rents

Tenants could bear the financial brunt of new energy efficiency rules for homes, as the majority of landlords have said they will pass on the cost of renovations by raising rents.

More than half of landlords said they would pass ‘at least some’ of the costs of improving their property’s energy efficiency rating on to their tenants, a survey by Shawbrook Bank shows.

Upcoming changes to the Energy Performance Certification will require buy-to-let properties to have a rating of C or above by 2025 in order to begin a new tenancy.

All rented properties, if not exempt, will need to have a C rating by 2028. 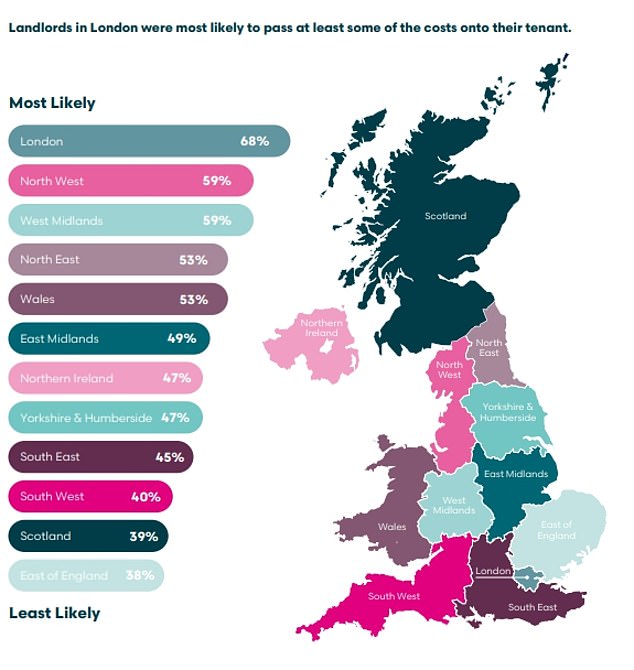 Who pays? Shawbrook asked landlords whether they would pass ‘at least some’ of the cost of renovating their properties to achieve an EPC rating of C on to their tenants

The EPC system grades properties from A to G, with A the most efficient and G the least.

Renovations that can improve a home’s energy efficiency rating include installing better insulation, changing the windows, replacing older appliances with energy-saving ones and installing heating controls such as a thermostat.

Tenants in London are most likely to see these costs passed onto them, Shawbrook said, with 68 per cent of landlords in the capital saying they’d pass at least some of the costs on to their tenants.

Close to a quarter of landlords admitted that their some of their properties were rated D or below for energy efficiency.

When asked how much they thought they would need to spend on making the necessary improvements, landlords estimated that it would cost £5,900 on average to improve their properties.

However, Shawbrook said these landlords may be underestimating the cost, as renovations have become more expensive thanks to labour and materials shortages.

Landlords who had already made improvements to their properties said they had spent £8,900 on average. 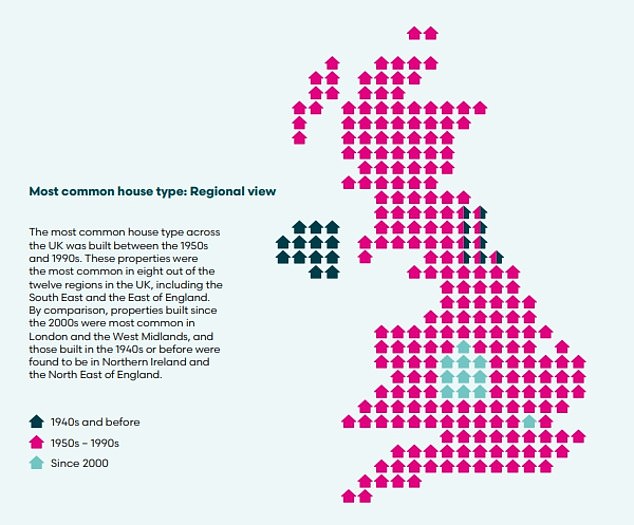 How old? The majority of homes in the UK were built between the 1950s and the 1990s. Older properties are generally less energy efficient

Tenants should see their energy bills fall as a result of the upgrades, though it usually takes many years for the cost of energy efficiency improvements to be fully recouped through lower bills.

It will also not benefit those tenants whose bills are included in their rent.

Shawbrook’s research did suggest that tenants were aware of the EPC rating of their home, however.

Some 28 per cent of landlords reported that tenants had complained to them about their property’s EPC rating.

Emma Cox, managing director of real estate at Shawbrook Bank, said: ‘Our research has shown that landlords may be underestimating the costs involved, leaving them open to unexpected bills.

‘As a result, tenants could be caught in the crossfire as landlords seek to recoup some of the costs.’

She also said that, even if a landlord did not intend to pass on the costs to their tenants, those that did would drive up market rents in the UK as a whole.

‘While tenants can expect to benefit from cheaper energy bills as a result of greater energy efficiency, any savings on bills could be outweighed by a market wide rent rise in 2025,’ Cox said.

The research also said that the upcoming regulations could change the type of properties that landlords buy, leading them to shun older and less energy efficient ones in favour of newer builds.

A quarter of landlords said that they would avoid buying a property with a low energy efficiency rating, while 30 per cent said they would be inclined to buy a property which already held a rating of C.

Perhaps more surprisingly, more than one in 10 landlords (15 per cent), said they would only buy properties that had been built in the last twenty years.

This could have an impact on the wider housing market, as those with older properties could find them harder to sell, or see their value decrease.

harrry
Previous articleFactors That Influence The Pricing Of the Impactful vinyl banners
Next articleSixties AC Ace stripped sown to parts 43 years ago sells for £202.500