The Governor of the Bank of England, Andrew Bailey, has called for wage restraint to stop inflation becoming embedded. I’m sorry, Mr Bailey, but it doesn’t work like that.

Back in the 1970s, there were national pay policies designed to hold down wage increases and that ended in the disaster of the so-called winter of discontent in 1978-9. But now pay is set by the market, in this case, the market for people’s skills, enterprise and hard work.

If employers find that they are unable to attract enough people to work for them, then one of the ways in which they must respond is to pay them more. 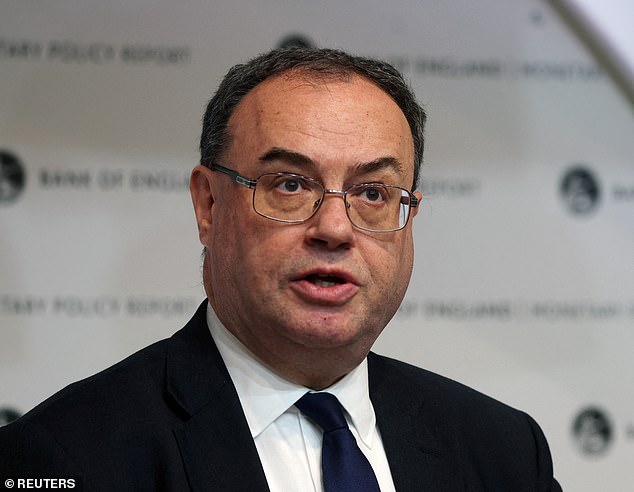 Pay freeze: The Governor of the Bank of England, Andrew Bailey, is struggling to stop inflation becoming embedded

If they find that this means they have to try to use labour more efficiently, then they must do so. It is called increasing productivity, a problem that the UK suffers from and one that the former chief economist of the Bank, Andy Haldane, put a huge amount of work into trying to explain.

(He found, put briefly, that our problem is not the top UK companies, which are outstandingly competitive, but the long tail of underperformers.)

But this is not only a question of increasing productivity. It is also about employers thinking of ways to attract people who have dropped out of the labour market coming back into work.

The Bank has a good scheme designed to help would-be returnees, by the way. It is about making work more interesting and rewarding in non-monetary ways.

It is about learning from other countries that have a higher proportion of people of working age in jobs, notably in Scandinavia.

It is about keeping older people who want to do so in some form of paid activity. And so on.

To say all this is not to get at Mr Bailey, though I can’t help feeling vindicated for my repeated warnings in this column about the danger of inflation turning out much higher than the Bank forecast.

He was asked a question and in answering revealed the thing that he and other central bankers most fear. It is that the present burst of inflation will become embedded.

In other words, higher prices will lead to higher wages, which in turn will push up prices yet more. That was what happened in the 1970s, and which pay policies tried – and failed – to head off.

Eventually the only policy that worked was having a period of much higher interest rates.

Not only are we a long way from that, we actually need a period of higher pay to rebalance the position between wages and house prices.

The average price of a home in the UK is around nine times earnings. That is the highest it has been since the early 1900s. From 1950 through to 2000 it was between four times and five times.

No wonder young people need the help of the Bank of Mum and Dad to buy their first home – or rather people who are fortunate enough to have family help.

This can adjust in one of two ways. Either home prices will fall or wages will rise.

No one should wish for a house price crash, not least the Bank of England, for quite aside from the social and personal misery that would cause, it would also destabilise the economy. So we should hope for a combination of reasonably steady home prices and gradually increasing wages. It will take a decade or more, but gradually we can get back to a situation where people can save enough to own their own home.

What upsets me is not the remarks of the governor, or indeed the performance of the Bank of England in particular in recent years. It is the much wider failure of central bankers worldwide over the past 20 years.

They allowed the banking crisis of 2008 to happen. After that emergency, it was right to flood the banking system with cheap money to keep the global economy moving, but as growth recovered they should have used the period from about 2010 to 2020 to bring interest rates back to normal levels and to claw the money back.

By not doing so they allowed asset prices (not least of homes around the world) to soar, massively increasing wealth inequalities.

Last year, they made the same mistake. They were right to pump the money in, but wrong not to start pulling it back as growth resumed.

In a way I am relieved we have begun the long march back to normal interest rates and the end of quantitative easing.

I just wish the Bank of England, and the other central banks, had begun it a bit sooner.

harrry
Previous articleReasons Why You Should Visit Maryland
Next articleCineworld boss insists: We are NOT in our own disaster movie