HAMISH MCRAE: Ukraine is a blow but recovery will go on


HAMISH MCRAE: What is happening in Ukraine is unbearably horrible in human terms, but in economic terms it is a middle-weight blow


So what happens next? More sanctions on Russia, yes, but what about the impact of the conflict on the global recovery? And what does this mean for us?

Here in Washington, where the economic response to Russia’s invasion of Ukraine is being coordinated, you are aware of a harsh reality. Sanctions will do serious damage to the Russian economy, but they will also damage Europe, particularly Germany, and to a smaller extent the UK. But they won’t cost much to America. It is not at all dependent on Russia for its energy supplies, and it is a net exporter of petroleum products.

It is also, as argued here last week, the best safe haven for global capital. You can see this in the foreign exchanges. The pound started the week above $1.36. On Thursday, it dipped below $1.33 before managing a modest recovery. The hit to the euro was even greater, though it too recovered on Friday. 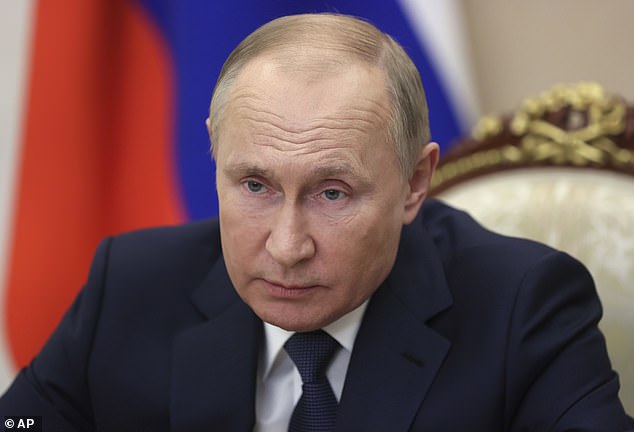 Damaging: Vladimir Putin’s invasion of Ukraine is seen by the markets as a humanitarian catastrophe with powerful political consequences, rather than an economic one

However, the experience of past shocks – including the hit from the pandemic in spring 2020 – is that markets will settle down even before it is clear how damaging the blow will be.

This may seem callous and it is. But global finance looks at the total picture of the world economy, and is taking the view that the likely outcome in Ukraine is not big enough to destroy the general recovery. They see this as a humanitarian catastrophe with powerful political consequences, rather than an economic one.

The plain fact is that there is a practical limit to sanctions. The simple reason is Europe’s energy supplies. Germany gets half its gas and one third of its oil from Russia. The strongest impact on Russia would be for it to be excluded from the SWIFT international payments system. This links banks around the world, enabling them to send money across borders. Everyone who has an account with a major British bank will have a SWIFT number.

Boris Johnson has called for Russia to be excluded from this system. That would be a huge blow, in that it would cripple Russia’s trade. But how then would Germany, and indeed the rest of Europe, pay for its gas and oil?

In theory, energy payments could be excluded, but this would be an invitation for Russia to do exactly what Europe most fears: having its energy supplies cut off.

The markets have been trying to calculate what this might do to the oil price, and the numbers are nasty. The current oil price is around $100 a barrel, and projections are that it could rise to $120 or even $140 if Russian supplies are temporarily halted.

Gas prices are harder to predict but the European wholesale gas price quadrupled last year. So any restriction would hit a market that is already desperately short of supply. Money spent on more expensive energy is money not available to be spent on other things. And if demand for the broad output of any economy falls sharply there is one clear outcome.

My judgment is that if Russia does cut off oil and gas exports to Europe, that makes a recession in Europe this summer inevitable. America can cope, though there is profound concern here about the impact of higher energy prices on inflation generally. But Europe can’t cope without huge economic cost. So if Russia is cut out of SWIFT, it will be because the US forces the EU to follow America’s line.

What should we look for now? The broad expectation of the markets is that there will be some weeks of conflict, and then a ceasefire. Until there is a ceasefire it is difficult to assess the full economic consequences, but there will be three areas to look at.

The first will be the impact on energy markets. Europe will make a huge effort to ensure security of supply. That will include longer-term areas such as investment in renewables as well as more immediate issues such as building more gas storage facilities, and boosting the ability to import liquefied natural gas.

Next, there is the impact on inflation. In very round numbers, what has happened is likely to add about one percentage point on inflation this spring in the UK. In other words, if our Consumer Prices Index was going to peak at 7 per cent, it will now peak at 8 per cent.

Third, financial markets will soon start to look through the chaos and go back to assessing the fundamentals. After all, while Russia is a huge energy producer, it accounts for less than 2 per cent of global GDP. What is happening is unbearably horrible in human terms, but in economic terms it is a middle-weight blow.