Hargreaves Lansdown shares fell 17 per cent this morning as investors swapped trading from home for a return to the office – eating into its profits.

The DIY investing platform revealed that reduced share trading volume and low interest rates resulted in a 20 per cent fall in profits in the secon dhalf of last year.

The FTSE 100 group, which now holds a market-leading 43.3 per cent market share of Britain’s consumer investing sector, saw pre-tax profits fall to £151.2million in the six months to 31 December, down from £188.4million a year before.

HL had been a significant beneficiary of the pandemic, as working from home Britons took up share trading in record numbers, but it said that net new business had fallen by 28 per cent. 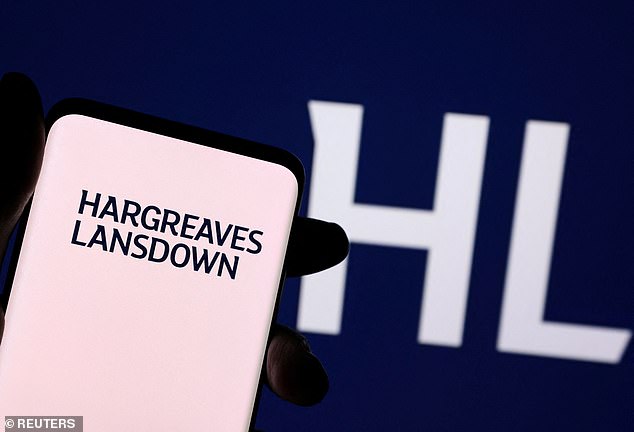 Despite its dominant market position, HL has faced increased competition from the likes of AJ Bell and Interactive Investor

Despite adding £2.32billion in new business in the six months to the end of 2021, there appears to be evidence of the DIY investing juggernaut’s momentum beginning to slip.

HL is under pressure from rival DIY investing platforms pushing for growth, including Interactive Investor and AJ Bell, and new fee-free share dealing apps, such as Freetrade.

However, HL’s total assets under administration – a key metric for a business of this kind – jumped 17 per cent over the six months to £141.2billion, while its client retention rate increased to 92.7 per cent.

But revenue slipped by 3 per cent year-on-year to £291.1million during the period, which HL attributed to lower share dealing revenue ‘as some of the more extreme trading volumes during Covid were not repeated and lower interest on client money’.

Hargreaves Lansdown earns interest on the cash that customers leave sitting in accounts uninvested, which although it is at a low rate is significant due to the substantial amounts held.

Chief executive Chris Hill noted that revenue for the period was ‘only slightly down on last year’, adding that the comparative period at end of 2020 was ‘unique… with market events like Vaccine Monday that drove record-breaking stockbroking volumes, along with very strong net new client growth and net new business’.

Hill said: ‘As management expected, this was not the case in 2021 and we also saw the full impact of the record low interest rates on our revenues.

‘However, the strong performance from fund platform fees (+21%) demonstrates the benefit of our diverse revenue streams and our ability to deliver under various market conditions.’

Elsewhere, the firm revealed its strategy for its ‘next phase of growth’, which will include £175million of investment in HL’s tech capabilities over the next five years and a plan to expand into wealth management.

It said: ‘Now is the right time to target the broader wealth management market and set a new standard for how the UK saves and invests.’

Hargreaves Lansdown shares were down 17 per cent in early trading to 1,074p – and are down a third over the past year. There was some good news for shareholders, however, as HL upped its interim dividend by 3 per cent to 12.26p per share. 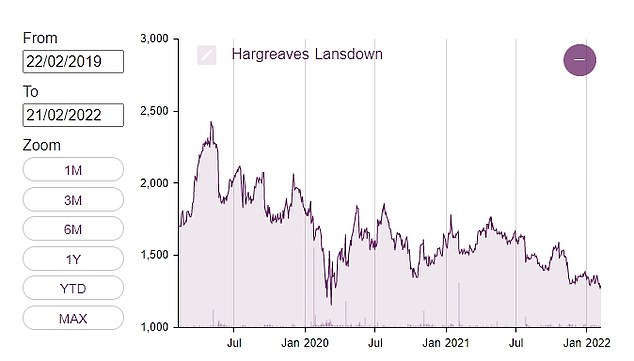 Hargreaves Lansdown shares have declined substantially since before the pandemic

Despite this morning’s significant share price decline, analysts at Peel Hunt maintained their buy rating for HL with a target price of 1,835p.

The analysts said: ‘Hargreaves’ interim results this morning were ahead of consensus expectations (adjusting for strategic investment costs), with the lower levels of profitability reflecting revenue headwinds from both trading activity and prevailing interest rates.

‘The business continues to generate high returns and retains a strong balance sheet (cash of £433million).’

‘The business does have strong long-term prospects, in our view, which should be improved given the strategic elements of today’s update, albeit at some short-term cost.’