Low levels of overseas business travel and tourists coming to Britain has kept Heathrow’s passenger numbers at just over half of pre-pandemic volumes.

Only 2.9 million people transited through Britain’s largest airport in February, compared to 5.4 million in the month before the World Health Organisation declared the Covid-19 outbreak to be a pandemic.

This was despite the United States Government lifting a 20-month international travel ban on non-US residents and citizens flying to the country, leading to an elevenfold year-on-year surge in North American traffic. 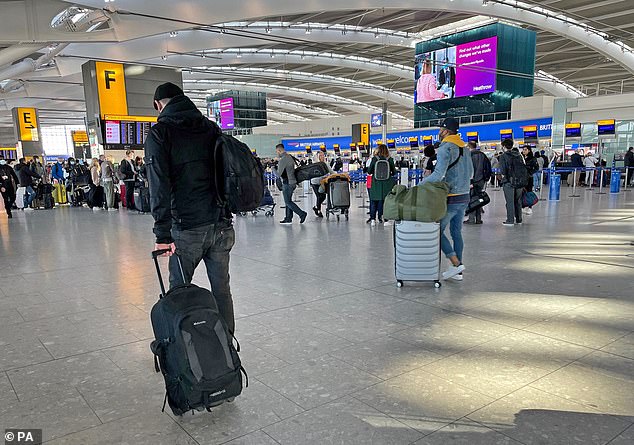 At the same time, traveller numbers on Middle Eastern and European Union routes climbed by over 600 per cent, while the amount of transported cargo rose modestly to within just seven percentage points of its pre-pandemic levels.

But the total quantity of commercial aeroplanes either taking off or landing at the British Airways hub was more than 40 per cent down on 2020 levels at 20,074.

Flight bookings continue to be significantly affected by strict testing and quarantine rules in multiple countries, even as vaccination programmes have enabled countries to loosen lockdown restrictions.

Business travel remains particularly suppressed as companies have cut back expenditure on flights and instead resorted, in large part, to videoconferencing meetings and hybrid working practices.

More recently, the emergence of the Omicron variant of coronavirus, which is more contagious though less deadly than previous variants, has made many people reluctant to book foreign holidays.

On top of this, Heathrow noted that demand is expected to be impacted in the near term by rising fuel prices, worries about new coronavirus variants, and concerns among American travellers about Russia’s full-scale invasion of Ukraine. 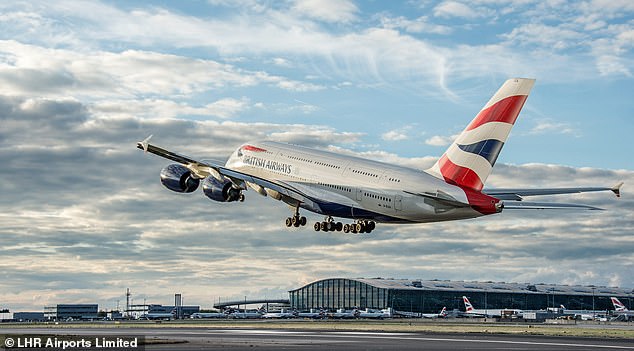 Flying away: The total quantity of commercial aeroplanes either taking off or landing at the British Airways hub was more than 40 per cent down on 2020 levels at 20,074

Yet it said demand among Britons for foreign vacations has been ‘recovering strongly’ and is forecasting bookings during the height of the summer holidays could reach as much as 85 per cent of pre-pandemic volumes.

This is anticipated to put some capacity strain on airlines, airports and handlers, so to cope with this, the West London airport is hiring 12,000 extra people and reopening Terminal 4 sometime before July.

However, it expressed concern that the Border Force agency would be unable to ratchet up its capabilities to meet the predicted rebound in passengers.

The international airport will also be waiting for a decision from the Civil Aviation Authority (CAA) on how much it would be allowed to charge air carriers for using the airport over the next five years.

From the start of 2022, the cap on the amount the airport was allowed to charge airlines on a price per passenger basis was raised from £19.60 to £30.19, a figure below what Heathrow had wanted.

About six weeks before this, the boss of British Airways’ parent company IAG warned that his firm could reduce the number of flights it operates at the airport in the event of increasing customer levies.

Raising such fees would help Heathrow slash the very high financial losses it has posted since the pandemic began, yet airlines like IAG have also made substantial annual losses, so any hike could imperil their revival.

‘But we need to ensure we are geared up to meet peak potential demand this summer and are relying on the CAA to make a fair financial settlement that incentivises investment to maintain passenger service and encourages airlines and Heathrow to work together to grow passenger numbers.’