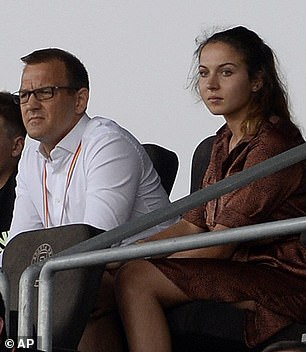 Under pressure: Daniel Kretinsky with his girlfriend Anna Kellnerova

Kretinsky made his money in the European energy industry and is known as the Czech Sphinx because he is famously tight lipped. He has built up a 20 per cent stake in the delivery group.

There has been speculation he may try to buy Royal Mail or force it to spin off its £4billion European parcel business GLS.

But secretive fund giants appear to be calling his bluff amid concerns that Russia’s invasion may put financial pressure on parts of his business empire – which have links to Russian gas giant Gazprom.

Short sellers including Marshall Wace, BlackRock, Millennium Capital and Man Group have taken a combined £115million bet against the postal operator – 3.4 per cent of the shares. Data from IHS Markit shows that is the highest level since September 2020. Short sellers try to profit by gambling on companies’ stock falling. Royal Mail faces pressure from mounting labour and fuel costs amid pressure from unions and as inflation bites.

But Kretinsky himself is also feeling the pinch. His £2.7billion EP Infrastructure (EPIF) owns 49 per cent of Eustream, which operates a system piping Russian gas to central and eastern Europe through Slovakia.

Ratings agency Fitch has put EP Infrastructure on its ‘rating watch negative’ list, flagging its big stake in the pipeline.

Fitch said tightening sanctions on Russia, and Europe’s ‘growing desire to reduce energy imports from Russia’ could hurt Eustream and EP as there is an increased risk Gazprom may not be able to honour its contracts.

But EPIF sources played down Fitch’s concerns. Gas transmission only accounts for around a third of profit, the sources said, adding that EPIF is part of the EP Holding group which includes an electricity generation business that is seeing revenue growth during the energy crisis.

Kretinsky, 46, who also owns a 10 per cent stake in Sainsbury’s and 27 per cent of West Ham United, as well as Sparta Prague football club, is estimated to be worth £3billion. His girlfriend is champion show jumper Anna Kellnerova, 25, daughter of late Czech businessman Petr Kellner, once the country’s richest man.

He swooped on Royal Mail shares in May 2020, as the pandemic spurred demand for online shopping, which boosted the postal firm’s profits. Within months he had become Royal Mail’s largest investor. His stake tipped above 20 per cent in January.

Kretinsky confirmed the original purchase in a statement, but did not give a reason for his interest, and has not commented since. In an uncharacteristically candid statement, a spokesman for EP Holding – where Kretinsky is chairman and majority shareholder – said: ‘There is no connection between the rating change of EPIF and any movement or activity related to Royal Mail’s share price.’

The spokesman said the EP businesses were ‘managed completely separately’ and that Kretinsky’s holding in Royal Mail is held through his investment firm Vesa.

He added: ‘Gas deliveries from Ukraine through the gas transmission system operated by the EPIF Group continue uninterrupted and the EPIF Group’s financial and operational performance has not been significantly impacted by the current situation.’

In 2020, Kretinsky was rumoured to be interested in a takeover of US chain Foot Locker and also tried to buy German retailer Metro.

The Communications Workers Union, which represents postal workers, is seeking a new pay deal as its current agreement ends this month. It is pushing for a pay rise to match inflation, and higher overtime rates.

Gerald Khoo, an analyst at private bank Liberum, has cut his profit forecasts for the next two years by £329million as a result. In a note advising clients to sell the stock, he said: ‘Royal Mail has very limited scope to adjust its pricing to compensate for a more expensive wage settlement in the UK.’

JPMorgan analysts warned that a reduction in parcel volumes and deliveries of Covid testing kits could hit revenues, but it still believes Royal Mail’s long-term prospects are positive.

The biggest single short position is a £58million bet against the shares by Marshall Wace, the influential hedge fund set up by Brexit-backing tycoon Sir Paul Marshall and his business partner Ian Wace.

Marshall Wace’s position was first disclosed in January with the remaining trio of funds emerging in the past two months. The funds will already have seen a paper profit from their bets as the stock has dropped 28 per cent to £3.54 since January 10, the day the first short position was disclosed. 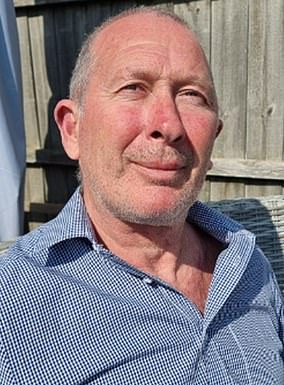 A postman has hit out at the ‘culture of bullying’ at Royal Mail after resigning from a 32-year career with the business.

Christopher Davies accused his managers of bullying when he returned to work after taking time off in the immediate aftermath of the death of his infant grandson in 2019.

‘I was very distressed watching my child hold her son as he passed away,’ he told The Mail on Sunday last week. ‘I’ve had several meetings with my managers in which they repeatedly antagonised me and shown no empathy towards the loss of my grandchild. It’s disgusting how I’ve been treated and it comes from a culture of bullying.’

Davies, 56, who lives in Essex, resigned last week after being signed off work for seven months with stress.

Last year, a former Royal Mail manager was awarded nearly £230,000 after a tribunal said he had been subjected to harassment and discrimination at work.

A spokesman for Royal Mail said: ‘We are committed to creating a working environment where all our colleagues are able to thrive, and do not tolerate any form of bullying or harassment.

‘We thoroughly investigate all reported allegations of such behaviour, and then take appropriate action in each case.’