The average price tag on a home put up for sale has rocketed by nearly £8,000 in the space of a month, as ambitious sellers back the pandemic property boom to continue.

The £7,785 jump to mid-February was the biggest month-on-month increase in cash terms recorded by property listings giant Rightmove in more than 20 years of its reporting.

It means the average asking price across Britain now stands at a record £348,804 – a rise of nearly £40,000 in the two years since the pandemic started, compared with just over £9,000 in the previous two years.

The average asking price for a home is 9.5 per cent higher than a year ago, marking the highest annual rate of growth since September 2014, Rightmove said. 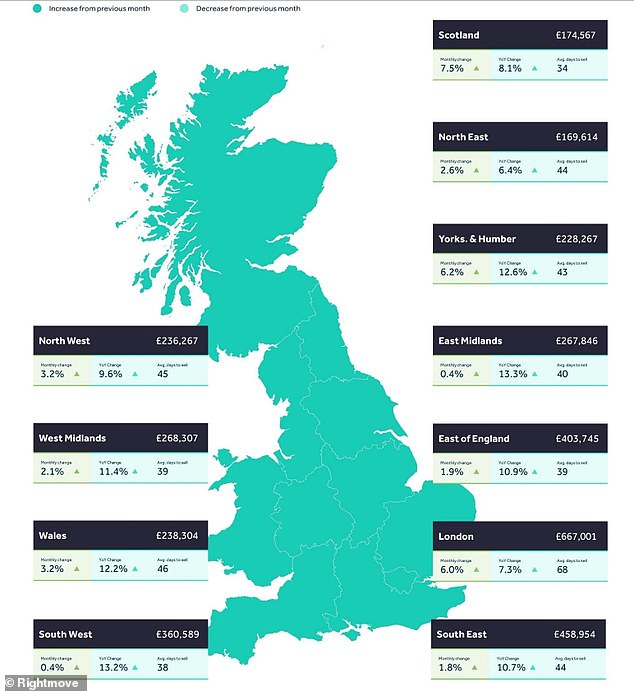 London saw its highest annual rate of asking price growth since 2016, or 7.3%, in February, but remains well behind many other regional locations, with the East Midlands seeing the greatest inflation at 13.3%

February’s price growth is being driven by the ‘second stepper’ sector – a category of buyers who may find themselves in need of more space and are now ready to move on from their first homes.

As some workers are being encouraged to return to the office, London has seen a particularly big jump in home buyer inquiries, Rightmove said.

Buyer demand generally is 16 per cent higher than at this time in 2021.

Tim Bannister, Rightmove’s director of property data, said: ‘We now have a group of movers who are looking to return closer to major cities, or at least within comfortable commuting distance.

‘High demand and a shortage of available stock are supporting a rise in prices and a new record average asking price this month.

He added: ‘A fear of missing out on one’s dream home is really driving market behaviour at the moment, as movers look to do all that they can to avoid the disappointment of being too slow to secure their ideal property.

‘We’re seeing buyers sending more enquiries for available homes than usual, and doing everything that they can to put themselves at the top of the list.’ 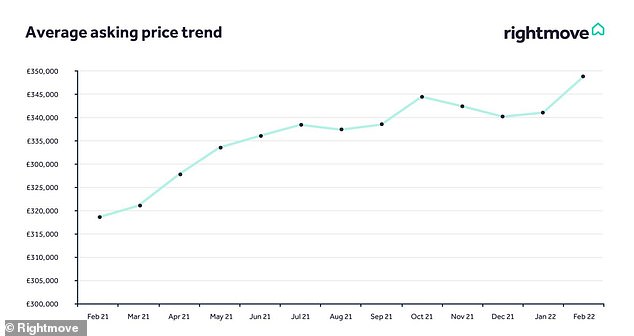 Average asking prices rose by 2.3%, or £7,785 in February – the biggest monthly jump in cash terms recorded by Rightmove in more than twenty years of reporting

Activity from both buyers and sellers has increased this month, with the number of new sellers listing their homes for sale up by 11 per cent.

The number of people requesting a home valuation from an estate agent was also up 11 per cent in January compared to last year.

‘The data suggests that people are by no means done with their pandemic-driven moves,’ Bannister said.

‘Such a significant societal event means that even two years on from the start of the pandemic, people are continuing to re-consider their priorities and where they want to live.’

High demand and shortage of properties is continuing to prop up prices, despite the rising cost of living affecting many people’s finances, especially first-time buyers’.

‘Despite rising costs and rising interest rates, the data right now shows demand rising across the whole of Great Britain, with many people determined to move as we head into the spring home-moving season,’ Bannister added. 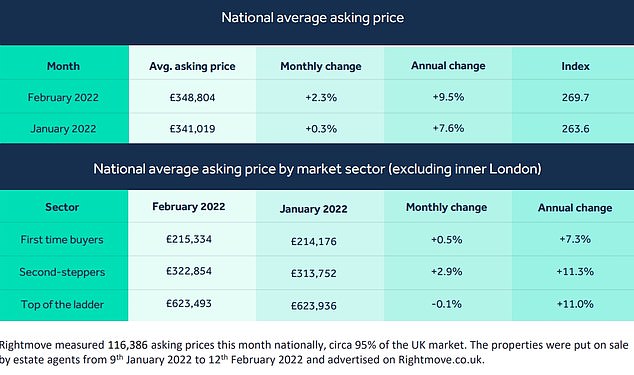 Second-steppers homes have seen the largest increase in prices this month, says Rightmove

Average asking prices for first-time buyers’ properties have risen 7.3 per cent over the last year, compared to 11.3 per cent increase for second-steppers’ homes and 11 per cent for top of the ladder homes.

Geoff Garrett, director of mortgage solutions firm Henry Dannell, said: ‘It remains very much a sellers market and the continued increase in asking price expectations demonstrates this, as buyers are further stretched in order to secure a home.

‘However, with high chances of at least two further interest rate increases over the course of this year, those purchasing with the help of a tracker or variable rate mortgage will notice their monthly costs climb significantly.’

As the final pandemic restrictions now look to be ending, and returning to the office is encouraged or required by many businesses, the London property market is accelerating.

The capital recorded the biggest jump in the number of buyers sending enquiries of any region (+24 per cent), a new price record, and its highest annual rate of price growth since 2016, or 7.3 per cent.

The East Midlands and South West saw the fastest rate of growth, with average asking prices rising 13.3 per cent and 13.2 per cent respectively compared to a year ago.

The North East saw the slowest pace of annual growth at 6.4 per cent, while prices in Scotland rose 8.1 per cent.

Ben Hudson, managing director at estate agents Hudson Moody in York, said homes continued to be in short supply, despite some improvement.

‘As soon as anything new comes onto the market, it is flying off the shelf, with multiple buyers competing for the final sale,’ he said.

‘With so many potential buyers, many properties at the moment are selling above asking price, which can make valuing a property accurately a challenge as we don’t want to give unrealistic expectations.’

But he added: ‘We are going out to value more properties, and seeing more new listings come to the market for sale, and we are seeing signs of a busy, but more traditional spring season.’

harrry
Previous articleBella Hadid Has Pivoted from Grandpa Style to Grandma Style
Next articleFashion Bombshell of the Day: Sade from London