Property prices increased 10.8 per cent in the year to December 2021, according to the latest official data.

However, experts have suggested that the rising cost of living is beginning to put a dampener on the exceptional price growth of the past 18 months. 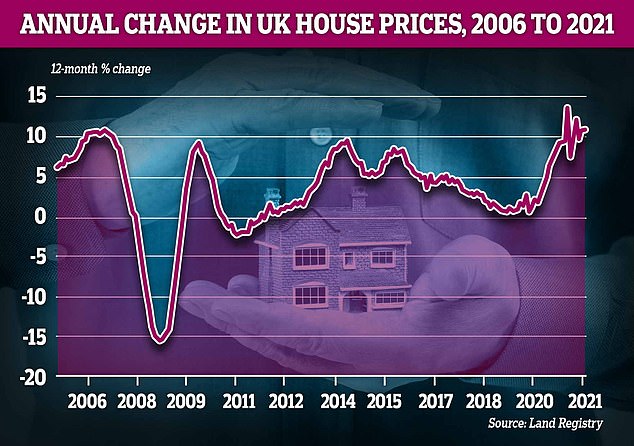 Slowing growth? House prices have increased exponentially in the past 18 months, but experts say that prices could start to increase at a slower level due to the rising cost of living

In the month between November and December 2021, the average cost of a home increased 0.8 per cent on a non-seasonally adjusted basis, or around £2,000.

The previous month had seen an increase of 1.2 per cent.

Jeremy Leaf, north London estate agent and a former RICS residential chairman, said: ‘On the face of it, these figures show the housing market continuing its inexorable rise but maybe that isn’t the case.

‘Looking behind the numbers we see prices, though a little historic, are virtually unchanged from the previous month.’

Experts put the slowing growth down to increases in inflation and the cost of living, which could affect people’s appetite to spend money on moving home.

This has been compounded by increasing mortgage rates.

Emma Cox, of Shawbrook Bank, said: ‘Interest rate rises and the rising cost of living are making the property landscape challenging and may only get more difficult as the year progresses.

‘For all potential buyers, securing a competitive mortgage with a fixed rate will be imperative.’ 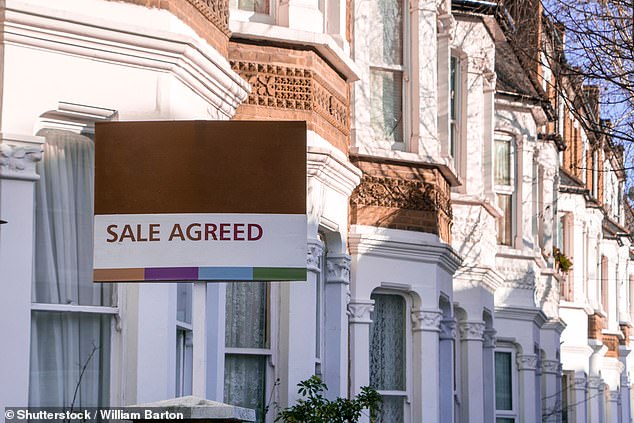 Looking at different countries, Wales saw the greatest house price increases in the year to December at 13 per cent. The average house price in Wales is now at a record level of £205,000.

Northern Ireland remains the cheapest UK country to purchase a property in, with the average house price at £159,000.

The South West was the region with the highest annual house price growth, with average prices increasing by 13.6 per cent in the year to December 2021.

The lowest annual house price growth was in London, where average prices increased by 5.5 per cent over the year to December 2021.

However, this growth is much higher than earlier in the pandemic was growth was as little as 1 per cent annually, leading some to predict a London recovery.

Jonathan Burridge, founding adviser at hybrid mortgage adviser, We Are Money said: ‘We are likely to see some regional adjustments during 2022, as there are a lot of headwinds facing the economy at present.

‘London house prices are starting to recover from the Covid dip, but other areas may not do so well.’

Despite being the region with the lowest annual growth, London’s average house prices remain the most expensive of any region in the UK, reaching a record level of £521,000 in December 2021.

The North East continued to have the lowest average house price at £147,000, having surpassed its pre-economic downturn peak of July 2007 in January 2021. 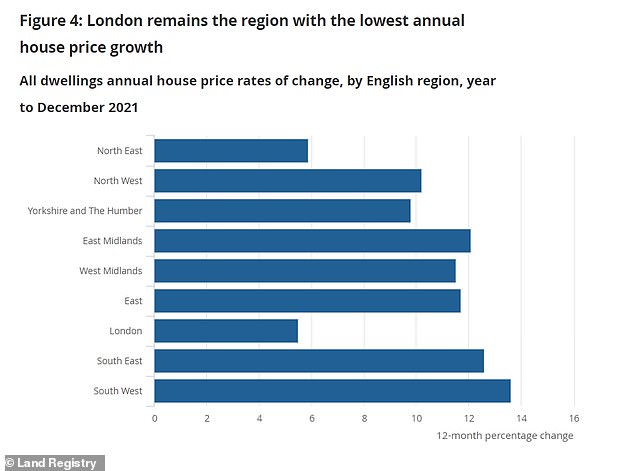 While price growth may be set to fall, a property crash is not being predicted.

James Forrester, managing director of estate agent Barrows and Forrester, said: ‘It’s hard to remember a time when the property market has been firing on all cylinders for such a sustained period and we continue to see numerous areas driving top line market performance forward at quite some rate.

‘Of course, this rate of growth isn’t sustainable for ever and we expect to see some natural correction in the coming months.

‘This certainly won’t come in the form of a house price collapse, but those thinking of selling would be wise to do so sooner, rather than later’